Gulf states to introduce medical testing on travellers to 'detect' gay people and stop them from entering the country. Bahrain, Kuwait, Qatar, Oman, Saudi Arabia and the UAE already outlaw homosexuality, but are toughening their controversial stance.

Kuwait's director of public health says 'gays will be barred'. A medical test being developed by Kuwait will be used to 'detect' homosexuals and prevent them from entering the country – or any of the Gulf Cooperation Countries (GCC), according to a Kuwaiti government official.

GCC member countries – Bahrain, Kuwait, Qatar, Oman, Saudi Arabia and the United Arab Emirates – already deem homosexual acts unlawful. This controversial stance is being toughened, according to Yousouf Mindkar, the director of public health at the Kuwaiti health ministry. Kuwait: The Gulf state is said to be developing a test that willl 'detect' gay people.


He told Kuwait newspaper Al Rai: ‘Health centres conduct the routine medical check to assess the health of the expatriates when they come into the GCC countries. However, we will take stricter measures that will help us detect gays who will be then barred from entering Kuwait or any of the GCC member states.’

Those taking part in homosexual acts in Kuwait, if they’re under 21, can receive a jail sentence of up to 10 years. Earlier this month Oman newspaper The Week was suspended over an article that was deemed to be sympathetic to homosexuals, according to the BBC.

It’s illegal to be gay in 78 countries, with lesbianism banned in 49. Five countries mete out the death penalty to gay people – Iran, Saudi Arabia, Sudan, Yemen and Mauritania. Homosexuality is punishable by death in five countries - and illegal in 78. 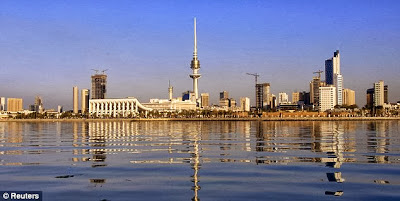 WHERE HOMOSEXUALITY IS PUNISHED BY DEATH

Iran: Since 1979, the government has executed more than 4,000 people charged with homosexual acts. A non-adult who engages in consensual sodomy is subject to a punishment of 74 lashes.

Saudi Arabia: Although the maximum punishment for homosexuality is execution, the government tends to use other punishments - such as fines, prison sentences, and whipping - unless it feels that homosexuals have challenged state authority by engaging in social movements.

Sudan: For homosexual men, lashes are given for the first offence, with the death penalty following the third offence. 100 lashes are given to unmarried women who engage in homosexual acts.For lesbian women, stoning and thousands of lashes are the penalty for the first offence. Today, the issue has divided some religious communities. In 2006, Abraham Mayom Athiaan, a bishop in South Sudan, led a split from the Episcopal Church of Sudan for what he regarded as a failure by the church leadership to condemn homosexuality sufficiently strongly.

Yemen: Homosexuality is still illegal in Yemen in accordance to the country's Shari'ah legal system. Punishment ranges from flogging to death.

Australian and Indonesian Intelligence agencies strongly believe that Noordin Mohammad Top the poofter-terrosist was also responsible for 2002-October Bali-bombing which killed more than 200 including 88 Australians, 27 Britons, and 7 Americans.)