On 26 September 2012 former US president Bill Clinton paid a private visit to the Mark Hotel on 77th Street in New York City to meet Burma president Thein Sein staying there to attend the UN General Assembly.

According to a Burmese Government insider Bill Clinton personally relayed to Thein Sein Saudis' deep concern for the Burma's harsh treatment of Bengali-Muslim illegals on the Bangladeshi border and he also warned him of eventual Kosovo-like dire consequences if Burma still refuses to cooperate with Saudi-funded OIC.

Bill Clinton scared him so much in that 2012 September meeting in New York our president Thein Sein during the 2012 October Arakan Riots had given the Burma Army a brutal shoot-to-kill order against Yakhine Buddhists to immediately stop the race riots.


Later he even ordered the Army to disarm the whole Yakhine-Buddhist populace to prevent future anti-Bengali-Muslim riots. Even the kitchen knives were taken away from the Nationalist Yakhine households back then.

And our soldier-turned-politician President Thei Sein is doing that again now by cracking down hard on the native Yakhin-Buddhist nationalists and local 969 movements the self-proclaimed Protectors of Race and Religion as the instigators behind the devastating anti-Islam race riots in Thandwe just last week.

President U Thein Sein even admitted privately -- at the end of his first ever visit to the Arakan as the president -- that he had well-founded suspicions that the RNDP and 969 groups were deliberately instigating anti-Muslim race-riots in Thandwe to coincide with his planned well-publicized State visit to the Yakhine State. Thandwe race-riots began on September 28 but the disturbances got worse during the days (ie. October 2 & 3) while he was in Thandwe Town.

In the dark night of October-2 several Lone-Htain (Security-Police) men fired indiscriminately at the group of patrolling Yakhine-Buddhists and later into their houses in the Dwar-mhyaung Yakhine-Buddhist Village near Buu-ma-daw Bengali-Muslim Village in Thandwe Township.

Lone-Htain police had so far killed ten innocent Yakhine-Buddhists and wounded at least 50 more Yakhine-Buddhists in the name of restoring law and order in the riots-torn township of Thandwe in troubled Arakan State.

There is a serious confrontation brewing between Government’s Security-Police battalions and the restive Yakhine-Buddhist populace despite the mediating efforts by the Township and Ward administrations.

According to the local Yakhines some of them Buddhists are even asking the help of Yakhine National Army the former Yakhine-Buddhist insurgents now under a cease-fire agreement and in the process of negotiating a peace deal with the Union Government and Burma Army.

At least ten local Yakgine-Buddhists suspected of inciting race-riots in Thandwe from September-28 to October-2 last week have been arrested and now being interrogated by the dreaded Security-Police (Lone-Htain) following a direct order from president Thein Sein.

According to the Narrinjara News Agency based in neighbouring Bangladesh U Maung Pu the Twonship Chairman of RNDP (Rakhine Nationalities Development Party) and five Yakhine-Buddhist men were taken away in handcuffs after hated Lone-Htain policemen raided their house just before midnight of October-2.

Following was the October-3 telephone confirmation of Lone-Htain’s midnight raids and the arrest of his fellow Yakhine-Buddhists of Thandwe from Khaing Pyi Soe the Township Secretary of Thandwe RNDP.

“Yes, they arrested our RNDP Chairman U Maung Pu at about 10:45 pm last night. They also arrested two from the ‘Association for the Protection of Race and Religion’ in Thandwe. We also knew of the arrest of three more from our RNDP.”

According to Khaing Pyi Soe the arrested were U Maung Pu (a) U Saw Hlaing, Kyaw Kyaw, Myint Moe Aung, and Win Ko Lay, all Yakhine-Buddhists from RNDP. Other two arrested were U Thein Win and U Thein Zan from the Association for The Protection of Race and Religion a local 969 Buddhist grassroots movement.

“I have been trying to find out the legal reason for their arrests from the local authorities. I called the District Administrator and he just said he didn’t know anything about the case. The Thandwe Township Administrator also denied any knowledge of the arrests. I believe the Lone-Htains did arrest our people without any firm evidence,” added Khaing Pyi Soe the Township RNDP Secretary.

Ko Maung Phyu a senior member of Thandwe RNDP also told Narainjara that they have been waiting at Thandwe Police Station to see the arrested men but police wouldn’t let them see their arrested comrades.

“Just this morning I found out about their arrests by the Lone-Htain police. All six men including our Township Chairman. We’ve been told that they are now in the police cells at Thandwe Police Station. But we still don’t know why they were arrested, yet,” said bitterly Ko Maung Phyu.

Thandwe police have so far confirmed that only Adul Yarsut (a) Kyaw Zan Hla the Bengali-Muslim man and Nyi Nyi Lwin and Kyaw Min Htaik the two Yakhine-Buddhist youths -- whose confrontation with the Muslim Adul Yarsut started the devastating race-riots which resulted in 5 Muslim deaths and many more Bengali-Muslims and Yakhine-Buddhists wounded and some still missing -- have been arrested and still in their custody.

Police HQ In Naypyidaw Announces the Arrests of RNDP personnel

In the afternoon of October-3 Police-Lieutenant-Colonel Min Aung from Myanmar Police HQ in Naypyidaw informed the press that the two Yakhine-Buddhist men -- suspected of throwing rocks at the shop-house owned by Adul Yarsut (a) Kyaw Zan Hla the Bengali-Muslim who started the fight which led to the race riots in Thandwe -- have been arrested and charged under Crime Act’s Section-336/427.

He also informed the press that the six Yakhine-Buddhist men -- suspected of setting fire to the shop-house owned by Adul Yarsut (a) Kyaw Zan Hla the Bengali-Muslim who started the fight which led to the race riots in Thandwe -- have been arrested and charged under Crime Act’s Section-436/427.

“At present they are arrested as the suspects in the stage of being interrogated by us. They are not confirmed as the culprits, yet, as we are still doing our job of investigating what exactly had happened last few days in Thandwe Town. If sufficient evidence is not found against the arrested men we will release them soon,” added Police-Lieutenant-Colonel Min Aung from Myanmar Police HQ in Naypyidaw.

All under the watchful eyes of Senior-General Min Aung Hlaing's Burma Army now patiently standing on the sideline, not in their barracks yet. What the bloody hell is going on in Burma? 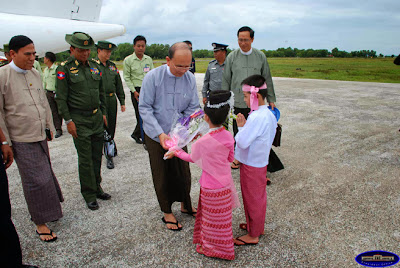 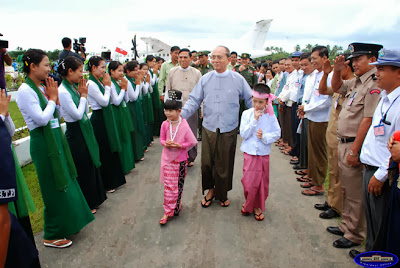 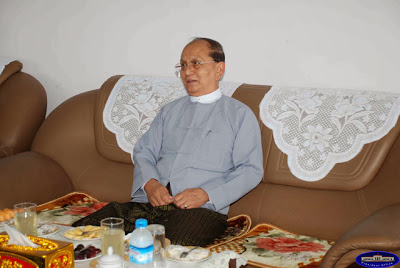 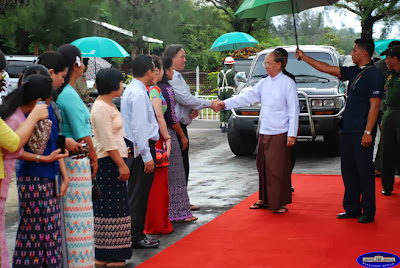 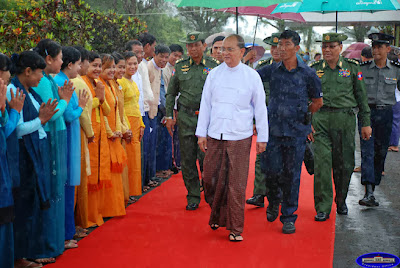 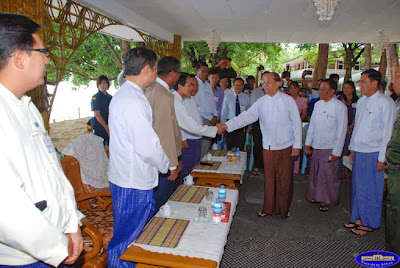