(Daniel Greenfield’s article direct from the FrontPageMag on October 18, 2013.)

“I want at least 1,000 to 2,000 to die in one day,” Shahawar Siraj told an NYPD informant. The Pakistani illegal alien and Muslim bookstore employee was discussing his plans to kill as many New Yorkers as possible. “I’m going to fuck this country very bad.”

But before Siraj and his collaborator could bomb the 34th Street subway station at Herald Square in New York City, they were arrested. Their plans to bomb the subway and Macy’s department store came to nothing. But under Bill de Blasio, the New York Police Department would never have been allowed to lay a finger on them.

Some years later, Ahmed Ferhani was telling an NYPD undercover detective about his plan to bomb churches and synagogues.   He talked of blowing up “the biggest synagogue” in Manhattan, dressing up as a Jewish worshiper, planting a bomb and walking away.


What both cases had in common was a lack of external leads. They weren’t Al Qaeda members. Their attacks would have been as much of a shock as the Boston Marathon bombings or the Fort Hood shootings. They were the “lone wolf” Jihadists who have become today’s terrorist threat.

During the primary, Bill de Blasio tried to hide his radical pro-terrorist views by claiming that he wouldn’t interfere with the NYPD’s counter-terrorism efforts. Now that he’s the nominee and ahead in the polls, he feels comfortable enough to tell New Yorkers that he will not allow the NYPD to protect them from Muslim terrorists.

A terrorist attack has to be stopped in one of two ways. Law enforcement can hope that the terrorist will screw up his plot the way that Faisal Shahzad, the Times Square bomber, did. Or they can proactively carry out surveillance and use informants to “trip” the next lone wolf attacker into revealing himself before he kills a dozen, a hundred or a thousand New Yorkers.

If the Boston cops had followed the NYPD’s lead and maintained a steady surveillance of the terror-linked Islamic Society of Boston attended by Tamerlan Tsarnaev and then sent in an informant to probe him after some of his outbursts, the Boston Marathon bombings would never have happened. 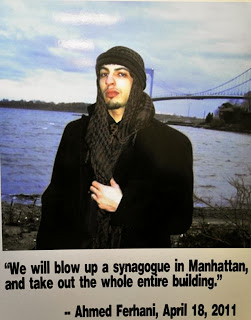 These are the very measures that the radical Socialist turned so-called Progressive Bill de Blasio has promised his Muslim allies he will destroy.

In 2011, Muhammad Yusuf began assembling a bomb based on instructions from Al Qaeda’s Inspire Magazine. Similar instructions were used by the Tsarnaevs in their bombing of the Boston Marathon. If not for an NYPD informant, Yusuf’s bomb would have gone off killing New Yorkers.

A year later, Quazi Mohammad Nafis’ plot to detonate a 1,000 pound car bomb outside the Federal Reserve Bank was shut down by an informant working with the NYPD and the FBI.

Muslim political activists and their Socialist media allies, now cheering for Bill de Blasio, responded to every terrorist plot shut down by the NYPD by ignoring the number of New Yorkers who would have died, dismissing the terrorists as mentally ill or incompetent, accusing the NYPD of entrapping them and perversely calling for an end to the surveillance of Muslim terrorists and terror mosques.

And they would have said the same thing if the Tsarnaevs had blabbed to a police informant and been nabbed on the way to the marathon with dummy bombs in their backpacks. Now if Bill de Blasio wins, the pro-terrorist lobby will finally get its way.

There was only a thin blue line preventing the Boston Marathon bombings from happening in New York. That thin blue line is now one election away from being cut to pieces. Bill de Blasio vowed to shut down the NYPD’s counter-terrorism efforts while standing side by side with Linda Sarsour.

Sarsour had said that the NYPD had invented most of the terrorist plots, that Malcolm X had been assassinated by the NYPD, that the underwear bomber had been a CIA agent and that New Yorkers who celebrated Bin Laden’s death are now “no better than the slimes that Gaddafi and Osama were.”

It isn’t the first time that Bill de Blasio made a deal with the devil. Before he began his career in New York politics, he supported the Marxist FSLN terrorists of Nicaragua who had attacked a synagogue, burnt Miskito Indians alive in a church and whose leader recently hosted Mahmoud Ahmadinejad.

Bill de Blasio has refused to apologize for supporting a terrorist organization that murdered Indians and Jews; instead defending his allegiance to the Sandinista killers as “progressive.” 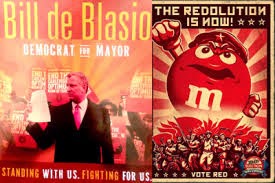 According to the New York Times, Bill de Blasio told other members of the pro-FSLN Nicaragua Solidarity Network “of a need to understand and build alliances with Islam, predicting it would soon be a dominant force in politics.”

That much he has done.

Weatherman terrorist Bill Ayers urged Bill de Blasio to “be very proud of the fact that he supported the Sandinistas.” Ayers had participated in the 1970 bombing of the NYPD headquarters that wounded seven police officers.

In his memoir “Fugitive Days,” he writes, “We threatened to bomb a major symbol of American injustice, and when a little more than two weeks later the promised bomb exploded in the New York City Police Headquarters on Centre Street, the Weathermyth was fully launched.”

De Blasio has revealed himself to be a man who sympathizes with terrorists and who is supported by terrorists. It’s no surprise we’ve now learned he wants the NYPD to turn a blind eye to terrorism.

If Bill de Blasio wins, when the next Muslim terrorist says, “I want at least 1,000 to 2,000 to die in one day”; there will be no NYPD informant to hear him and no NYPD detectives to stop him. 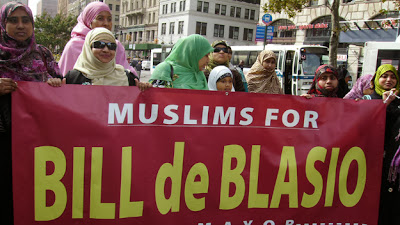