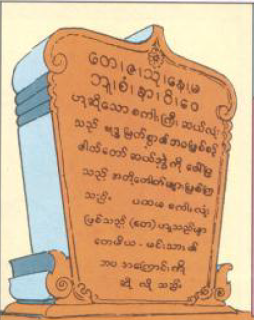 The very first word of the ten-words acronym is Tay which stands for Tay-Meet-Ya the ancient Indian prince.

And this story is the life of Prince Tay-meet-ya who eventually will be reborn again for the very last time as Prince Theik-dart-ta (Siddhatha) in the year 563 BC. 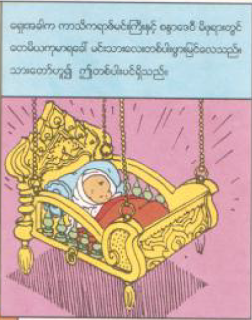 A long, long time ago in a small kingdom, in now is present-day India, Queen Sandar-day-wee the chief-queen of King Kar-theet-ka-riz gave birth to a handsome baby prince named Tay-meet-ya Ku-mar-ya.

He was the only son for them. 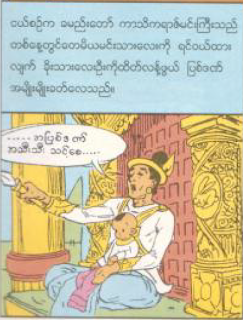 One day when Prince Tay-mmet-ya was a young toddler sitting on the lap of his father King Kar-theet-ka-riz, the King sentenced four convicted thieves to various severe punishments.

"You all are sentenced to these punishments.........," said King Kar-theet-ka-riz on the throne with his son sitting on his lap. 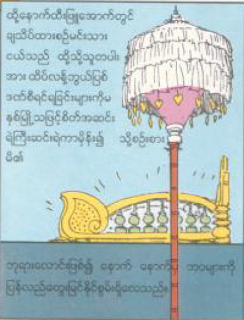 Later while he was put to bed under a white parasol the little princess started thinking about seeing his father meted out horrible punishments to criminals.


As the future Buddha he could see clearly all his past lives and also his future lives. 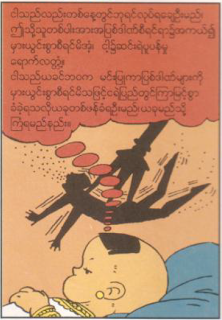 "I''ll become a king one day and I'll have to punish criminals like what my father has to do. And if I make mistake and wrongfully punish some innocent one I'll go to hell again.

I had been to hell once for very long time when I was a king in one of my past lives and I punished innocent ones wromgly. And it will happen again in this life when I become the king again," thought horribly the little prince. 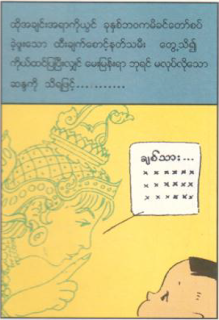 Suddenly the angel who is the Parasol guard and also the former mother of little prince seven life before show herself to the prince and asked him what was bothering him.

Once she knew what exactly was bothering her former son she whispered an advice to him. 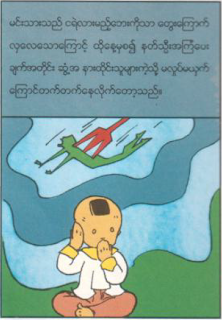 From that day onward our Prince Tay-meet-ya had started behaving like he was deaf, dumb, and mute as per the mother-angel's advice. He really didn't want to be the king again.

So he just sat up straight on his bottom quietly and didn't respond to anyone around him from that day. He was determined to avoid the hell in his next live. 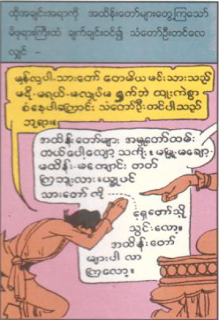 Once his nurses and carers noticed his strange behavior they immediately reported to his mother the queen.

"Your majesty Great Queen, our baby Prince Tay-meet-ya has suddenly been behaving strangely. He hasn't been smiling or crying and he is just sitting quietly without moving at all for a while and we are worried and concerned!" reported frightfully the chief nurse.

"Oh, you women are so incompetent, don't you all know how to take care of a baby prince? Okay, bring my son to me right now," ordered the Queen. 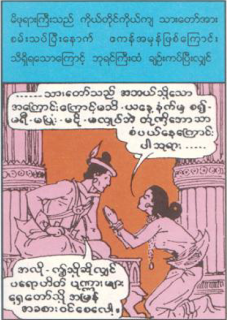 The Queen then checked out her son and soon realized what the nurses were saying about him was true. So she immediately went to see her husband the King.

"Your majesty my darling King, our son Prince Tay-meet-ya has been behaving strangely. Since this morning he hasn't cried or smiled or moved at all. I'm really worried," reported the Queen.

The King was concerned too. So he immediately summoned his Ponnars (Royal Brahman Priests) for their advice. 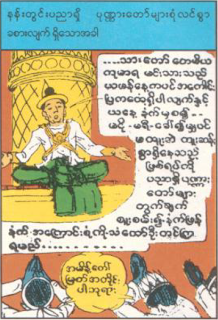 Once all his Brahmans were kowtowing right at his feet he ordered them, "My son Prince Tay-meet-ya was his normal-self just yesterday, but since this morning he hasn't cried or smiled or moved about at all. I now order you all my loyal Brahmans to investigate and report your findings and suggestions to me tomorrow morning!"


And the Brahmans replied to him to do exactly what he ordered, "As your Majesty's command we'll investigate the matter straight away." 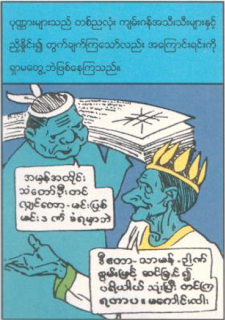 Despite spending the whole night browsing through all their ancient scrolls the wise Brahams couldn't find a reasonable explanation for Prince Tay-meet-ya's strange behavior.


"If we report this honestly to our king he will get angry and punish us harshly," said one Braham to his fellow Brahmans.


"We should think of giving him some wise advice to avoid that, shouldn't we?" One older Brahamn suggested and the rest all agreed. 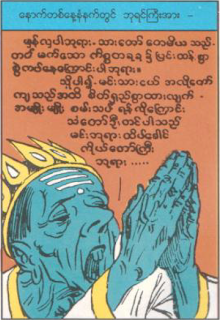 In the early morning of next day they went to the king and reported this.

"Your Mjesty, our Prince Tay-meet-ya, in our wise collective opinion,  appears to have a very strong desire for some thing unknown.

Our advice accordingly is to provide every desirable thing we think of to the baby prince just to find out what he really desires, your Great Majesty." 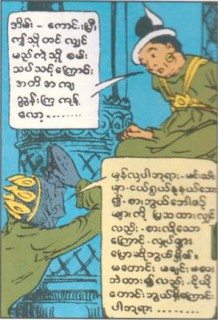 "Okay, okay, I accept your opinion. But you must tell us exactly how we're gonna find out what the prince really wants," ordered the great king.

"Yes, your majesty, he is only a toddler and his desires are for food and toys only, and he would have started moving about if he were shown all the tasty food or toys he always loved.

If we then didn't give him any of his desired food or toy he would have started crying and asking for them and that would break his silence," replied the wise and cunning Brahmans. 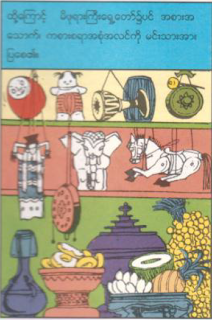 So the nurses and carers kept the young price with his queen mother and brought so many yummy foods and latest toys and showed them to Prince Tay-meet-ya. 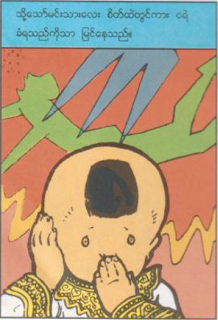 But in Tay-meet-ya's mind he was seeing only him being in hell despite all the foods and toys placed right by him. 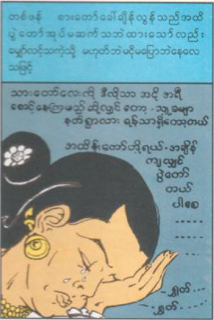 So the queen tried another tactic and denied her son a meal even though his meal time was well overdue. But the young price still refused to break his silence despite his extreme hunger. Finally the queen had to give in and give him his regular meal.

"If we wait for him to cry or love he will just die from starvation. Please, nurses, just let my son eat, please,      ,shuut, shuut," cried out the mother Queen. 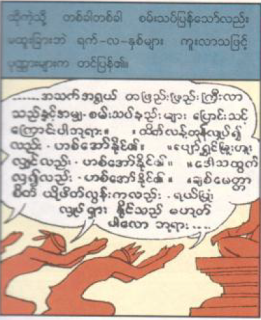