(News article direct from The Clarion Project on October 9, 2013.) 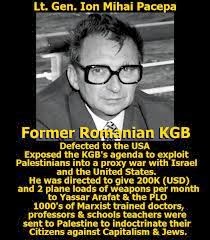 Lt. Gen. Ion Mihai Pacepa is the highest-ranking defector from the former Soviet bloc. He fled to the U.S. in 1978 when he was the deputy chief of Communist Romania’s foreign intelligence service. He was also a top advisor to Nicolae Ceausescu, the country’s Soviet-allied leader.


Ryan Mauro: Why would the Soviet Union sponsor the growth of radical Islam if that ideology also hates communism?

Ion Mihai Pacepa: Because they have another, more important thing in common: anti-Semitism. Long before we had the Holocaust in Germany, we had the Russian word pogrom, defined by an authoritarian Russian dictionary as the "government-organized mass slaughter of some element of the population as a group, such as the Jewish pogroms in tsarist Russia."

And long before we had Hitler’s Mein Kampf, we had the Protocols of the Elders of Zion, a tsarist Russian anti-Semitic forgery that became the basis for much of Mein Kampf and for today’s new anti-Semitism.

The KGB community, when I was at its top, spent many years and huge amounts of money to turn the Islamic world into an explosive enemy of the United States. Islam and the Arab world, Andropov told me in 1972, were a petri dish in which we could nurture a strain of America-hate, grown from the bacterium of Marxist thought. Islam’s doctrine of soul-purifying jihad was the twin to our own soul-purifying romance with revolutionary nihilism.

The Muslims’ anti-Semitism ran deep. We had only to keep repeating our disinformation—that the United States was a war-mongering, Zionist country financed by Jewish money and run by a rapacious “Council of the Elders of Zion” (the KGB’s derisive epithet for the U.S. Congress), the aim of which was to transform the rest of the world into a Jewish fiefdom.

Although we now live in an age of technology, we still do not have an instrument that can scientifically measure the results of Andropov’s sustained disinformation operation. It is, however, safe to presume that the cumulative effect over 20-plus years of disseminating millions of copies of the Protocols of the Elders of Zion throughout the Islamic world and portraying the United States as a criminal Zionist surrogate should have made some dent.

September 11, 2001 is another heartrending proof of that. Few people noted that on that same day, the KGB was celebrating 124 years since the birth of its founder, Felix Dzerzhinsky. A videotape depicting the grisly decapitation and dismembering of Wall Street Journal reporter Daniel Pearl in 2002 offers further evidence that Andropov’s strategy succeeded. Pearl was gruesomely murdered only because he was an American Jew.

Pacepa: Unfortunately, Russian anti-Semitism is still alive and well. Prof. Rychlak and I have documented this in our new book, Disinformation. Here, let me give just two examples.

In August 1998, one of my former colleagues in my other life, General Albert Makashov, a member of the Russian Duma, alleged that the Jews were being paid by American Zionists to ruin the motherland, and he called for the “extermination of all Jews in Russia.” Over and over, Russian television replayed his screaming in the Duma: “I will round up all the Yids [pejorative for Jews] and send them to the next world.”

On November 4, 1998, the Duma endorsed Makashov’s pogrom by voting (121 to 107) to defeat a parliamentary motion censuring his hate-filled statement. At the November 7, 1998 demonstration marking the 81st anniversary of the October Revolution, crowds of former KGB officers showed their support for the general, chanting “hands off Makashov!” and waving signs with anti-Semitic slogans.

On August 3, 2001, a letter from 98 U.S. Senators expressing concern about the rise of anti-Semitism in the Russian Federation was sent to President Putin. It stated: “In years past, the U.S. Senate has been united in its condemnation of such virulent anti-Semitism, which, unfortunately, has been present during much of Russia’s history. Your remarks last year publicly condemning anti-Semitism assume special significance against a backdrop of centuries of tsarist and Stalinist persecutions. We strongly encourage you to continue to publicly condemn anti-Semitism whenever it manifests itself in the Russian Federation. We also believe that it is important to back up the rhetoric of condemnation with the substance of action.”

In January 2002, however, Jewish leaders from the Siberian city of Yekaterinburg reported to the prosecutors in Moscow that the Russian Orthodox Church had reprinted the Protocols of the Elders of Zion alleging Jewish plans to overthrow Christianity, and the priests were now selling it to the population. Nevertheless, no prosecutorial action was taken.

Aleksi II, the Patriarch of Moscow during those day was working for the KGB under the codename “Drozdov” and was awarded the KGB Certificate of Honor, as was revealed in a KGB archive accidentally left behind in Estonia when the Russians pulled out.

Mauro: Did the Soviets focus only on promoting anti-Westernism in Islam, or did they include other religions?

Pacepa: The Soviets did not focus only on creating anti-Westernism in Islam, but on creating anti-Americanism all over the world. The Kremlin’s main enemy was the United States, and during the Cold War, its intelligence community did everything in its power to transform the old European and Islamic anti-Semitism into a new hatred for the "Zionist America," whose supposed goal was to convert the rest of the world into a Jewish fiefdom. 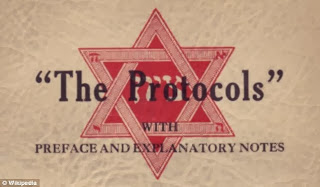 I spent 20 years of my other life promoting anti-Americanism, and I became familiar with the bloc's immense disinformation machinery charged to spread hatred for America. During the Cold War, more people worked for that machinery than for the Soviet army and defense industry put together. A significant part of that machinery was headquartered outside the Soviet Union, pretended to be independent international entities and published its own newspapers in French or English. All, however, were manned by our undercover intelligence officers.

Most of these international Potemkin villages survived the collapse of the Soviet bloc, and they are proclaiming the same anti-American messages as during their heyday. Google them. You'll find them on the internet. Or go to Disinformation. All are in that book.

Mauro: The Clarion Project has written that Russia may be implementing the Operation Sarindar plan in Syria, a secret plan that you first exposed. When you worked for the East bloc, was such a plan specifically for Syria mentioned? Do you believe it's being enacted today?

Pacepa: I do not know. During those days, Syria was the Kremlin's most important ally in the Arab World, and its government was being run by Soviet political and razvedka (foreign intelligence) advisers, who did not share their experience with normal mortals like us. 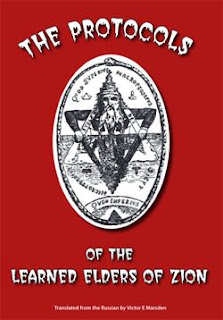 There is reason to believe that Russian advisers are still powerful in Syria, and that they can do whatever the Kremlin wants. On July 12, 2006, militants of Hezbollah (“Party of God”), a deeply anti-Semitic Muslim fundamentalist group based in Lebanon but armed by Putin’s Russia, launched a powerful rocket attack against Israel.

Mauro: Radical Islamic terrorism has become an increasing problem for Russia since the collapse of the Soviet Union. Doesn't that make it logical that Russia and the U.S. should ally against a common enemy?

Pacepa: Radical Islamism may create some domestic problems in Russia, but Islamic terrorism was born in the KGB, which is now running Russia, and during my 27 years in the KGB community I never knew Moscow to drop any of its successful operations. It seems this is now the case with terrorism.

In October 2010, the same Hezbollah, born in the KGB in the late 1970s, conducted a drill simulating the takeover of Israel. The European Union-sponsored Gulf Research Centre, which provides journalists an inside view of the Gulf Center Region, found out that Hezbollah’s military forces were armed with a large quantity of the “Soviet-made Katyusha-122 rocket, which carries a 33-lb warhead.”

Hezbollah also possessed the infamous Russian Scud missiles, as well as Russian antitank missiles AT-3 Sagger, AT-4 Spigot, AT-5 Spandrel, AT-13 Saxhorn-2, and AT-14 Spriggan Kornet. 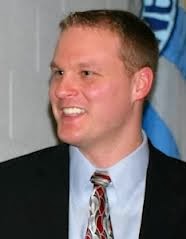 (Founded in 2006, the Clarion Project (formerly Clarion Fund Inc) is an independently funded, non-profit organization dedicated to exposing the dangers of Islamic extremism while providing a platform for the voices of moderation and promoting grassroots activism. The Clarion Project draws together Middle East experts, scholars, human rights activists and Muslims to promote tolerance and moderation and challenge extremism.


Ryan Mauro is the ClarionProject.org’s National Security Analyst, a fellow with the Clarion Project and is frequently interviewed on top-tier TV stations as an expert on counterterrorism and Islamic extremism.)
Posted by Hla Oo at 12:43 AM