Rangoon the former capital of Burma now known as Myanmar is tightly gripped by mass-hysteria driven by extreme fear and loathing of Muslims as so many bombs believed to be planted by Muslim terrorists have been exploding recently all over the city and other smaller cities across Burma.

Just last night (October-14) a crude time bomb deliberately left in the bathroom of Traders Hotel’s Room-921 exploded at 11:30 pm and seriously injured a 43-year-old American woman. She and her husband and two young Children had just checked into the hotel at about 12:00 am that day.


Before that two teenagers were seriously wounded by another home-made bomb left on roadside in Thar-kay-ta Township of Rangoon when they tried to open the package at about 5:40 pm on October-13.


At about 8:45 pm on October-11 a 29-year-old policeman and a young woman were killed by a bomb left in their room at Chan-Myae Guest House in Taung-ngu Town. One young woman also in the room was wounded and later taken to the hospital.

Those are just few major cases of Muslim bombers trying to kill and maim people of Burma as there were more cases of unexploded bombs left in Rangoon and other cities across Burma.

The bomb left in the Room-921 on Traders’ Hotel’s ninth floor by the last guest -- a Burmese Muslim man holding a Malaysian passport -- exploded at about 11:30 pm on October-14. Mrs Piaiorst a 43-year-old American mother of two young children was slightly injured as the bomb went off in the bathroom.

She and her husband and their two kids just checked into Room-921 at about 12:30 pm that day. She suffered wounds on her left thigh, left buttock, right forearm, and left side of her back and she reached Rangoon General Hospital’s ER at about 11:40 pm that night.

The whole ninth floor of the hotel was evacuated and the guests re-accommodated in the vacant rooms on other floors. Her family is still in the hotel as the police and army personnel cleared the hotel and the adjacent areas.

Police alleged that after planting the bomb in the bathroom he hurriedly left the hotel in a taxi, paying the driver a very generous 70,000 kyats. But he apparently dropped his Burmese NRC card (National Registration Card) in the taxi which led police to his where about and his arrest.

He was described unofficially by the police as a Muslim and a former Burmese national now holding a Malaysian passport which he used to check into the Traders Hotel in Rangoon.
Malaysian Muslim Couple Left a Bomb in Mandalay Restaurant

The crude time-bomb rigged with an M-67 hand grenade was left under the table-24 of popular Shwe-Bae (Golden-Duck) restaurant at the corner of 16th and 80th streets in Mandalay. The Muslim-looking couple at the table left the restaurant in the late morning of October-14 after just a short sit-down there.

They had deliberately left the bag containing the time-bomb under the table, but the diligent waiter thought that they had forgotten their bag and he picked it up and followed them and tried to return the bag to them.

They initially refused to take it back but eventually take it and after a few steps away from the waiter boy they dropped the bag at the corner and ran away as if their lives were in serious danger. By then the waiter became suspicious and opened the bag and found the bomb inside. He surely was either a brave boy or a stupid boy as he nearly blew himself up.

The restaurant staff fearfully left the time-bomb on the kerb of 16th street and immediately called the police. Later the army’s bomb-disposal team from Mandalay Field-Engineers Battalion came and tried to defuse the clicking time bomb which contained an M-67 Hand grenade rigged to a table-clock powered by a pack of 6 AA-size batteries.

But team’s brave efforts to defuse the bomb were futile and eventually they covered the bomb with car-tyres and sandbags and blew it up with some explosives.


Police then took the photos from CCTV and looked for the Muslim-looking couple all over the town and finally caught them near that famous U Pain Bridge a tourist attraction in Mandalay at about 6:00 pm on same day October-14.

The suspect couple are both Malaysian nationals holding Malaysian passports but the man was a former Burmese national and Bengali-Muslim named Mohammad Thar Lay (a) Aung Aung a son of Soe Lwin. 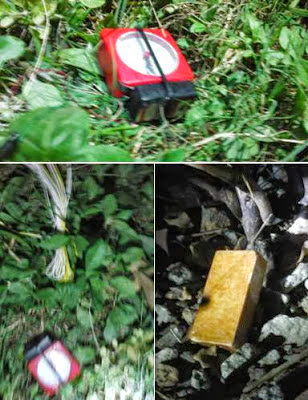