(Maung Maung Khin, recently deceased, originally was a student warrior from the Battalion-701 of notorious ABSDF-North and he acted in 2008 Sylvester Stallone’s overly-exaggerated anti-Burmese movie Rambo-4 as the ridiculously-sadist Burmese-Army-Colonel Tint. This post is the translation of his article from KOZAN Blog.) 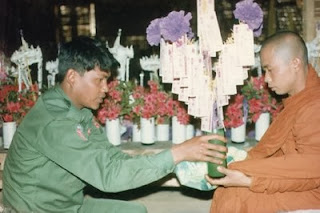 My head was spinning and light-headed because of excessive bleeding from my wound, my lack of sleep, and all the cordite smoke I’d been inhaling. I also reckoned that Ba Nyar might be feeling the same as me.

After having sewed and bandaged our flesh wounds our men brought rice and curry for us. The curry was a beef curry. Once after the meals we began to feel sleepy. So they let us sleep and when we woke up we were told to go stay at the hospital. So we went to the field hospital and the Medic there took our names and then showed us a place to lie down.

Field Hospital in the Jungle

They even assigned Kachin traditional doctors to cure us and they collected herbs from the jungle and treated us old ways. They crushed a kind of medicinal leaves and gave it to Ba Nyar. For me I had to eat some other leaves three times a day.

In that battle we two were the least-seriously-wounded among all the wounded as most other Kachin comrades were badly wounded. And not to make our wounds becoming infected we were not fed any food except Suntan (pickled-cabbage-leaves) soup. In the jungle you couldn’t go buy food, so we basically starved. 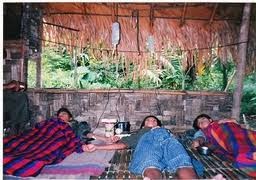 Luckily we two had a small can of sweetened-condensed-milk (Noh-zee) we grabbed out off the stores captured from the army soldiers at the battle. We generously add hot water and drank sweet milk out of that single can.

But next day we had to prepare for a long march as the order to immediately abandon the camp was given by the KIA Tactical Command after a top level meeting at the Command Psot. Enemy Burmese army now knew we were here after the devastating battle and they were sending many mobile columns to engage us again. So we were to retreat back to our camps on China border.

But we had so many wounded and most were unable to walk at all. So they were to be carried on makeshift stretchers. On the way the column had to cross a wide lake. As the time was raining season the lake was filled to the rim with water and when we crossed the water reached to our shoulders.

Across the Wide Lake into the large Field of Reeds

It was almost impossible for the wounded on the stretchers not to get wet even though the carriers had lifted the stretchers high up to the max with some difficulties. Comrade Ba Nyar was wounded on his back and so he was to walk. But he couldn’t just walk across the lake as his back wound would get wet. So we tied a large plastic jerry-can to his belly and he basically swam on the watertight floating jerry-can across the lake.

Once we reached the far side of the wide lake a large field of reeds nearly average-man’s height welcomed us. The seemingly endless field of reeds made me feel tired and exhausted. After more than one hour struggling through the reeds we started seeing ubiquitous In hardwood trees here and there.

My experience was telling me then that this field of reeds was going to end soon and I was right. Very soon we came out of the reeds and found ourselves in a small forest of same tall In trees. We still didn’t get too far as our column was long and numerous. We still had to march day and night as our wounded comrades needed to be ASAP at Chinese border where medical facilities were waiting for them.

Sand, A Lot of Sand are Troubling Us 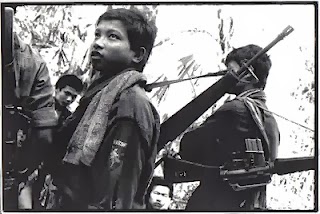 Two days after the beginning of our journey many people were straggling behind our long column. Walking unprotected in constant rain kept us wet especially the lower extremities of our bodies. Walking through so many patches of water had another troublesome problem. Sand trapped inside our jungle boots.

By then we all had sand-rashes on our feet. When we took of our water-soaked jungle boots at the rest stops we found our foot dried and wrinkled and red and inflamed. If we walked barefoot even on grass it was horribly painful.

My head-wound was also getting worse as smelly pus filled in it and came out constantly. Finally after three days and nights walking non-stop our long column had reached the mighty river Irrawaddy. On the west bank, of course, and we still had to cross the river. That night we slept in the jungle on the riverbank for early morning crossing.

The crossing took place at a site just above the town of Sinbo. We got up at 3 in the early morning and walked a short distance to the site of crossing. When we reached the riverbank we could see five small boats paddled by local villagers sympathetic to our cause. And they ferried our column of nearly a thousand rebells across the river back and forth in almost total darkness.

When our turn to cross the river the time was almost 6 in clear morning and sun had come out and everything was visible. Once we reached the east bank of wide Irrawaddy we had to continue on walking. We then had to across a small creek entering the Irrawaddy.

The creek had very little water but its banks were steep and high. Fortunately the villagers had cut down a small tree trunk and laid it cross the creek. The tree-trunk bridge had rickety bamboo hand rails on both sides so people could just walk on the round trunk safely holding onto the bamboo hand rails.

But when we reached the bridge the trunk was muddy and slippery as so many of our men had already walked on it before us. With a heavy backpack and the equipment belt and rifle on me I had a hell of time walking on that tree-trunk-bridge without falling nearly ten feet down into the murky creek waters. 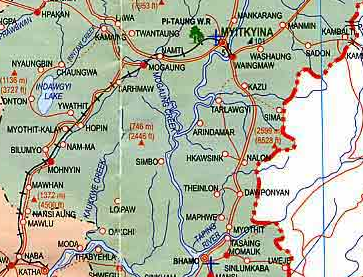 As soon as I was on the slippery log-bridge I ran into the cloud of small jungle mosquitoes. Those mossies bit me like hell and the pain was unbearable as if my face was sprayed hard with rough sand.

And my skin was especially allergic to mossie bites. While I was on the bridge I had to let go my one hand off the bamboo hand rail sometimes and rubbed away the crowded mass of blood-hungry mossies from my face and my ears so that the pain was slightly bearable.

It took only few minutes to cross the bridge but I felt like it was a lifetime as the pain was killing me. Once I was on the other side and out of that crowded mossie cloud I had to stop to rub the pain of my face. I had never been bitten by jungle mossies like that before.

When I took out a small mirror and looked my face in it I found my face was horribly covered with itchy bumps all over and painfully swollen. But I still had to catch up with the column ahead and about 30 minutes later we found them taking a meal rest at an abandoned-farm.

Since all our rear guards had already crossed the Irrawaddy River we all stopped at that abandoned-farm to cook and eat our brunch (Breakfast and lunch together) there.

Running out of Salt to Cook

When we tried to cook at that abandoned-farm we all found we had no salt. For jungle-dwelling rebels like us the essential food is rice and salt. The rest we hunted the wild animals in the jungle and also foraged the jungle floor.

Second day after crossing the Irrawaddy we totally ran out of salt. When we asked the NLD-LA and KIA men on our column we found out they were facing the same problem as us. So we had to walk next whole day eating two meals of cooked-rice and roasted-hunted-meat without any salt at all.

In the rugged mountainous country we were in back then, it was exhausting to march on foot as we were sweating a lot and losing large amount of body salt without any salt replenishment. We were now so weak sometimes I thought I was going to faint right there while on my tired feet walking long hours up and down the mountains.

Then I suddenly remembered an old Burmese poem about using Bamboo ashes as salt from my middle school years back at home. So when the cooking time came I burned some dried bamboo and collected the ashes and poured them generously into the meat stew boiling in our canteen Hangaw.

By then most of our men were around the fire hungrily waiting for the stew and I asked one man to taste the boiling stew. He tasted a spoon full and immediately spat it out complaining that it was so fucking bitter and he wouldn’t eat that shit. So I tasted myself and found it so bitter I had to throw away the whole hangaw and start new one without my improvised salt-cum-Bamboo-ashes. 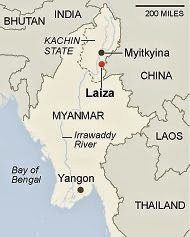 Anyway make the long story short, after two days and two nights walking non-stop on jungle trails we finally reached the Narlone Village on the east bank of Narlone Stream which is basically the western edge of our KIA-controlled territory.

By then we had walked hundreds of miles across the rugged territory. KIA administration there at Narlone fed us plenty and also summoned many bullet-carts from the village to transport our wounded and sick. When our column left Narlone for Chinese border it was like a long religious procession because of that many bullock-carts in our column.

And there always was a small Burmese-army-outpost on the bank of Narlone Stream right across the village and the enemy soldiers usually took pot shots whenever they saw a KIA column in their vicinity. But that day they didn’t fire upon us. They might have thought we were too many and afraid to upset us by firing at us.

We left Narlone early morning and we reached the village of Laiza on Chinese border late afternoon that day. Each house in Laiza village accommodated two or three of our men that night. We left Laiza for our ABSDF camp in Nau-yar-par.

At that camp we were welcomed by our own ABSDF comrades. After staying only one day at Nau-yar-par we continued on for our ABSDF HQ at Parjau’s Laisenbong. When we arrived the ABSDF HQ was busily preparing for the four years anniversary of 8-8-88 (Four-Shits) Uprising.

Back At Parjau and Out Of My Daydream

When I was still dreaming of my last operation trip the Four-Shits Anniversary ceremonies ended. But I was still in my seat and still daydreaming when the camp-policeman Myint Zaw Oo startled me by loudly asking “Why are you still here? Time to go back.”

Only then I got myself back from the dreams and came back to our barracks together with him. On our way the heavy Kachin rain suddenly came down and soaked us both. Then I remembered my eleven fallen comrades including Comrade General-Secretary Myo Win.

“Rest In Peace comrades,” I prayed for them in the rain while inside of me was silently weeping for them.