(Compilation of translated posts from Shin Wirathu’s Blog in July 2014.)

Only two men -- one Burmese-Buddhist and one Bengali-Muslim -- were killed but more than 20 Burmese-Buddhists were seriously injured by the Muslim rioters in Mandalay in July one and Two.

For Burmese-Buddhists the particularly alarming aspect of this Muslim riot is that unlike previous anti-Muslim riots all over Burma the perpetrators of this riots mostly were Bengali-Muslim mobs not the usual Burmese-Buddhist mobs.

The Muslim-riots-affected area by the Saudi-Funded giant “Joon Mosque” occupying the whole city block bounded by 27th, 28th, 81st, and 82nd streets in downtown Mandalay have been a Bengali-Muslim stronghold for many years now.

And once the news of Buddhist-Muslim confrontations broke out all those Bengali-Muslims armed with swords and spears and other home-made weapons had come out in force from that area and attacked any Burmese-Buddhist they found on the streets of Mandalay those two days.

And this is the compilation of background crime facts and direct interviews with the victims of Bengali-Muslim rioters in this July Muslim riots in Mandalay the second largest city in Burma now known as Myanmar.

Burmese-Buddhist Htun Htun was killed by a more-than-thirty-strong group of Bengali-Muslims at the corner of 83rd and 34th streets during the early night of July-2. A Burmese driver for Shwe-kyay-zi Free-Funeral-Society our Htun Htun that day was just coming to work for an emergency-shift because of Muslim riots when his motorbike was attacked by blood-thirsty evil Bengali-Muslims.

His pillion rider was another Burmese-Buddhist named Maung Htway who has survived. Htun Htun saw the crowd at the intersection of 83rd and 34th streets and thought they were Burmese and stopped his bike.

Htun Htun was instantly killed by the Bengali-Muslims there but Maung Htway with minor injuries on his head from the sword-wounds managed to run for his life and reached a Burmese crowd gathering then at 35th and 83rd streets just a block away.

He got back to the spot where they were attacked within five minutes. But they were too late as Bengali-Muslim mob had already disappeared with their motorbike and other valuables such as mobile-phones and cash. Following was his interview with Shin Wirathu after he was discharged from Mandalay Hospital.

Htway: We were heading towards 84th and 34th intersection after we were called form the Free Funeral Society to take the Burmese-Buddhist wounded there to hospital. Just before 84th we ran into Kalar (Bengali-Muslims) mob on 83rd Street. There were more than thirty Kalars there. Htun Htun was the driver of our motorbike and I was the pillion rider.

Wirathu: Why did Htun Htun stop there?
Htway: When they were stopping us by hailing from the dark we thought they were our Buddhist people. Only when we stopped we found they were motherfucking Kalars. Pardon my language, I am still angry.

Wirathu: Then what happened exactly?
Htway: The Kalars first asked to give them our wallets and hand-phones.

Wirathu: Then?
Htway: Htun Htun at the front gave them his two hand-phones and wallet with 100,000 kyats inside. I at the back also handed them my hand-phone and my wallet.

Wirathu: Bloody Kalars were robbing you two blind at sword-points!
Htawy: Yes, they were. The big Kalar with sword in his right hand and standing right in front of Htun Htun took his stuff with left hand and suddenly swung his sword and nearly cut off Htun Htun’s neck. Half of his neck was gone and blood was spattering over me.

Wirathu: Oh Pha-yar, Pha-yar, (Lord Buddha)!
Htway: Only then I knew they meant to kill us both. So I jumped off the bike and struggled with the Kalars around me and minutes later I found myself free and running. When I met Burmese crowd at 35th street I immediately came back together with them.

Wirathu: Really, so you guys got back there quick?
Htway: Within five minutes we were there, but the Kalars were gone. Our motorbike and other stuff too.

Wirathu: Kalars stole your motorbike too.
Htway: Yes they did. Motherfuckers were all on foot and saw the cycle lying and took it away too. Motherfucking Kalars (Bengali-Muslims). 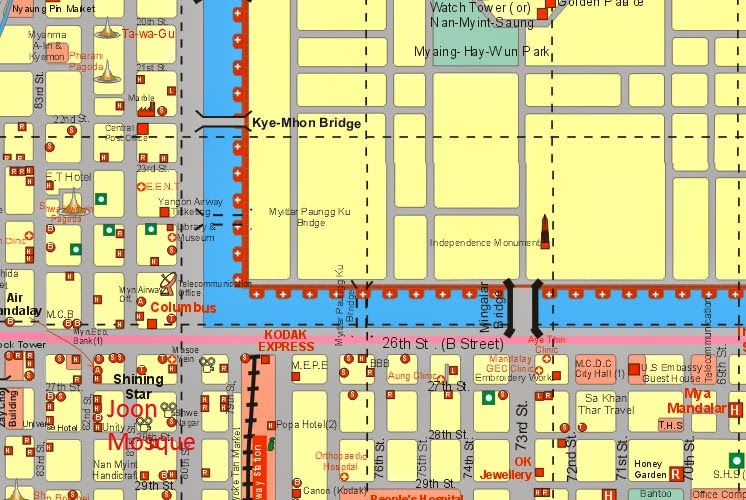