Anti-Muslim race riot is going on since 8 pm last night of July-1 in Mandalay City after the disturbing news of two notorious Muslim brothers widely known as the Mandalay-Mafia kidnapping and violently raping a Burmese-Buddhist girl who works for them broke out on June-30.

The wealthy Bengali-Muslim brothers who own a string of teashops and restaurants in Mandalay City as a cover for their illicit drug trafficking operations are Ne Win and San Maung. After the disturbing news of their violent rape of a young Burmes-Buddhist girl breaking out yesterday more than a thousand Buddhist crowd led by monks gathered at their flagship teashop Sun-Café at the intersection of 82nd Street and 28th Street and demanded justice.

Meanwhile a large group of Mandalay Muslims worrying about the severe impact on their businesses and their lives were already gathering at the Sun-Café to demand the Muslim-Mafia brothers behave or they themselves would kill their fellow Muslims. Situation was so explosive a whole battalion of Burma-Security-Police has taken a position between two large crowds.


The Rape That Started Anti-Muslim Race Riots in Mandalay

It happened in the late night of June-28. The young victim Soe Soe works for the Muslim-Mafia brothers San Maung and Ne Win at their Sun-Café as a cook-cum-kitchenhand and at the shop-closing time at about 10 pm in June-28 two brothers took her forcefully in their white luxury sedan.

They then drove towards Nay Pyi Daw where they have a couple of tea shops. On the way to Nay Pyi Daw from Mandalay at about 1 am in the early morning of June-29 they stopped the car at roadside in the Yout-thwar-inn Ward of Pyinmanar. She was sitting at the back seat and two brothers were at front seat.

Later Soe Soe the rape victim alleged that Muslim San Maung came to rear seat and violently raped her once. He then went back to front and Muslim Ne Win the younger brother came and raped her once more.

They then drove on and at the traffic point at nearby Myin-yadanar Ward in Pyinmanar they pushed Soe Soe out off the car and then drove away. The cops found Soe Soe there and took her to the Pyinmanar Hospital and then started searching for two Muslim brother rapists who were now hiding in their home-base Mandalay City.
Riots Started By Rival Muslim Groups In Mandalay

Today June-1 at about 8 pm nearly 500 Bengali-Muslims gathered at 27th Street and 82nd Street near Sun-Café and started quarrelling each other and later the public fighting escalated. A small squad of Security-Police tried to quell the Muslim crows without success as Muslim crowd was getting larger and larger.

Soon Muslims were attacking the Security-Police as more and more Security-Police (Lone-Htain) had arrived and taken positions along 26th, 27th, and 28th streets. The policemen also cut the power to the residential wards in the area.

By then the angry crowd of Burmese-Buddhists had entered the area from 26th Street and confronted the Muslim crowds. Large line of Security-Police had already blocked the 26th and 82nd streets and positioned themselves as separation-barrier between Muslims and Buddhist crowds. 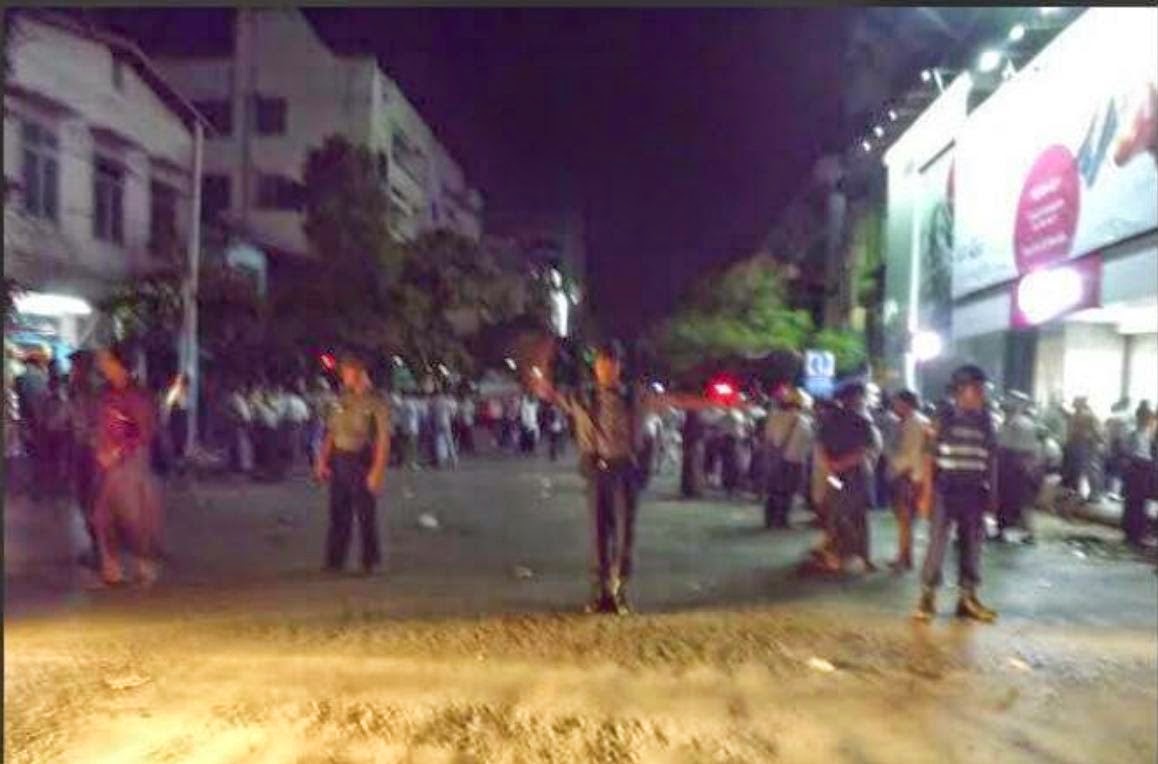 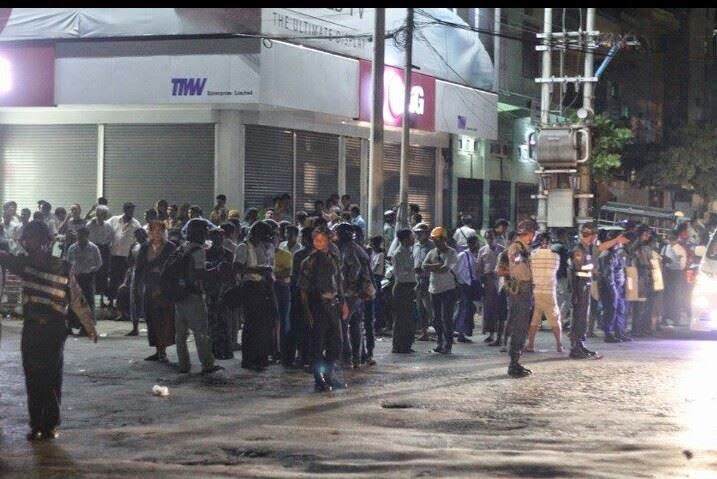 Bloody Riots Escalated As The Army Is Called In

People from both sides are now throwing stones and objects to each other over and across the police line despite the police firing multiple warning shots into the air. Two Buddhist were reportedly killed by Muslim sword while a few policemen were also badly injured.

Angry Buddhists then started destroying the Muslim shops and houses on nearby 76th Street while a large Muslim crowd from Tho-Chaung Muslim Ward were believed to be coming towards the now riots-torn inner-city area.

As the dangerous situation is now quickly becoming totally out-of-control in Burma’s second largest city army battalions has been called in to quell the rioting crowds both Burmese-Buddhists and Bengali-Muslims.

Last night (July-1) there were rumors spreading like wildfire all over the town of 969-Monks’ pan to shut down and destroy two Muslim brothers’ Sun-Café. But Ma-Ba-Tha (969) monks later publicly denied the accusations.

So the concerned Mandalay-Divisional-Police posted several Security-Police details at the area since about 4 pm yesterday. At about 6 pm both Muslim and Buddhist crowds began to appear in large numbers at the area around Sun-Café and as a precautionary measure Security-Police shut down all the shops in the area.

At about 7 pm the crowds became really large and the Divisional-Chief-of-Police arrived at the scene together with several reserve companies of divisional Security-Police. They then blocked the roads in and out of the area at the intersection of 28th Street and 82nd Street and cut the electricity supply.

But at about midnight both Muslim and Buddhist crowds reappeared at the scene this time armed with swords and spears and other weapons. So Security-Police established a separation-barrier line between two warring crowds.

By 1 am of July-2 nearly every policemen in Mandalay was at the scene and also the Sixteenth-Security-Police-Battalion from Sagaing was brought in as reinforcement. Once two opposing crowds began attacking each other police fired more than 20 rounds into air as warning shots.

Finally at about 3 am nearly 1,400 armed-policemen of three Security-Police battalions (4th, 14th, and 16th battalions) managed to quell the crowd and brought the dangerous situation under control again. Right now on July-2 the overall situation in Mandalay is uneasily calm and almost back to peaceful normal. 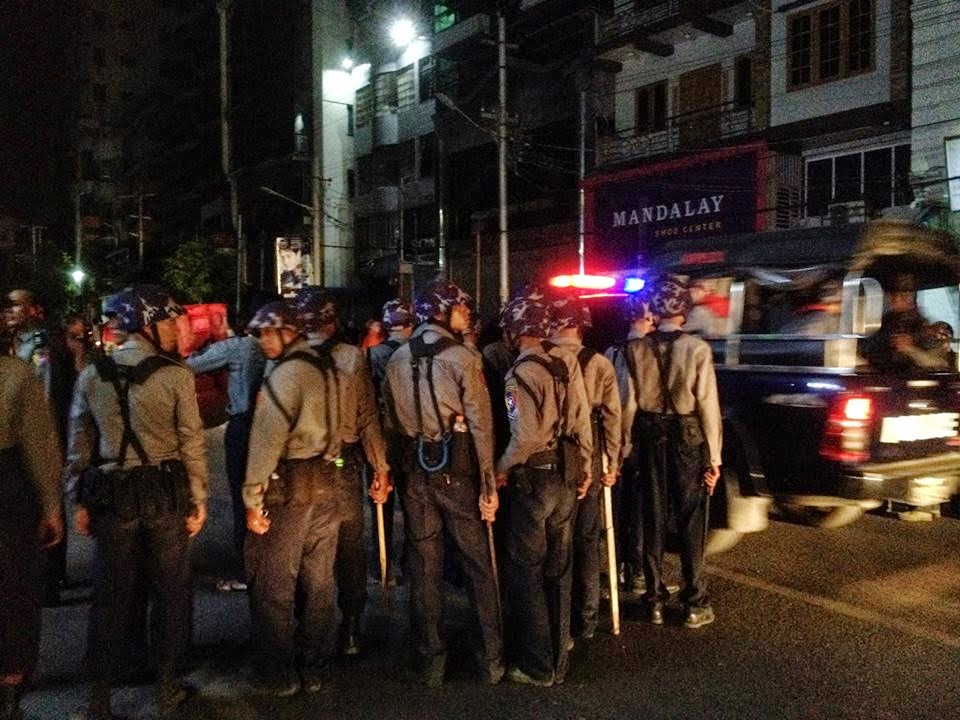 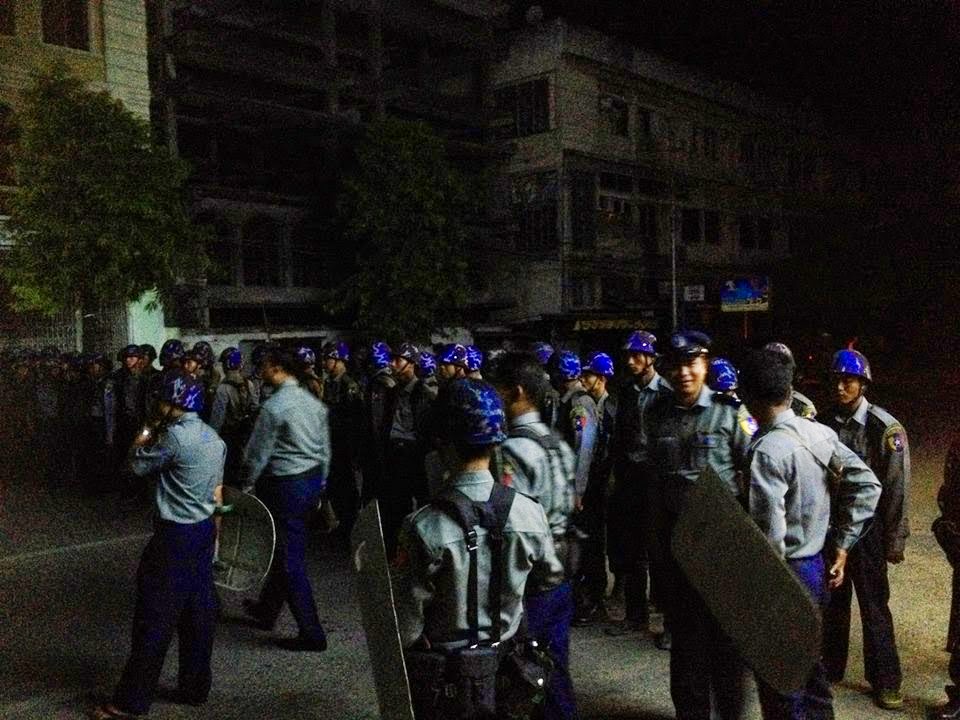 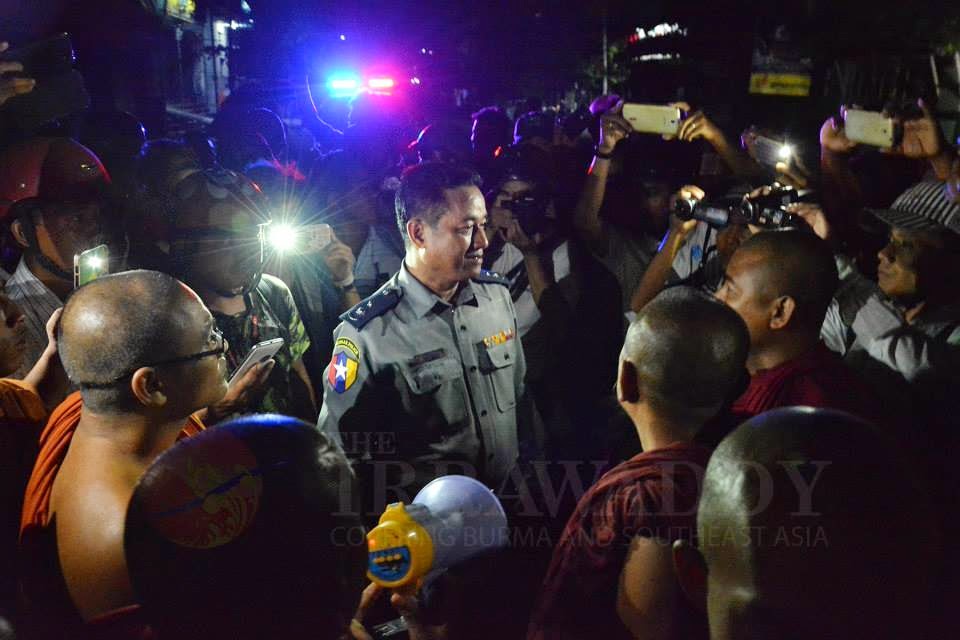 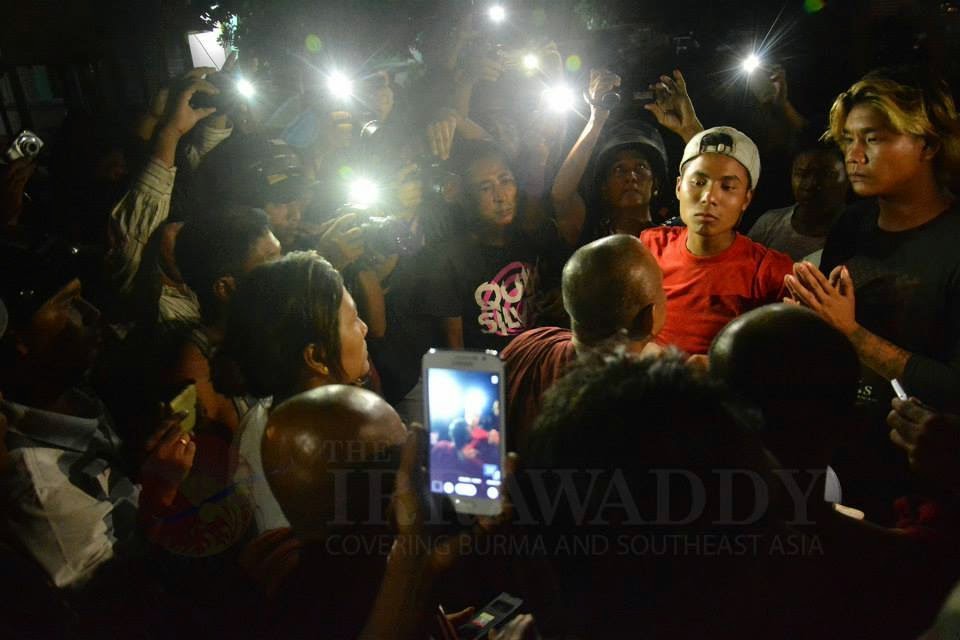 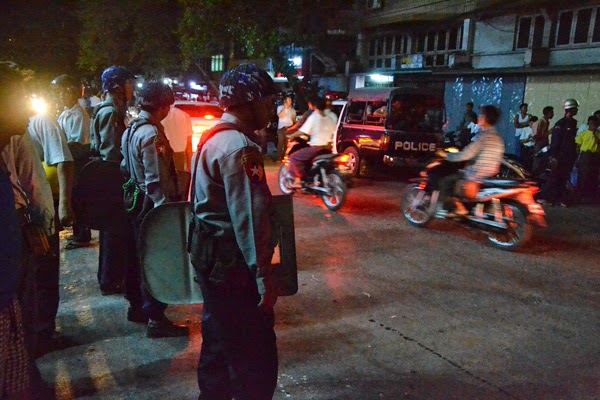 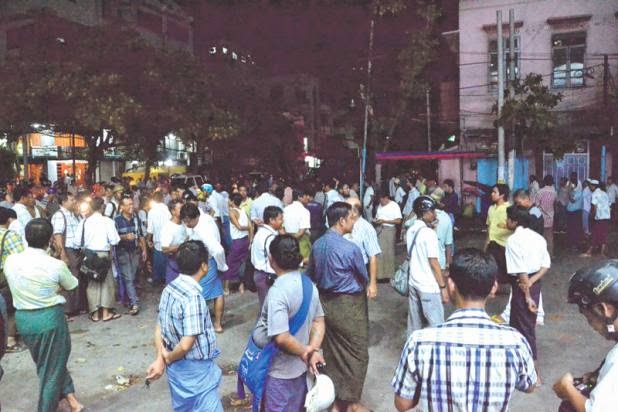 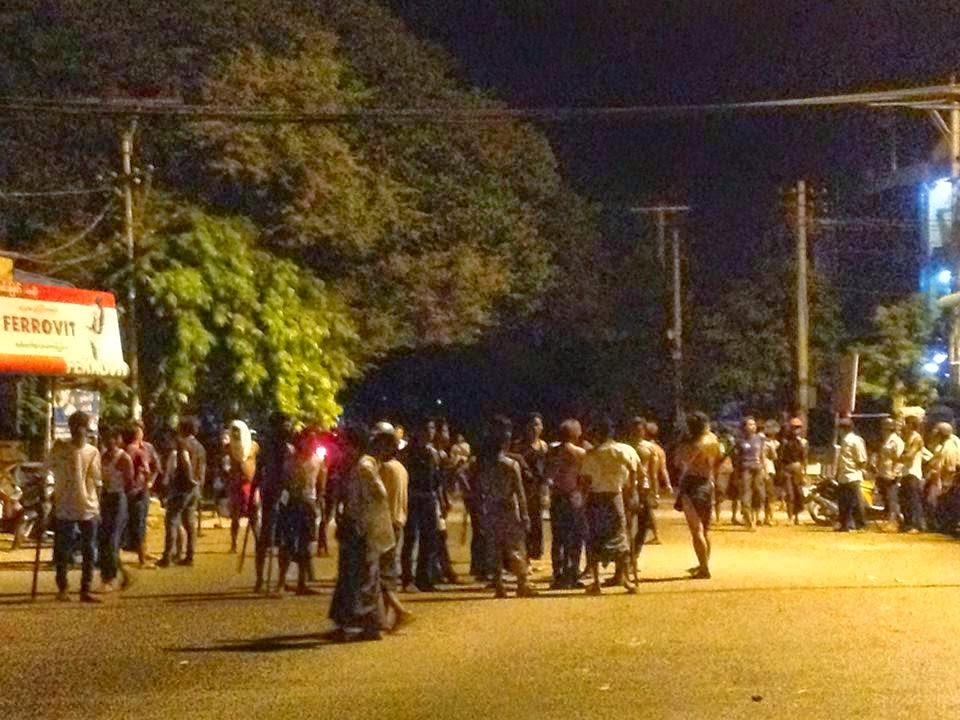