Electricity Supply Crisis In Burma By U Tin Latt (EPC)

Even though I’m a senior engineer from the EPC (Electric Power Corporation) I am not an official spokesperson of EPC. So this post is just to provide general public with basic information on present situation of electricity supply and demand in our country.

Obviously the city consuming most electricity in our country is Rangoon with about 600 MW annually. Second city in the rank of power consumption is Mandalay with nearly 120 MW last year. Behind Mandalay are Naypyidaw at third position with 50 MW, Taung Gyi at fourth with 25 MW, and Mon Ywar with 15 MW at fifth position.

Household wise, even in Rangoon, only two out of three households are electricity connected, that is only 66 percent. Kayar State currently stands at second position with about thirty-five percent of total households connected to main electricity grid, thanks to their close proximity to Lawpita Hydro-Generators at Bilu-chaung. Naypyidaw and Mandalay stand at third and fourth with thirty-four and thirty-three percent respectively.


Irrawaddy Delta Is The Worst Electricity Wise In Burma

Out of fourteen states and division of our country the most populous and the most productive division the Irrwaddy Delta has the lowest electricity connectivity with only ten percent of its households connected to main electricity grid. Maybe something to do with having too many rivers and streams and creeks to build power grid.

Even the poorest Chin State is better connected electrically than Irrawaddy Division. Shan State is at the fourth position among fourteen states and divisions with thirty percent of all her households connected to the main grid. The best place in Burma electricity wise is Ywar Ngan town near Kyauk Sel because of Kin Dar Dam Hydo-electric Generators there. Ywar Ngan never loses power even when the whole Burma goes dark.

More Than 70% Of Electricity Generated In Burma Is Hydro

Only twenty percent of electricity generated comes from gas-turbine-generators running on natural gas while nearly nine percent is from diesel-engine-generators and coal-fired plants. Relying mostly on hydro-electric power has huge disadvantage as those generators are in faraway remote jungles.

For example our business capital Rangoon has no hydro-electric-generator in her near environ. Compared to Rangoon our second largest city Mandalay has a huge advantage as Ye Ywar Hydro-Electric-Generator is only about forty miles from Mandalay and its annual production capacity is five times more than Mandalay consumes last year. 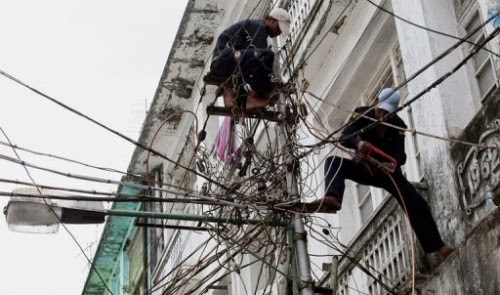 All gas-turbine-generators built recently near Rangoon can produce only about 300 MW annually and Rangoon consumes more than 600 MW last year alone and rising. One piece of good news recently was that a South-Korean company is negotiating with Rangoon Division Government to build a 500 MW capacity Natural-gas-fired steam-turbine generator at Dala across the river from Rangoon. Another Coal-fired generator is also believed to be building soon at Htan-Da-Bin near Rangoon.

But we shouldn’t be relaxing now as Rangoon’s power consumption will soon outgrow all the future excess generating capacity as the overall economy of our nation will grow. Our Rangoon has more than six million people consuming meagre 600 MW of electricity last year while Singapore has only four million but consumes 11,000 MW a year.

If our national economy grows as experts all over the world has forecasted Rangoon’s power consumption could suddenly grow three times within few short years and we need to prepare for that possible scenario. We must and should have a plan to generate at least 10,000 MW for Rangoon alone within next ten or even five years.

Mandalay Is The Luckiest Electricity Wise In Burma

Yel-Ywar Hydro-Electric-Generator near Mandalay produces 790 MW nearly seven times more than 120 MW Mandalay consumes last year. Then another hydro-electric-generator Shwe-Li (No-1) was built near Muse not that far from Mandalay at all. To send power from all those hydro-electric-generators to Lower Burma the transmission lines have to go through Mandalay Division too.

Then other small-scale hydro-electric-generators like Se-daw-gyi and Kin-dar dams are in Mandalay Division too. But Mandalay will never become an international city like Rangoon currently is and will be forever since Mandalay has no sea-port.

Even if massive foreign investment will pour into Burma in near future Mandalay would not attract them like Rangoon or even smaller Tavoy and Kyauk Phyu with major sea ports. So in my opinion Mandalay is sufficient enough electricity wise for a very foreseeable future at least ten years. 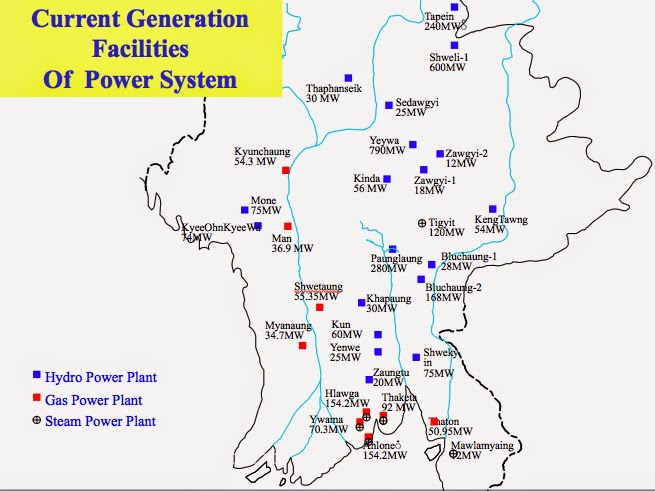 Why Are We Having So Many Power Outages

Why do we have so many power outages? The answer is simple. We do not have enough power supply or electricity. As I said before all hydro-electric-generators are in the jungles of thinly-populated upper Burma, but most our population live in Lower Burma and electricity generated is transmitted over very long lines.

There lies the main problem as most generators are located very far away from the main population centre like Rangoon and Irrawaddy divisions. Rangoon consumes forty-five percent of all electricity generated and Mandalay uses ten percent and Naypyidaw just four percent.

The main power transmission line to Rangoon from Upper Burma starts at Shwe-Li Dam’s generators and follows the route Shweli-Mansan-Shwezaryan(Mandalay)-Bellin-Thabyaywa(Meikhtilar)-Tharzi-Pyinmanar-Taungoo-Kamarnat(Pegu) and finally reaches the distribution transformers near Rangoon.

The main weakness of our electricity grid is that we do not have a single centralised control over the whole grid and when something seriously disruptive like insurgent-strikes occurred in the jungles we at EPC basically lose the plot trying to put the grid back on.

When bloody KIA Kachins blew up Lawpita-Taungoo and Shweli-Mansan lines last year with strategic intentions we just ran around like headless chooks trying to fix the grid as fast as we could as all the power generated at Lawpita generators didn’t know which way to go to get to Rangoon at more than 500 miles down south.

Our grid is now so complex and so ad-hoc it is even hard to explain, but one thing definitely so certain is that Rangoon will lose power whenever bloody KIA Kachins blow up that two lines Lawpita-Taungoo and Shweli-Mansan in the jungles under their tight control.
How To Fix Our Electricity Problems

To get constant and reliable power 24/7 we must build more generators and we must reduce our near-total reliance on hydro-electric generators. Not just new generators we must redesign and rebuild our main transmission grid. No points in producing more electricity if we do not have proper infrastructure to transmit all the generated-electricity reliably and efficiently throughout the nation.