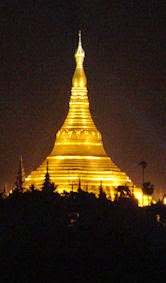 Myanmar, land of pagodas that shares many similarities with India, is putting its past behind to catch up with modern world.

“Try to be happy. Happiness is important. Even birds and trees should be happy. Do not rush to do many things in the time that you are here for this conference. Then you will enjoy your visit,” advises Michael Chin, chairman of Chin Corp of Myanmar.

I am stunned. Most business leaders focus on enhancing productivity and multi-tasking in short bursts of time to boost sales and profits.

Here is an executive who is counseling his employees and the delegates at an international management conference to focus on being happy. I am flummoxed. True, happy employees produce great results. Yet, no business school or management expert teaches the importance of the happiness of employees or how to measure it.


Myanmar is full of such rich peculiarities. The country laments the wastage of the last 50 years of military rule that left it trailing dynamic South-east cousins like Thailand, Malaysia and Taiwan. Now, under a more liberal government that is dismembering age-old shackles to boost the economy, the Myanmarese are raring to catch up with the modern world.

“We are Buddhists, we are not bitter about the past. We move on,” says Yan Yan, a young shopkeeper selling jade Buddhas in the Bogyoke Aung San Market in Rangoon, now called Yangon. This traditional market has hundreds of shops selling textiles, silverware, lacquer, and handicrafts.

“Industry came late to our country, so we Myanmarese became good with our fingers and hands,” says Mama Piy who owns a shop selling lions carved from the famed Burmese teak wood. Mama Piy, like many Myanmarese, is a gentle, self-effacing and shy person, though she is an astute businesswoman.

Myanmarese girls pour tumblers of water on the statues of Buddha in various corners of the famed Shwedagon Pagoda in Rangoon. In the last few years, US President Barack Obama and former Secretary of State Hillary Clinton also visited the pagoda and poured water over the shoulders of Buddha to seek his blessings.

This golden domed Buddhist pagoda is 2,600 years old and is an exclusive gem of Myanmar. There are innumerable Buddhist temples and shrines within this vast pagoda. Visitors are humbled by the faith of the devotees and the fervency of their prayers. You enter as a tourist, you exit as a devotee.

It is the Buddhist spirit of tolerance and forgiveness that has over the decades enabled the Myanmarese to assimilate several nationalities and races into their fold, even when their economy was struggling. Over the centuries, Indians, Chinese, Bangladeshis, Hindus, Muslims and Christians have made Myanmar their home. Buddhist pagodas, Muslim mosques, Hindu temples, Christian churches co-exist in the vicinity of one another.

The pride of every Myanmarese is the new, shining capital — Nay Pyi Taw. Built on raw forest land in a record 14 years, this is a vast, stunning, modern town. It is a testimony to what the Myanmarese can achieve, given the will and desire. It is a meticulously planned town, with spaces earmarked for government buildings, residential areas, shopping locations and world-class hotels.

Grand hotels and buildings built from steel, glass and chrome dot the skyline. The roads are wide with eight to 10 lanes, so traffic runs seamlessly. “We are building the infrastructure for the next 100 years here,” says a university professor. Colourful fountains light up the roads every night. A 320-km concrete highway connects Yangon with the capital. Green paddy fields cover the long highway on either side.

The Myanmarese are fanatical about cleanliness. The pagodas as well as most streets and highways are spotlessly clean. Herein, they differ from India, which is on the way to becoming one of the dirtiest countries in the world. Hence, the Myanmarese team leader of a syndicate on developing Yangon, in which I participated, opined, “We consider Dubai and Brasilia as models, but not Mumbai or Bangalore.” I agreed. India is letting its cities degenerate into slums.

Seated at a round-table at dinner, with a dozen delegates from Thailand and Korea, I remark they must be enjoying Myanmarese cuisine. In response, I get blank looks. Later a Myanmarese professor explains to me, “We use a lot of masalas in our food, like you Indians. The Thais and Koreans do not relish our strong masalas.”

It is not merely spices that bond India and Myanmar. Most Myanmarese greet strangers with the traditional Indian “namaste” with folded palms. I also find paan (betelnut) shops in many crowded markets in the cities and even in the villages.

The Myanmarese also wear the “lungi”, now transformed into a global icon by Shah Rukh Khan after his “lungi-dance” song. However, the Myanmarese wear colourful “longyis”, woven into a cylindrical form, held by a tight knot at the stomach. For formal occasions, it is woven from silk. “It does not fall off or slip down; the knot has to be tight,” demonstrates Chin.

A short distance from the thick green foliage and giant banyan trees of the Shwedagon Pagoda is the grave of the last Mughal emperor of India, Bahadur Shah Zafar, who was banished for his role in the 1857 mutiny. He was exiled to Burma (as it was called then) in 1858, where he died in 1862. 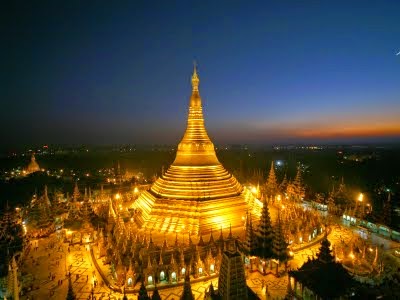 In his last days, he wrote a poem of heart-rending longing, which Indians, like my father, remember by heart: “Kitnâ hé bad-naseeb Zafar; dafn ke liye, do gaz zamîn bhî na milî kû-e-yâr méñ ( How unfortunate is Zafar! For his burial, not even two yards of land were to be had in the land of his beloved).”

Coincidentally, the last emperor of Burma was exiled by the British to India in 1885. Emperor Thibaw Min, his wife Supayalat and their children lived in Ratnagiri in Maharashtra, where he died in 1916.

Later, Indian freedom fighter Bal Gangadhar Tilak was imprisoned at Mandalay Fort for sedition by the British. Released in 1914, he had told the court, “There are higher powers that rule the destinies of men and nations and it may be the cause I represent may be benefited more by my suffering than my freedom”.

Myanmarese leader Aung San Suu Kyi, the world’s most prominent political prisoner who spent 15 years under house arrest, is now a free citizen. She was the tormented face of Myanmar for the last two decades. Now, she may contest for the president’s job in 2015. It will be a tough match. The current president, Thein Sein, is delivering growth and jobs.

As my taxi speeds to the airport, I crane my neck for a long look at the golden dome of the Shwedagon Pagoda in the azure sky. And I think: here is a neighbour which is so close to India in culture, history, greetings, spices, handicrafts and even “lungis”, yet we know so little about the rapid strides this country is making to leap into the brave, new world.


(Rajendra K Aneja has worked for Unilever in Asia, Latin America and Africa. A Sir Dorabji Tata Scholar, he has authored the book Agenda for a New India.) 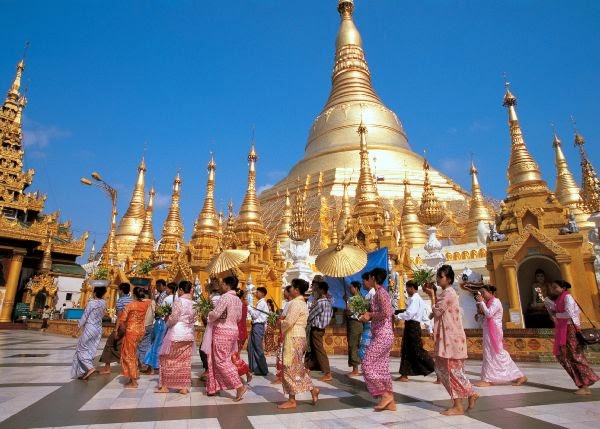