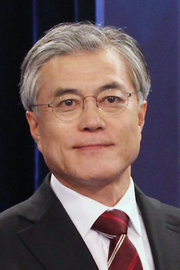 South Korea elected a left-leaning president for the first time in a decade on Tuesday, in a landslide that could lead to peace talks with the pariah North Korean regime and a potential clash with America.

The election of Moon Jae-in, 64, a former human rights lawyer and leader of the liberal Democratic Party, will radically change the political landscape of Asia’s fourth largest economy just two months after the impeachment of conservative President Park Geun-hye on corruption charges.

“I will be a president for all the people” Mr Moon told his celebrating supporters at midnight in the capital, Seoul, ahead of the official results. Early exit polls showed him with a 41.4% lead and he is expected to be sworn-in today [Wednesday].

Over 77% of South Korea’s 42.4 million eligible voters cast their ballots, eager to fill a power vacuum that had left Seoul directionless during an escalating standoff in recent weeks between Pyongyang and Washington. With South Korea on the frontline of any future military conflict, Mr Moon will immediately face domestic pressure to ease those tensions.


The son of North Korean refugees, the president-elect (and a North Korean Appeaser) has been clear about his ambition to pursue negotiations with the mad dictator Kim Jong-un, in a bid to persuade him to give up his nuclear weapon ambitions and bring lasting peace to the Korean peninsula.

His election will likely be welcomed by Pyongyang, which on Monday called for “a new era of unification”, urging the South to vote against conservatives, who were the “manic followers of confrontation.”

However, Mr Moon faces a possible early conflict with the US, his strongest strategic ally, over the controversial early deployment of THAAD, an American missile defence system, on a golf course in the south of the country during the election campaign.

Mr Moon expressed his regret at the move, urging the US to delay until a new president was elected. China has imposed unofficial economic sanctions on Seoul in protest, and South Koreans are bitterly divided.

According to early exit polls, over 20% of voters pushed Hong Joon-pyo, from Ms Park’s conservative Liberal Korea Party, and a strong advocate of THAAD, into a surprise second place, beating Ahn Cheol-soo, a former computer tycoon with the centre-left People’s Party into third.

The new leader must also address a sluggish economy, high youth unemployment, and deep public disillusionment with political and business elites over a corruption scandal that will force former President Park to face a criminal trial later this month.

“When [people] actually vote it’s going to be more about youth unemployment and economic issues,” said Katherine Moon, a Korea analyst at the Washington-based Brookings Institution, ahead of the poll.

After voting, Park Hye-soo, a 20-year-old student agreed. “There are a great number of students in Korea who cannot attend university because the tuition is so high. I voted for the candidate I believe is most considerate to the needs of ordinary people,” she said. 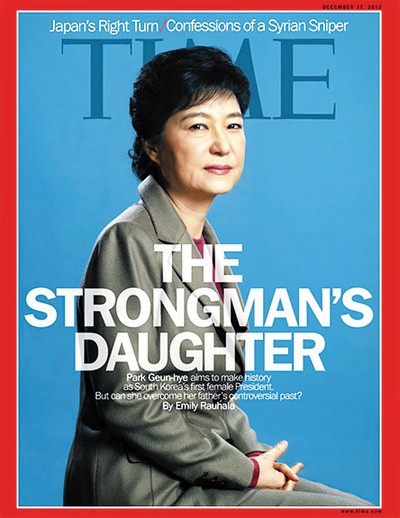 (December 20, 2012 -- On the night of December 19, the whole nation was waiting for the final result of the presidential election; at midnight Park Geun-hye was declared winner, with 15.75 million votes or 51.5%. Her opponent from the main opposition United Democratic Party (UDP), Moon Jae-in, won 14.67 million votes or 48.80%.

Park Geun-hye is daughter of former military dictator Park Chung-hee (1961-1979) and was the candidate of the ruling Sae-nu-ri party (Sae-nu-ri means a new world). She narrowly led the polls throughout the campaign.

Believe it or not, the so-called dictator General Park Chung-hee (1917-1979) industrialized war-ravaged South Korea and lifted his people out of abject poverty. He reportedly sacrificed thousands and thousands of his young soldiers on the side of US in Vietnam War so that South Korean companies had unhindered access to US market dutyfree back then and the astonishing result is being seen today all over the world in the form of Hyundai cars and Samsung TVs and LG Smartphones and other countless products of South Korean Industry.

Moon’s party and the many people who remember the tyranny of Park’s regime had expected Park’s defeat. Especially since another dark horse candidate, Ahn Cheol-soo, supported Moon against Park in the final days of the campaign.

Ahn was quite popular among people for his clean image and as a successful entrepreneur of his anti-virus programming firm, but he gave up his candidacy for Moon just before the formal registration for presidency. The gap was narrow -- 1.08 million votes or 3.6% -- but it was bigger than had been expected.)

South Korea goes to the polls on 9 May to elect a new president in the wake of the impeachment of Park Geun-hye. The saga surrounding Park’s fall from grace has built expectations for reforms to strengthen democratic institutions and stamp out corruption, as the vote takes place against the backdrop of concerns about tensions with North Korea.

The beginning of the end for Park came late last year with the bombshell revelations of the Choi Soon-sil scandal. Choi, a long-time family friend of Park, had exercised influence over presidential decision-making despite holding no official government position.

She had also used her connection to the president to attract vast ‘donations’ from several of South Korea’s chaebol (family controlled business conglomerates) — including Samsung, Hyundai Motors and Lotte — in exchange for policy favours. Public anger boiled over, triggering millions to join the candlelight protest movement demanding Park’s resignation.

The South Korean National Assembly voted overwhelmingly in December 2016 to impeach Park, including many lawmakers from her own party. And South Korea’s Constitutional Court unanimously upheld the decision in March 2017.

Park was promptly arrested, awaits trial in jail on 18 criminal charges — including abuse of power, leaking state secrets and receiving or demanding US$52 million in bribes — and if convicted faces between 10 years to life in prison. Choi, Samsung CEO Lee Jae-yong and Lotte Group chairman Shin Dong-bin among others have also been indicted.

These events have upended the South Korean political landscape. As Kim Kee-seok explains, ‘in the aftermath of Park’s impeachment, for the first time in any South Korean presidential election there is no strong conservative candidate’.

Out of 18 presidential elections in South Korea’s modern political history (six of which were genuinely free and fair post-1987) South Koreans have only elected a (left-wing) progressive president twice and with small margins. ‘South Korea’s conservatives have had near hegemonic power, by large electoral margins in most other elections’.

South Korea’s conservatives are now in disarray. The main conservative Saenuri Party split with the anti-Park faction led by Yoo Seung-min forming the Baraeun Party (BP) and the pro-Park faction led by Hong Jun-pyo forming the Liberty Party of Korea (LPK). Barring a major upset, Moon Jae-in of the Democratic Party of Korea (DPK), polling at 44.2 per cent, looks set to be the next president of South Korea.

His nearest rival is Ahn Cheol-soo of the People’s Party (PP), polling at 18.6 per cent, who also sits on the progressive side of the ideological divide. Both the conservative candidates, Yoo and Hong, were trailing badly for most of the campaign.

Hong has made a late comeback with 13 BP lawmakers defecting to the LPK in a last ditch effort for conservatives to unite behind a single candidate. And while this saw Hong claw up to equal second with Ahn polling at 18.6 per cent, it appears to have come too late in the game. 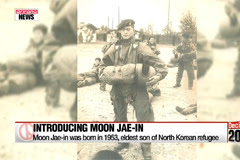 (As the likely presidential candidate of the main opposition party, the liberal Mr. Moon tops opinion surveys of potential replacements for Ms. Park. As a student activist in the 1970s, Mr. Moon was jailed for opposing the dictatorship of Ms. Park’s father, President Park Chung-hee.

He had been a friend and ally of President Roh Moo-hyun since the 1980s, when they worked together as human rights lawyers defending students and labor activists persecuted under the military dictatorship. When Mr. Roh became president, Mr. Moon became his chief of staff.

Mr. Moon ran for president in 2012, losing narrowly to Ms. Park, which his supporters say was partly because of a clandestine smear campaign by the government’s main intelligence agency.

Mr. Moon supports the country’s alliance with Washington, but he has argued that it needs a more “balanced diplomacy” with the United States and China. His party has criticized the current approach on North Korea, saying sanctions alone will not end the North’s nuclear weapons program.

Many of its members have opposed Ms. Park’s decision to deploy an American missile defense THUDD battery in South Korea. Mr. Moon has not said whether he would reverse the decision if he became president but has said it should be subject to parliamentary approval.)

South Korea’s presidential election on Tuesday is both a test and milestone in South Korea’s democratic development. The fall from grace of yet another president — the conservative Park Geun-hye — frames victory for the left and elevates constitutional reform as a national priority.

The indictment of the recently-impeached Park Geun-hye on a total of 18 charges has big implications for South Korean democracy. This year marks the 30th anniversary of the country’s 1987 democratic constitution, a constitution whose flaws are now all too obvious. Five of the past six democratically elected presidents have fallen from grace, usually over corruption charges.

Besides Park — whose corruption trial began on 2 May and who has been indicted on a total of 18 charges, including the charge of either receiving or demanding $US52.1 million in bribes — one former president Roh Tae-woo was imprisoned for mutiny and bribery.

Former presidents Kim Young-sam and Kim Dae-jung saw their sons imprisoned for receiving bribes and influence-peddling. President Roh Moo-hyun committed suicide amidst an investigation into a corruption scandal that involved his wife and children.

Yet South Korea is generally regarded as one of Asia’s most active democracies. The impeachment of Park was seen as an ‘historic milestone in the development of modern democracy across Asia’. 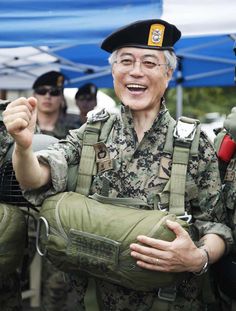 The slogan aims to counter the pro-Park conservative forces which he has labelled ‘the old evil force’. Moon claims that, ‘[t]his presidential election is the one that will complete the ‘Candlelight Revolution’, a reference to the anti-Park candlelight protests by some 1.6 million Koreans.

Ahn Cheol-soo, co-founder of the centre-left People’s Party (PP) who has been running second in the polls, vows to form a coalition government by selecting the most talented people from across the political spectrum, including the main conservative Liberty Party Korea (LPK) and the newly created rival conservative Bareun Party (BP).

With a week to go before Tuesday’s election 13 BP lawmakers joined the LPK to support Hong Joon-pyo, whose popularity ranking has jumped to second alongside Ahn. Despite this sudden development, Moon’s lead in the Realmeter poll released last Wednesday sits at 42.4 per cent, over double his two nearest rivals.

Some even proposed specific reform options such as a four-year two-term presidency, a semi-presidential system, or a cabinet system to replace the current five-year single-term presidency that dates back to the start of democracy under the 1987 constitution. None took any action.

Another reason for caution is that constitutional change needs the support of two-thirds of the National Assembly, plus a public referendum. These requirements will be tough to meet given the current national divide between the pro- and anti-Park blocs, even among conservatives.

The new government, whoever grasps victory, will struggle to build the national consensus needed across the conflict-ridden political parties and the South Korean electorate to deliver long-debated constitutional and governance reform.


If Moon wins, he will face widespread hostility from conservative, older voters, particularly in the southeast region of Youngnam — the home-base of six former presidents including Park. In their eyes, Moon is unfit to lead South Korea because he is weak on security and is accused of being pro-North or even a ‘North Korean sympathiser’. 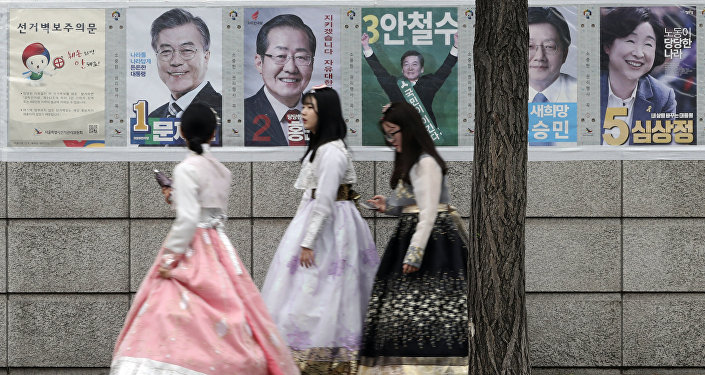