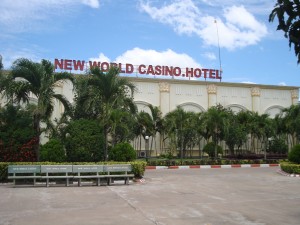 Horror Stories For Vietnamese Gamblers in Cambodia: This past week, disturbing news has emerged from the border town of Bavet in Cambodia, where four employees of the New World Casino & Hotel have been arrested.

The Khmer Times reported that local police confirmed the discovery of a body, which has been identified as 42 year old Vietnamese national. The report goes on to say that the man was discovered in his hotel room at the casino, and that the serious wounds to his throat and body left police in no doubt that he had been murdered.

After further investigations were made, the four employees were arrested. The local police force stated that the deceased had crossed over from Vietnam into Cambodia in order to gamble, and having lost his money, had taken a loan from the suspects currently in custody.


The police assert that, upon losing the loaned money too, he was unable to repay his debt, and was subsequently held hostage while ransom demands were made to his family. When the family of the man could not meet the demands, the suspects allegedly beat and tortured the man, eventually killing him.

Not an isolated incident

This story is not an isolated incident, with locals in Vietnam still unable to gamble in their homeland. This fact is fuelling the casino industry along the Cambodian border, with loan sharks having taken up residence there. Since then, frequent newspaper reports of debt collection deaths and injuries, have surfaced.

One such story was reported by VnExpress newswire four years ago, and involved an 18 year old Vietnamese resident, who borrowed VND40 million – the equivalent of $1,900, from local loan sharks.

After a losing session, and a decision to flee home when he couldn't pay, the young man then made an ill fated decision to return to Cambodia some months later. He was quickly recognised and abducted, with his mother being sent a harrowing ransom note demanding VND66 million.

No doubt the family who were of very limited means, struggled to raise the money, and soon after, a severed finger arrived with a note to say the debt had risen to VND73 million. The captors also stated that if no payment arrived, their son would be killed, and his organs harvested and sold. The family managed to borrow the money to free their son, who later told of seeing other gamblers held hostage, some of whom had lost body parts.

In another terrifying story reported in Sai Gon Tiep Thi newspaper a few years ago, a man had run up VND100 million ($4,750) in gambling debts, and had offered his 13 year old daughter as a hostage, to persuade his creditors that he would pay.

Reports indicated that the loan sharks were linked to Bay Tang Casino, and sent a letter to the girl's grandparents when the father did not return with the money. They stated that the girl would be sold to a brothel in Thailand if the debt, and interest, was not paid in full. Fortunately, the family managed to find the money in this instance, and the girl was returned safely. Her father's location remains unknown.

Vietnamese police on Tuesday rescued a 19-year-old youth who had one of his fingers chopped off and sent to his parents in order to threaten them to repay money he lost gambling in Cambodia. 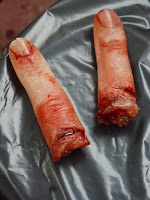 Nguyen Minh Tan, 19, was found in a locked apartment, along with Han Loi, a Cambodian man who was in charge of guarding gambling losers, in Bavet Commune, Svay Rieng Province. Vietnamese police arrested Han Loi and confiscated a knife and chopping board believed to be used to cut off the fingers of gamblers to be sent to their families for demanding ransom.

The police planned the rescue for two Vietnamese gamblers Tan and Truong Toan on July 17 after their families reported that they had received fingers of their sons in letters sent from Cambodia, demanding ransom to get their sons back. The kidnappers got wind of the fact that police were searching for the Vietnamese men and sent Toan back to Vietnam, but kept Tan in the apartment. Toan was detained in a house in Binh Phuoc Province until he escaped on July 19.

Toan and Tan told the police they were locked in a room and beaten up by three people, Han Loi, a Vietnamese woman named Hanh and her Cambodian husband named Huong after they lost money gambling in Cambodian casinos early this month.

The couple told them to call their families and asked for payment. When the families did not send the money, they ordered Han Loi to chop parts of the gamblers' fingers and send it to the families. Police are continuing to investigate the case.

The Ministry of Public Security said Sunday they were investigating claims from two Vietnamese citizens who received fingers of their sons sent from Cambodian casinos, which forced them to pay a ransom for gambling losses.

On July 14, Nguyen Van Truoc, a 43-year-old resident in the Mekong Delta province of Ben Tre, reported to the police a strange man in his 40s delivered him a letter four days earlier. The letter was written by his 19-year-old son, Nguyen Minh Tan, from a casino in Cambodia.

When Truoc opened the envelope, he was more than terrified to see another envelope, with a blood-stained letter and part of a right ring finger wrapped in it. In the letter, Tan asked for his family to pay a ransom of US$3,000 or he would lose another part of his finger. The following day, the family received two strange phone calls, asking them to pay a ransom or they would receive more of his fingers.

Tam recalled that on May 6, Tan told his family he was going to Ho Chi Minh City to work as a waiter. The following day, they learned that he lied and went to a Cambodian casino and lost $3,000 gambling. In early July, the families received several phone calls asking them to pay a ransom but they could not afford it. 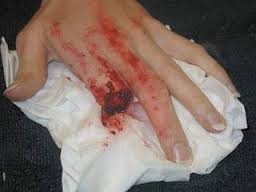 Truoc told the police it was not the first time Tan and his friends went to Cambodia for gambling. In March, Tan lost $3,000 in a casino and was detained in Cambodia until Truoc managed to borrow the money from relatives and friends to rescue his son. A month later, Tan followed his three neighbors to Cambodia and lost another $3,000. This time, Truoc had to sell his land plot to pay the gambling losses.

In another case, Bui Thi Tuyet Nhung, a 52-year-old woman in HCMC's District 10, on July 9 received a letter delivered by a strange man in his 60s. She found part of a finger wrapped in a plastic pack and a letter with the handwriting of her 26-year-old son, Truong Toan. Toan wrote in the letter he was being beaten in Cambodia after losing $2,000 in gambling.

"If our family does not pay the ransom in the next three days, I will be killed," Toan wrote. Toan, a former officer of MHB Securities Joint Stock Company, started gambling in September 2007, according to Nhung. He stole his family's money and gold, and borrowed money from his colleagues to gamble. In Cambodia, Toan lost it all.

In November 2009, he lost $2,000 and Nhung paid the ransom for his freedom. In September 2010, he lost an additional $1,300 and was released after Nhung paid the ransom. On June 12, Toan phoned home saying he lost $2,000, but this time Nhung told him she did not have any money left. She asked an acquaintance to lend money but he said that Toan had borrowed from him several times without paying the money back.

On July 15, Social Order Crimes' Investigation Police Department under the Ministry of Public Security said they were investigating 20 gangs, with more than 330 members, for serving as intermediaries and loan sharks and detaining gambling losers for ransom in Cambodian casinos.
These casinos border Vietnamese provinces of Binh Phuoc, Tay Ninh, Long An, An Giang and Kien Giang. The police are calling for victims of these crimes to report them to local authorities.

Vietnamese border guards are investigating a case in which a Vietnamese gambler is suspected of killing himself by jumping out of a window at a Cambodian casino where he was kept by his lenders , Lao Dong newspaper reported.

The man, who introduced himself as a gambler who had just escaped from the casino, had many bruises on his body, Hanh said. Speaking on condition of anonymity, the man said he came to the casino on August 2 and lost all of his money there.

He mortgaged his own life for US$1,000 to gamble but he lost once again. The man was later detained in a room inside the casino, waiting for his family to pay ransom for him to be released. He said six other Vietnamese four men and two women were detained in the same room.

The gamblers were frequently beaten up, with Do Thanh Cong, a 34-year-old man from Long An Province, suffering the most because he had been detained for the longest and his family had yet to pay the ransom, according to the man. "Cong was beaten up several times a day, until he discharged blood from his mouth," the man said.

On the afternoon of August 9, after being severely beaten, Cong and another man named T. (from Vinh Long Province) resisted and broke a glass window with a chair to jump out of the room. Cong fell off the ground and died on the spot, while T. had his arms and legs broken, according to the man. Three days later, while being "escorted" to have lunch, the man ran away. He managed to get back to Vietnam and visited Cong's house to inform his family of his death. 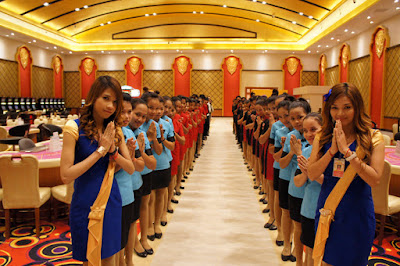 According to Colonel Hanh, the Long An Province Border Guard Department had contacted Svay Rieng province authorities, but they denied the death had occurred. They said there was a Vietnamese gambler who jumped off an apartment at Casino Sato (not Las Vegas as claimed by the Vietnamese gambler) on August 7, but he was not dead.

They said the gambler named T. from Vietnam's Vinh Long Province had his arms and legs broken, according to Colonel Hanh. They added that Cambodian casinos are under the authority of the central government, not provincial authorities, Colonel Hanh said. "We will verify this case to bring Cong's body back home, if he is actually dead. Vietnamese loan sharks in Cambodian casinos may be involved."

On Monday, Lao Dong reporters visited Cong's house. His wife, Bui Thi Huong, said Cong was a xe om driver and occasionally went to Cambodia casinos for gambling. On July 20, he came to a casino and called home three days later, asking Huong to bring $2,000 to the casino in exchange for his freedom.

Huong could not afford the ransom. On August 9, a strange man called her and said her husband would end up dead if she didn't pay the ransom. Huong collected enough money but when she called back she could not reach her husband and the man.


Huong and Cong had five children, with the oldest being 12 years old. "Since casinos opened near the Moc Bai border gate, my husband used all his money in gambling. He ignored all my advice," she said in tears.