(Breaking news article direct from The BANGKOK POST on 24 May 2017.) 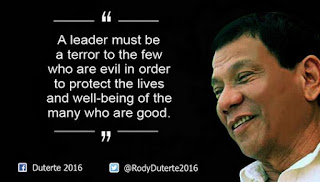 The following is apparently the full transcript of the phone call initiated April 29 by US President Donald Trump to Philippine President Rodrigo Duterte. The transcript, from a document classified 'Confidential' was first obtained by the website The Inercept.

The transcript below is directly from the Confidential document, including typos, short forms, etc. Note: POTUS is "president of the United States". PRRD is "Philippines Republic [President] Rodrigo Duterte"

POTUS: Okay I hope its not too late? Its okay isn't it? Is it too late?
PRRD: No its okay we are just having dinner with some members of ASEAN.

POTUS: Oh ok good, because (I) know you don't sleep much, you're just like me. You are not a person who goes to bed at all. I know that, right?
PRRD: Yes. You are right Mr President

POTUS: I just wanted to congratulate you because I am hearing of the unbelievable job on the drug problem. Many countries have the problem, we have a problem, but what a great job you are doing and I just wanted to call and tell you that.
PRRD: Thank you Mr President. This is the scourge Of my nation now and I have to do something to preserve the Filipino nation.

POTUS: so how is everyone doing, how is the Phls doing?
PRRD: We are doing fine Mr president but in the ASEAN summit every member state was really nervous about situation in Korean peninsula but we would like to tell you that we support you and keep on the pressure because as long as those rockets and warheads are in the hands of Kim Jon Un we will never safe as there's not telling what will happen next

POTUS: Whats your opinion of him, Rodrigo? Are dealing with someone who stable or not stable?
PRRD: He is not stable, Mr president, as he keeps on smiling when he explodes a rocket. He even has gone against China which is the last country he should rebuke. But it seems from his face he is laughing always and theres as dangerous toy in his hands which could create so much agony and suffering for all mankind 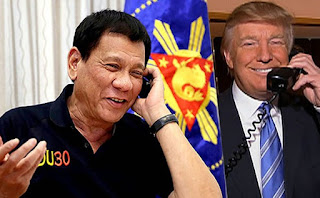 POTUS: Well, he has got the powder but he doesn't have the delivery system. All his rockets are crashing. That's the good news. But eventually when he ges that delivery system ... What do you think about China? Does China have power over him?
PRRD: Yes at the end of the day, the last card, the ace has to be With China. Its only China. He is playing with his bombs. his toys and from the looks of it, his mind is not working well and he might just go crazy one moment. China should make a last ditch effort to him tell to lay off. China will play a very important role there.

POTUS: We have a lot of firepower over there. We have two submarines - the best in the world - we have two nuclear submarines - not that we want to use them at all. I've never seen anything like they are but we don't have to use this but he could be crazy so we will see what happens.
PRRD: Every generation has a mad man - in our generation is Kim Jung Un- you are dealing with a very delicate problem

POTUS: we can handle it
PRRD: but you can keep the pressure on him.

POTUS: I hope China solves the problem. They really have the means because a great degree of their stuff come through China. They are doing certain things, like not accepting calls. But if China doesn't do it, we will do it
PRRD: I will try to make a call to President Xi Jinping and I will try to tell him that if we will remain to be peaceful, China has the card. The other option is a nuclear blast which is not good for everybody.

POTUS: You can tell him I am counting on him. I have a very good relationship with him. I had him in Florida for two days and got to know him well. He is a good guy.
PRRD: I will do that. I will call his Ambassador here and will make an appointment to call him. It will be good if you can keep on the pressure on Kim but actually we are all worried as we are all are within the striking distance of his rockets. We are all afraid

POTUS: We can't let a madman with nuclear weapons let on the loose like that. We have a lot of firepower, more than he has, times 20 but we don't want to use it. You will be in good shape
PRRD: We believe it, we know it all along. I will try to make a call tmrw to China

POTUS: Pls call China and tell them we are all counting on China. Tell the President - we became friends for two days - he was great. On another subject, I am coming to see you I guess sometime
PRRD: November hopefully, we will be happy to see you

POTUS: Thank you Mr President. You are a good man. Yes, certainly in November Welcome and thank you and we will be happy to see you, Rodrigo. I look forward to seeing you. If you want to come to the Oval office, I will love to have you in Oval Office. Anytime you want to come. I will be in the Phls in Nov, but anytime if you are in DC or anywhere, come see me in the Oval office. Work it out with your staff. Seriously, if you want to come over, just let us know. Just take care of yourself, and we will take care of North Korea. Keep up good work, you are doing an amazing job. Say hello to people of the Philippines for me.
PRRD: They know that you are calling. It is the last day of the ASEAN Summit and everyone was asking. Sultan Bolkiah just left but I will tell remaining guys here what you told me. We are all for peace, there's no secret about that.

POTUS: Good, you take care of yourself, come see me before November, you are invited anytime.
PRRD: I will do that Mr President. Thank you for the concern. God bless you Mr President.

POTUS: Take care of yourself, Rodrigo. God bless you. 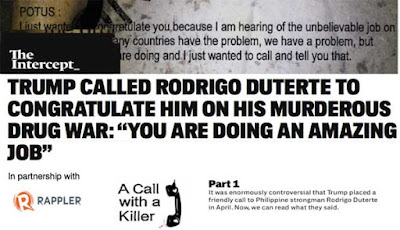 Omidyar’s nonprofit, the Omidyar Network, also funds the International Fact-Checking Network (IFCN) hosted by the Poynter Institute for Media Studies. IFCN has partnered with Facebook to help determine whether certain stories should be flagged as “disputed.”

Poynter’s IFCN is also funded by George Soros’ Open Society Foundations, while the Omidyar Network itself has partnered with Soros’s Open Society on numerous projects and given grants to third parties using the Soros-funded Tides Foundation. Tides is one of the largest donors to left-wing causes in the U.S.

The Intercept published the so-called leaked transcript in which Trump reportedly told Duterte that he was doing an “unbelievable job” in reducing his country’s drug problem and called Duterte a “good man.” Parts of the transcript were also published by the Washington Post.

In its characterization of the phone call, the Intercept claimed that “Trump offered an unqualified endorsement of Duterte’s bloody extermination campaign against suspected drug dealers and users, which has included open calls for extrajudicial murders and promises of pardons and immunity for the killers.”

The Intercept reported that it collaborated with the Philippine news outlet Rappler on the story and “well-placed sources at the Palace and the Department of Foreign Affairs in the Phillipines” confirmed the transcript’s authenticity to the Rappler.

The Intercept story contained the following “disclosure” about Omidyar: Omidyar Network is an investor in Rappler, an independent news organization based in the Philippines. The Intercept’s publisher, First Look Media, was founded by Pierre Omidyar.

The Omidyar-funded IFCN recently drafted a code of five principles for news websites to accept, and Facebook announced it will work with “third-party fact checking organizations” that are signatories to the code of principles.

Facebook says that if the “fact checking organizations” determine that a certain story is fake, it will get flagged as disputed and, according to the Facebook announcement, “there will be a link to the corresponding article explaining why. Stories that have been disputed may also appear lower in News Feed.”

Besides its funding for the so-called fact-checker partnered with Facebook, Omidyar also provided the seed donation for the Anti-Defamation League (ADL) – whose chief has baselessly smeared Breitbart News with claims of anti-Semitic associations – to build a Silicon Valley command center purportedly aimed at combating so-called online hate.


(A devout Buddhist and a follower of the Dalai Lama, the exiled Tibetan Buddhist leader, Omidyar has contributed generously to support that leader’s message and travels, both with his wife Pamela and through his foundation, Omidyar Network. He donated funds to support a think tank, the Dalai Lama Center for Ethics and Transformative Values, at MIT, and he hosted the Dalai Lama during a 2012 visit to Hawaii, where Omidyar lives.)