Breast Ironing In UK: As Widespread As FGM In Muslims

Hundreds of British mums 'breast-ironing' their daughters using red-hot rocks, hammers and spatulas. There are now calls for it to be made a criminal offence after revelations about the barbaric ritual emerged this week

Hundreds of British mums are "breast-ironing" their daughters using (heated) rocks, hammers and spatulas - with an MP now calling for the practice to be made a criminal offence. It is thought more than 1,000 women across the UK have been subjected to the barbaric ritual.

The sickening act is commonplace in parts of Muslim Africa, but those at the ­frontline of child protection say it is also happening in African Muslim communities in the UK. It has now resulted Conservative MP Jake Berry calling for "breast-ironing" to be made a criminal offence.


The ritual involves pounding the breasts as soon as they begin to develop with objects that have been heated over hot coals. Some women use rocks, others hammers and spatulas. One woman, who is remaining anonymous, told Sky News: "They put the spatula on the fire and then they press it on the breast and yes, it hurts. "Then it goes weak, it's like melting, fat melting and you can feel the breast going back… one of my breasts is bigger than the other one."

The idea is that by removing their breast tissue, youngsters will be less sexually attractive and less likely to become pregnant at a young age, ­preventing them bringing shame on their families. Sadly it is mostly carried out by the girls’ own mothers, who believe it is in their best interests.

MP Jake Berry was so shocked when he discovered the practice that he tabled a parliamentary debate on it, which took place earlier this week. He told the Commons: “The words ‘culture’, ‘tradition’ or ‘religion’ might come up when trying to explain this absurdly harmful practice, but as in the case of FGM , these words are only thinly veiled excuses for a ritualised form of child abuse .” 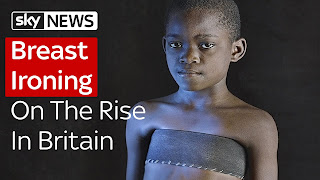 His research has shown that 15 per cent of UK police forces have never even heard of the procedure while four in 10 wanted more advice on how to tackle it. Mr Berry said he wanted breast ironing to become a criminal offence in its own right. No-one yet knows how widespread it is because no official figures are kept and many victims keep completely silent.

He said: “This hidden abuse is happening here in Britain and we have to seek out the abusers and push for prosecution. The Government needs to work across departments and with GPs and hospitals, including extending mandatory reporting, to shine a light on it. Not one person has ever been convicted of this crime in the UK. The lack of prosecutions partly stem from a fear by the victim of reporting a family member.”

Breast ironing is widespread in Cameroon. Margaret Nyuydzewira, founder of the CAME Women and Girls Development Organisation, a UK charity campaigning on behalf of victims, told The New Day that schools, the police and social services needed to help bring perpetrators before the courts.

She said: “Yes, it is happening in the UK. We have not done any studies to discover the prevalence at the moment, but we know it is happening through members of our community. The idea is that mothers are worried their children are developing at a faster rate.”

“It is brutal. There is a lot of trauma. Mothers are doing it with good intentions, to protect their daughters from sexual harassment, but it does not fit with British values. Women need to understand that what they are doing is harmful to their children and it may have a long-term impact. I cannot walk alone. We need the government’s support. We need to spread the word and talk to others.”

Cameroonian Marie Laure Jatsa, who has researched her country’s tradition for more than a decade, has interviewed 6,000 women to understand the phenomenon. She said: “Some parents believe that Europe should not get involved in their tradition. It’s ridiculous they live here and still have those barbaric customs. What’s incredible is that it is a woman doing it to another woman. Mothers truly believe that this is going to help their daughters to avoid an early pregnancy.” 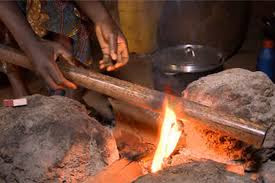 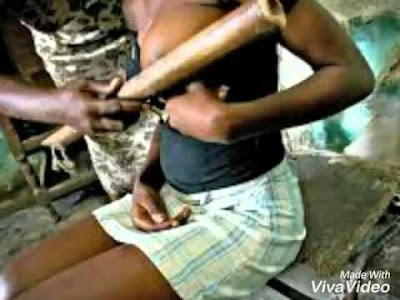 Breast ironing is practised throughout Cameroon and has also been reported across West and Central Africa, in Benin, Chad, Ivory Coast, Guinea-Bissau, Guinea-Conakry, Kenya, Togo and Zimbabwe. In South Africa, a similar practice is known as “breast sweeping”. There are thought to be around four million victims in Cameroon, with four in 10 schoolgirls affected.

It is estimated thousands of girls in African communities in London, Birmingham, Manchester, Luton, Nottingham, Leicester, Sheffield and Leeds may be exposed to the ritual, which usually happens in the family home. There have been two arrests in London and Birmingham, but no one has yet been charged.

Cameroonian doctor Flavien Ndonko said: “Breast ironing is both physically and psychologically damaging. It can cause infections and abscesses and has been linked to breast cancer, problems with breastfeeding, and severe depression.” The UN estimates that 58 per cent of perpetrators are the victim’s mother.

Victim's story: 'I was unable to feed my baby'

Cathy AbahFouda is a survivor of breast ironing and now works for RENATA, an NGO which campaigns against the practice. She said: “I started growing breasts when I was 10. "My mother explained to my sister that I was growing breasts too early and that I would attract boys.”


Cathy underwent breast ironing a first time, but a year later her breasts grew again and she was so ashamed she began to carry out the procedure on herself. “Breast ironing, however, did not prevent me from getting pregnant at the age of 16 and leaving school.” Her breasts were so damaged she needed surgery and was unable to breastfeed her baby.
Posted by Hla Oo at 4:22 AM