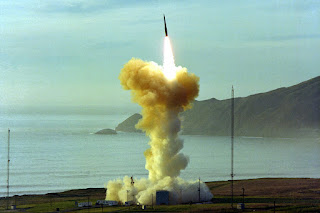 VANDENBERG AIR FORCE BASE, CALIFORNIA – An unarmed Minuteman 3 intercontinental ballistic missile was launched from California early Wednesday in a test of the weapon system that is part of the U.S. nuclear force.

The nuclear-capable missile blasted off from a silo at 12:03 a.m. from Vandenberg Air Force Base and delivered a single re-entry vehicle to a target approximately 4,200 miles (6,759 km) away at Kwajalein Atoll in the Pacific Ocean, the Air Force Global Strike Command said. The launch command was issued via an air launch control system aboard a Navy E-6 Mercury jet.

“Tonight’s launch was an important demonstration of our nation’s nuclear deterrent capability,” Col. John Moss, commander of Vandenberg’s 30th Space Wing, said in a statement. “Test launches like this one are vital to validating the effectiveness and readiness of our operational nuclear systems, so it is critical that they are successful.”


Operational tests of Minuteman 3 missiles are conducted regularly but the timing of Wednesday’s launch amid U.S. tensions with North Korea over its nuclear and missile programs drew criticism from the Nuclear Age Peace Foundation, which has advocated against nuclear weapons for more than 30 years.

“When it comes to missile testing, the U.S. is operating with a clear double standard: It views its own tests as justified and useful, while it views the tests of North Korea as threatening and destabilizing,” David Krieger, president of the organization, said in a statement on its website Monday.

“What is needed is diplomacy rather than military provocations. Threats, whether in the form of tweets, nuclear-capable aircraft carrier groups, or nuclear-capable missile launches, only increase the dangers to us all,” he said.

President Donald Trump has in recent weeks ordered an aircraft carrier and other Navy vessels into the region in a show of force to deter North Korea, which on Tuesday conducted large-scale, live-fire artillery drills.

On Wednesday, the White House hosted all 100 senators for a classified briefing on North Korea by Trump’s secretary of state, defense secretary, top general and national intelligence director. The briefing team was to meet later with House members in the Capitol. The most recent previous Minuteman 3 launch was in early February. 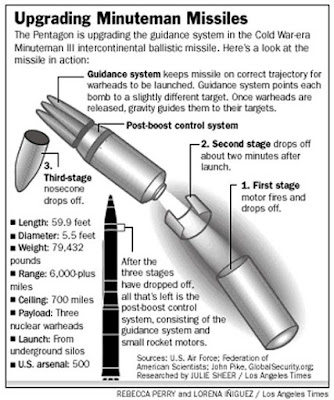 The infamous hacktivist group Anonymous has released a chilling new video — urging people across the globe to “prepare” for World War 3 — as the US and North Korea continue to move “strategic pieces into place” for battle. “All the signs of a looming war on the Korean peninsula are surfacing,” the group says in the ominous six-minute clip, posted on Youtube over the weekend.

Using their signature Guy Fawkes character, the hackers make several claims about recent military movements in the region — and alleged warnings made by Japan and South Korea about imminent nuclear attacks from the North — as they deliver their frightening war prophecy.

“Watching as each country moves strategic pieces into place,” the organization says, in their notorious robotic voice. “But unlike past world wars, although there will be ground troops, the battle is likely to be fierce, brutal and quick. It will be also be globally devastating, both on environmental and economical levels.”

According to Anonymous, President Trump’s test of the Minuteman 3 intercontinental ballistic missile last week — coupled with a recent warning from Japanese officials to citizens, telling them to make preparations for a possible nuclear attack — are ultimately proof that all signs are pointing to a major conflict between the US and North Korea. 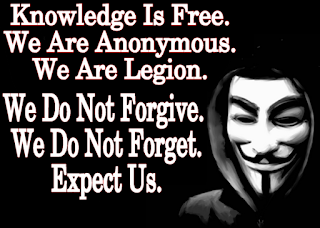 In addition, China has reportedly urged its citizens in the Hermit Kingdom to return home as tensions continue to escalate over their nuclear weapons program. “This is a real war with real global consequences,” the group explains. “With three superpowers drawn into the mix, other nations will be coerced into choosing sides, so what do the chess pieces look like so far?”

Anonymous — described online as a global network of hackers, intent on spreading “facts the government doesn’t want you to know” — claims the US and South Korea have been working together to keep the peace in the region, along with China and the Philippines, but their pleas have fallen “on deaf ears.”

They claim that the Trump administration has been also working closely with the Australians, sending a rotational deployment of more than 1,000 US troops to the country, along with a large fleet of military aircraft. Australia is ultimately considered to be a “strategic location in the Indian ocean,” Anonymous says.

“The citizen will be the last to know, so it is important to understand what the other nations are doing,” the group states, citing China’s warning last week to its people in the North. “The pragmatic Chinese, it seems, are starting to lose their patience.”

Another surefire sign that war is imminent, according to Anonymous, are the recent talks between President Trump and Philippines President Rodrigo Duterte.

The pair met at the White House a little over a week ago to discuss the situation with North Korea and other regional security threats. A readout later claimed that relations between the two countries were “heading in a very positive direction.”

“When President Trump starts reaching out to those like President Rodrigo Duterte of the Philippines to assure they are on the same page, one must start to wonder,” Anonymous says in the video. “However, even Duterte has advised the US to back away from Kim Jong Un.”

The group concludes the video with an eerie message for those watching around the world. “Prepare for what comesnext,” they say. “We are Anonymous. We are Legion. We do not forgive. We do not forget.”

The LGM-30 Minuteman III, built by Boeing, is an intercontinental ballistic missile (ICBM) being used by the US Air Force Combat Command. The Minuteman III is a vital component of the US strategic deterrent forces and the inventory is controlled by the Air Force Global Strike Command.

Minuteman III is a long-range, solid-fuel, three-stage ICBM with the capability to carry single or multiple nuclear warheads including the infamous W88 Thermo-nuclear Warhead nicknamed the Holocaust Bomb.

The Minuteman missile programme began in 1958 and the first missile in the series, Minuteman I, was test-launched in February 1961. Minuteman II, the second version in the series, was launched in 1964. Unlike its predecessor, the missile was considerably advanced to strike multiple targets with high accuracy.

LG-Minuteman III had three re-entry vehicles (RVs) though which it could independently aim at different targets within its overall target area or 'footprint'. The concept is termed as multiple independently targeted re-entry vehicles (MIRV). It has, however, been reduced to one under the Strategic Arms Reduction Treaty (Start) II signed between the US and Russia.
LGM-30 Minuteman III missile guidance and navigation

A programme is being undertaken to keep the missiles safe and secure for years to come, as part of an prolonged life extension. The programme includes replacement of the ageing guidance system, reproduction of the solid-propellant rocket motors, replacement of back-up power systems and repair of launch facilities.

The Minuteman missiles are placed in hardened silos for protection against attacks. Each launcher measures 80ft in depth and 12ft in diameter, and each missile site spreads over a surface area of up to three acres. The silos are connected to an underground launch control centre through a system of hardened cables. A crew of two officers in the launch centre provide 24/7 alert.

The president and secretary of defence use various communication systems to establish a virtual direct contact instantaneously with each launch crew. A specially configured E-6B airborne launch control centre aircraft automatically takes over the command-and-control of the isolated missiles if the command capability is lost between the launch control centre and remote missile launch facilities.


The propulsion is provided by three solid-propellant rocket motors developing a thrust of 200,000lb, 60,600lb and 34,000lb respectively. Thiokol supplied the first stage rocket motor while the engines for the second and third were provided by Aerojet-General and United Technologies Chemical Systems Division respectively. 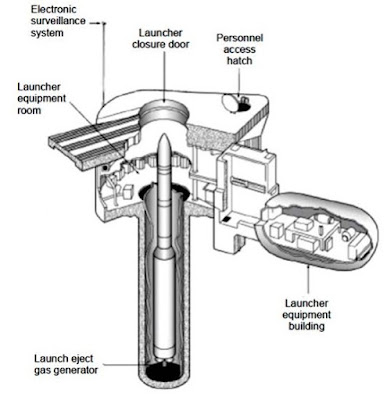 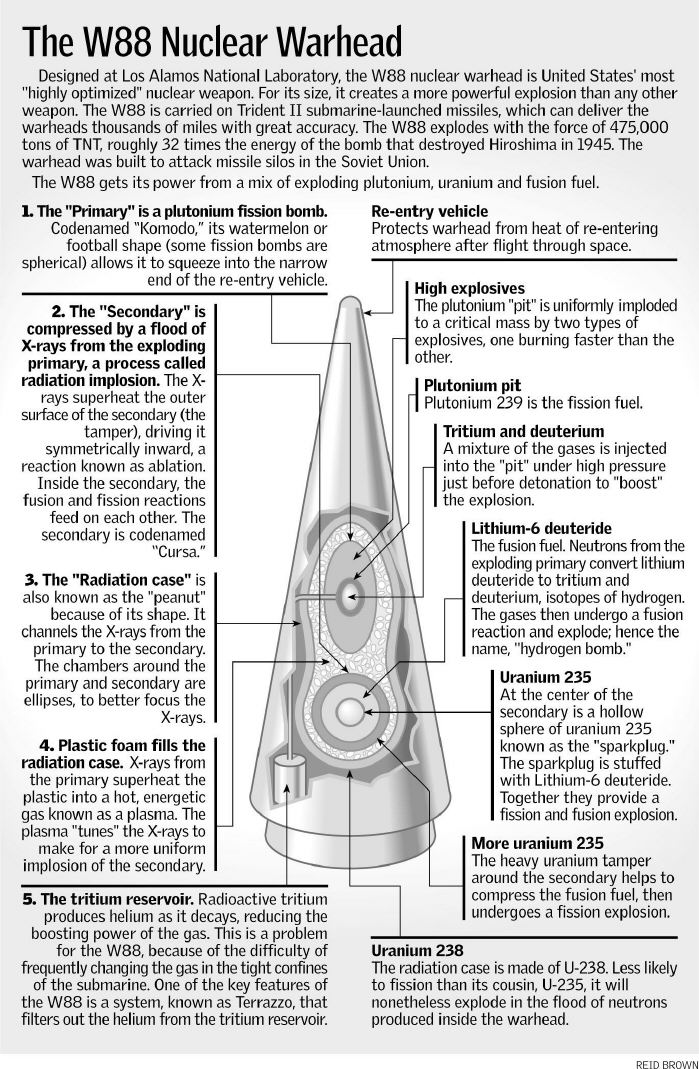