(Richard Heydarian’s article direct from The ASIA TIMES on 17 May 2017.)

Will OBOR really reach Southeast Asia? China has dangled various rich infrastructure initiatives to the region, but few so far have commenced due to tussles over costs, labor and sovereignty.

Chinese President Xi Jinping pledged at least US$113 billion in additional funds for his US$1.3 trillion One Belt One Road (OBOR) initiative, also known as the new Silk Road, at a recently concluded summit held in Beijing. But how much of those pledged Chinese funds will actually be delivered to neighboring Southeast Asia?

Asia confronts an astounding US$8 trillion infrastructure-spending gap over the next decade, according to Asia Development Bank projections. Despite fast economic growth, most Southeast Asian nations lack the resources to meet those needs and are eagerly seeking external assistance for meet the financial shortfall.


Top regional leaders, including Indonesian President Joko Widodo, Malaysian Prime Minister Najib Razak and Philippine President Rodrigo Dutetre, were among those in attendance at Xi’s ballyhooed summit. All three are known to be seeking large-scale Chinese investments, with Najib and Duterte making closer economic linkages to China a centerpiece of their foreign policies.

Over the past decade, Cambodia, Malaysia, and Myanmar have benefited from large-scale Chinese infrastructure projects ranging from roads, pipelines and ports. More recently, China has extended its reach to Indonesia and the Philippines, both of which are grappling with massive infrastructure shortfalls amid booming economic growth.

Under Duterte, Manila views Beijing as an indispensable partner for national development. The Philippines recently launched the “Dutertenomics” initiative, which ambitiously aims to usher in a “golden age of infrastructure” development by allocating US$167 billion over the next five years. China will likely serve as a key source of financing for at least 12 of the planned big-ticket projects.

While shouldering much of the cost, OBOR makes good economic sense for China. The massive initiative will help to dampen industrial overcapacity at home while simultaneously allowing it to divest from low-interest carrying US treasury bills into potentially higher-yielding and productive infrastructure investments. 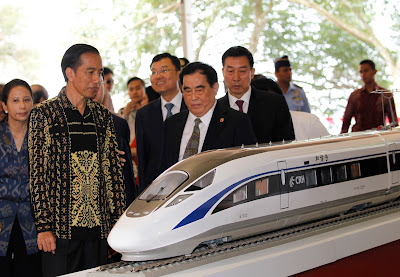 Major Chinese state-owned enterprises, which employ tens of millions of employees, are rapidly running out of lucrative projects at home. Analysts say those enterprises, a driving force behind OBOR, desperately need new markets particularly for their excess cement and steel production. Enhanced connectivity will also allow China to reduce logistical and transactional costs on its exports.

Duterte’s open embrace of Chinese economic assistance has raised certain sovereignty-related concerns at home. In the past, major Chinese-led infrastructure projects in the Philippines, particularly the NBN-ZTE national broadband and the Northrail railway projects, were mired in corruption scandals and bidding anomalies, the former nearly toppling Gloria Arroyo’s government.

Critics say that Duterte’s increased reliance on China’s higher than market rate interest loans may drive the country into ‘debt bondage’, similar to Sri Lanka, Venezuela and Laos, and weaken the Philippines’ delicate position in the South China Sea, where it faces continued threats to its territorial claims and maritime interests. 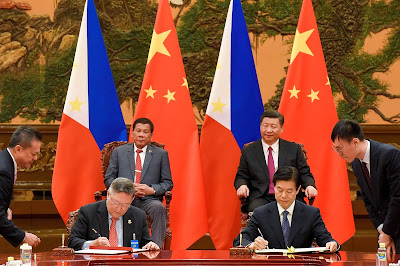 To win Beijing’s goodwill, the Filipino president, as the rotational chairman of the Association of Southeast Asian Nations (Asean), has actively guarded China against any criticism over its massive reclamation activities in the South China Sea. Meanwhile, to China’s delight, Duterte has also downgraded security cooperation with the US, the Philippines’ sole treaty ally.

Duterte has made it clear that he won’t raise sensitive bilateral issues, namely territorial disputes, during his meeting with the Chinese president on the sidelines of the summit. “To date, I have nothing to say except [my profuse] thanks to China for helping us,” the Filipino president said shortly before flying to Beijing after a stopover in Hong Kong. “One thing is very certain actually: China, in all good faith, wants to help us.”

In a reflection of the tight nexus between geopolitical and economic considerations, Duterte secured a US$500 million loan for arms purchases from China during his visit to Beijing. While China has pledged as much as US$26 billion in aid and assistance to Manila since Duterte rose to power last July, nearly none of those funds have as yet been delivered.

It’s a leit motif across the region. China’s pledged infrastructure projects in other neighboring countries, including high-speed rail lines in Indonesia and Thailand, have been hobbled by project delays, tussles over costs and environmental sustainability, and Beijing’s tendency to rely entirely on Chinese engineering, technology and labor to the exclusion of local sources.


Despite profound reservations over Beijing’s intentions, however, developing nations such as the Philippines will likely deepen their dependence on Chinese infrastructure assistance due to limited other options. Indeed, regional leaders such as Duterte seem determined to make the most out of the region’s emerging Sino-centric economic order.

Related posts at following links:
China Reshaping The World In Its Own Image
Posted by Hla Oo at 8:43 PM