(Nadeem Paracha’s article direct from The DAWN Magazine on 12 April 2015.)

The first Pakistani? Ever since the early 1970s, the Jamaat-i-Islami (JI), has been frequently organising ‘Yaum Babul Islam’ — an event in which the party celebrates the conquest of Sindh by Arab commander Mohammad Bin Qasim (in the 8th century CE), explaining it as the ‘advent of Islam in South Asia’.

Speakers at this event also describe Qasim as the ‘first Pakistani’ and then trace and place the creation of Pakistan to the arrival of the Arab commander 1,300 years ago. Overplayed or underplayed by historians and scholars, this general from Arabia remains a mystery to many.

Curiously, the JI was originally opposed to the man who actually created Pakistan (in 1947): Mohammad Ali Jinnah. JI’s founder, Abul Ala Maududi, had found Jinnah to be steeped in the ‘Western notion’ of nationalism and too Westernised to deliver and head a Muslim state.


So one can suppose that the whole idea of an ancient Arab commander being posthumously raised to become the main architect of what hundreds of years later would become Pakistan, is more in tune with JI’s Arab-centric concept of Pakistani nationhood.

But it wasn’t really the JI that had first initiated the idea of dressing up an 8th century Arab as the true founder of Pakistan. This impression which, from the late 1970s onwards, has found ample space in the country’s school text books, was first alluded to in a 1953 book, Five Years of Pakistan.

The book was published by the government to commemorate the fifth anniversary of Pakistan. In a chapter authored by archaeologists associated with a state-funded archaeology project, the authors describe Sindh (after it was invaded by Qasim), ‘as the first Islamic province in South Asia’.

In a recent detailed essay on the subject, Manan Ahmed Asif (a professor of history at Columbia University), informs that although allusions to Qasim being the ‘first Pakistani’ can be found in various publications after 1953, he was first officially adopted as the ‘first citizen of Pakistan’ in Fifty Years of Pakistan published by the Federal Bureau of Pakistan in 1998.

The whole notion of Qasim’s invasion of Sindh being the genesis of a separate Muslim state in South Asia was first imagined by a handful of Pakistani archaeologists in 1953. It then found its way into the narrative of religious parties such as the JI, before being weaved into school text books (by the populist Z.A. Bhutto regime) due to the severe existential crisis that the country faced after its Eastern wing (former East Pakistan) broke away in December 1971 to become Bangladesh.

The notion was then aggressively promoted by the reactionary Ziaul Haq dictatorship (1977-1988), as a way to explain Pakistan as a nation that had deeper roots in the ancient deserts of Arabia than in the congested expanses of South Asia. What’s most interesting is the fact that as far as the region’s history is concerned, or even that of the Arabs, Qasim’s foray into Sindh was not quite the significant event it is made up to be.

Professor Manan speaks of a silence that usually greets historians when they go looking for ancient sources about the event; there are almost none. This gives rise to the question, if Qasim’s invasion of Sindh was such a grand undertaking, why is it only scarcely mentioned in the available textual sources from the period?

The earliest available source to mention the invasion is the 9th century book Kitab Futuh al-Buldan by Arab historian al-Baladhuri. It was written more than a hundred years after the invasion. Then there is also the 13th century Persian text called Chachnama that was authored almost 400 years after Qasim’s forces arrived on the shores of Sindh.

When historians such a Prof Manan and Dr Mubarak Ali piece together whatever little early sources there are about the event, it transpires that the Arabs had first begun to exhibit interest in Sindh in 634 AD.

The Umayyads (the first major Muslim empire), sent troops to conquer Sindh on a number of occasions between 644 AD and 710 AD. Most of these raids were repulsed by local tribes, even though at times Arab armies did manage to hold on to Makran (south of Sindh), but not for long.

The reasons for the Umayyad to enter the region were many: it was a rapidly expanding empire and wanted to get a toehold in the region. It wanted to gain control of the region’s lucrative port trade. It also sent in troops to crush renegades and rebels that used to escape to Makran from the Umayyad mainland, sometimes to hide and sometimes to organise attacks against the empire from here. Such rebels included the radical Kharajites who had established a clandestine foothold in Makran.

The popular narrative found in most post-9th century Muslim history books about Qasim’s invasion sees him being sent here by Umayyad governor in Baghdad to avenge the plundering of Arab ships by Sindh’s pirates and the refusal of Sindh’s ruler, Raja Dahir, to do anything about it.

Historians such as Dr Mubarak Ali and Prof Manan who have tried to substantiate this narrative with the help of authentic sources have found only sketchy evidence to validate this account.
Manan concludes: ‘Qasim’s expedition was merely the latest in a 60-year long campaign by Arab regimes to gain a foothold over the port trades and to extract riches from these port communities (in Sindh and Makran) …’

Qasim’s supposedly genesis-like manoeuvres in Sindh are also largely a myth. In 731 when al-Hakim al-Kalbi was appointed governor of Sindh (some 20 years after Qasim’s death), he found a land where a majority of those who had converted to Islam (during Qasim’s stay here), had reverted back to being either Hindu or Buddhist. So much for Qasim’s Sindh being the genesis of Pakistan.

The question now is if Qasim’s invasion was comparatively a minor historical event, how did it become so inflated? We have already seen how and why it gained such an existential significance in Pakistan. It was almost forgotten about for hundreds of years, even during much of the 500-year long Muslim rule in India.

Interest in Qasim was ironically reignited by British colonialists in the 19th century. British author, James Mill, in his book The History of British India (1817), mentions Qasim as an invader who created a rupture in the region.

Hill presents very little evidence but his lead was followed by other British authors of the era who all saw Qasim as the man who opened the gates for hoards of Muslim invaders to pour in and destroy the Indian civilisation. This narrative of a bloodletting Qasim was then picked up by early Hindu nationalists, some of whom who had largely forgotten about this 8th century Arab!

A couple of 19th century Muslim historians, Syed Suleman Nadvi and Mohammad Hanif responded by offering a more studied look at Qasim’s invasion, describing it as nothing like the one that was being peddled by the British colonialists and early Hindu nationalists.

They portrayed Qasim as a just, tolerant and gallant man. Both these versions of the man emerged from the highly polemical debate on Qasim’s invasion that erupted in the 19th century between the British, Hindu and Muslim historians.


The truth is, to non-aligned history, Qasim remains to be an enigmatic figure of which sources say very little. But ever since the 19th century, he has become an overtly glorious myth to some, and an equally mythical force of destruction to others. Historical truth has nothing to do with either version. 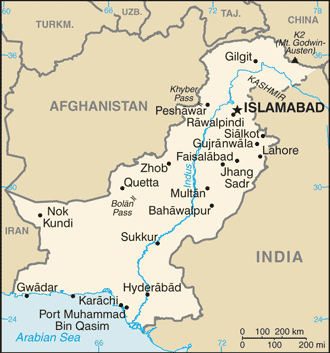