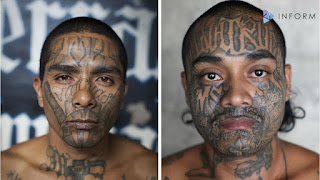 The recent eruption of gang violence on Long Island in New York City— highlighted by the discovery of the mutilated bodies of four young men in a public park — fits what experts and sources say is a new and more deadly profile of MS-13.

At the heart of that profile are newcomers from Central America eager to make their mark within an immigrant gang already known for its code of brutality and its weapon of choice, the machete, the sources say.

They represent a very small but dangerous cohort among the thousands of young people under 18 who, according to federal statistics, have illegally entered the United States unaccompanied by adults but let in by the Obama Administration since 2015.

These newcomers have found a niche in MS-13 on Long Island — replacing those who have been arrested — and are focused on proving themselves to be even more violent than established gang members.


Experts say MS-13 is distinguishable among gangs in that its hallmark is not to shake down store owners or to protect drug-dealing operations. Instead, members commit violence for its own sake, in large part as a way to carve out and control the turf they consider theirs, purging it of rival gang members and others perceived as having disrespected MS-13.

Brutality for MS-13 is “considered as part of their identity . . . with their DNA,” said Hector Silva, a former deputy chief of mission at the Washington embassy of MS-13’s home base, El Salvador. An expert on the gang, he is now a research fellow at the Center for Latin American and Latino Studies at American University in Washington.

The quadruple homicide in Central Islip last month and other killings linked to MS-13 -- including the beating deaths of two teenage girls from Brentwood last year -- have generated fear within the immigrant communities where MS-13 is a fact of daily life. Most but not all declined to speak about the group.

“The reality is we’re all living in panic right now,” said Maria Estrada, 46, of Central Islip. “You see them [gang members]. It’s very common that you walk down the street, and you see kids that belong to the gang. And you have to drop your head. You live with fear, and I feel terrorized.”

The escalating brutality is starkly depicted in a video that surfaced after the Central Islip killings. It shows the bodies of the four young males — not just slain but also mutilated with both blunt and sharpened weapons, possibly baseball bats and machetes, sources said. Authorities acknowledge the existence of the video but won’t comment on its contents because of the ongoing investigation.

The killings of the two girls, Kayla Cuevas, 16, and Nisa Mickens, 15, as well as that of an MS-13 member, Jose Pena, 18, suspected of being an informant, “exemplify the depravity of a gang whose primary mission is murder,” then U.S. Attorney for the Eastern District Robert Capers said in March.

The machete is a principal weapon used by MS-13 members, in part because of its savagery, but also because it is commonly available and used for agriculture in Central America, sources say. It is a cheaper to purchase both there and in the United States, where guns are harder to obtain and more expensive, several experts said. 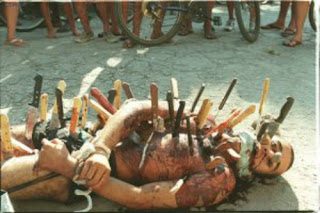 MS-13 members don’t typically have great financial resources. Recently arrested members of the gang have been employed as restaurant workers, car washers, landscapers, salad makers and sheet-metal platers, sources said. A member of MS-13 usually puts in an eight-hour day at a low-paying job, say the sources -- but then is required to go out at night and “put in work,” or hunt down perceived enemies.

Suffolk County Sheriff Vincent DeMarco, who said there are 26 members and associates of the gang in the county prison system, said he has seen MS-13 members get younger and more violent over time. “What you’re seeing is that they’re younger. And that’s very alarming because they are so desensitized to violence and committing violence at such a young age,” he said.

“Some of these are 16, 17, 18-year-olds who have no problem with hacking somebody up with a machete or knocking someone’s brains out of their head with a bat or a sledgehammer, and it doesn’t even faze them,” DeMarco added.

Federal prosecutors have charged six members of MS-13 in connection with the September killings of the two Brentwood High School girls. There have been no arrests in the killings of the four males in Central Islip — Justin Llivicura, 16, of East Patchogue; Jorge Tigre, 18, of Bellport; Michael Lopez Benagas, 20, of Brentwood; and Jefferson Villalobos, 18, of Pompano Beach, Fla., who was visiting his cousin, Benagas.

Suffolk Police Commissioner Timothy Sini said the injuries to Mickens and Cuevas “were some of the worst wounds I’ve ever seen.” The skeleton of gang member Pena, who also attended Brentwood High School, was recovered in October on the grounds of the Pilgrim Psychiatric Center in Brentwood. It “bore the mark of numerous stab wounds, “Capers said.

The degree of recent bloodshed on Long Island is remarkable, according to experts. “I don’t have any recollection of that sort of a body count in my 30-year career,” says Ron Hosko, the retired head of the FBI’s Criminal Investigative Division.

Those who have studied MS-13 say instances in which numerous victims were repeatedly mutilated with sharp and blunt instruments are more typical of the group’s operations in El Salvador.

“That’s the type of violence found typically in Central America,” said Charles Katz, a professor at the University of Arizona, an expert on MS-13 who directs the school’s Center for the Prevention of Violence and Community Safety.

But some who have studied the situation disagree with that assessment. Fulton Armstrong, a research fellow at American University’s Latin Center, in Washington, and who has been a staffer on Latin American issues for both the National Security Council and the Senate Foreign Relations Committee, says the Justice Department has been waging a war against gangs such as MS-13 for decades.

“It’s outrageous for the Trump administration to try to blame the gang phenomenon on Obama,” Armstrong said in an email. “We were working this problem long before Obama took office, and Bush-Cheney policies were significant drivers.”


The violent culture of MS-13 comes out of the at-times lawlessness of El Salvador, where police and the army and street gangs in poorer neighborhoods have waged fights for control with almost no holds barred, Silva and Katz say.

For the most part, MS-13 gang members who come to the United States settle in areas where there are already Salvadoran communities — on Long Island in Brentwood, Central Islip, Huntington Station, Hempstead and Freeport.

Silva says they are “embedded” among the law-abiding members of such communities, and will survive as long as people in those communities won’t turn on them because of fear of their terror or a distrust of law enforcement. Authorities have made frequent pleas for assistance and tips to members of the immigrant communities.

Community activist Carolyn Baez, director of programs at Youth Enrichment Services, said she was in her office directly across from where the four Central Islip bodies were found and saw a number of parents concerned, fearing their children were among the dead. Among them was a woman who was crying. “She said, ‘I think one of the victims that was killed was my son, but I can’t say anything because I’m undocumented.’”

Baez says MS-13 members get involved in violence because they see it as the norm in their countries. “I look at these kids’ faces,” Baez said. “And I say what’s going to happen tonight? What’s going on in their lives? Am I going to see them again?”

NEW YORK — More than a dozen members of the MS-13 gang were indicted Thursday on seven killings on Long Island spanning three years, including the deaths of several high school students last year.

Two of the students — Nisa Mickens, 15, and Kayla Cuevas, 16 — were beaten with baseball bats and a machete, Capers said. The girls attended Brentwood High School in Brentwood, a working-class community in Suffolk County, about 45 miles east of New York City. 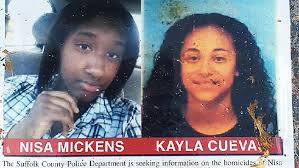 At the time, police said there appeared to be gang involvement in the girls’ deaths and the deaths of two others, whose skeletal remains were found after they had been missing for months. Police have not announced arrests in the latter two deaths.

“The Brentwood family has spent the last six months in mourning, but today marks the beginning of the healing process for this beautiful and resilient community,” Suffolk County Police Commissioner Timothy Sini said.

A passerby found Nisa’s body on a Brentwood street on September 13, the eve of her 16th birthday, Sini said. The next day, Kayla’s body was discovered in the backyard of a nearby home. The two best friends had gone for a walk the night before, News 12 reported.

“My message to the people of Brentwood and all of Suffolk County is that although we are keenly aware that nothing will ever undue the heartbreaking loss of Nisa and Kayla, we can take solace in the fact that their savage murderers will be held accountable,” Sini said.

Authorities said a third Brentwood High School student, Jose Pena, 18, was killed on June 3, 2016. His skeletal remains were discovered on October 17, 2016, in a wooded area that served as a burial ground for MS-13 victims, Capers said. “His bones bore marks of repeated stab wounds and beatings with a bat, a blunt force instrument,” Capers said.

Sini said Suffolk police have cracked down on gangs. Police have collected intelligence on MS-13 members and created a list of gang members to put under surveillance. Officers have arrested members for various crimes, he said. Since September 2016, Sini said, 125 MS-13 members have been arrested. “We are going to eradicate MS-13 from these communities,” Sini said.

More than 30,000 members operate mostly in El Salvador, Mexico, Honduras and Guatemala, federal authorities said. MS-13 is the largest and most violent street gang on Long Island, the US Attorney’s Office said.

Capers said two of the suspects are US citizens. A third suspect is a legal permanent resident and the rest are undocumented immigrants, Capers said. If convicted, the defendants could face up to life in prison or the death penalty. 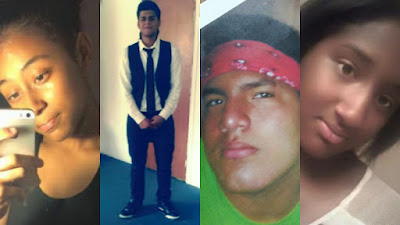