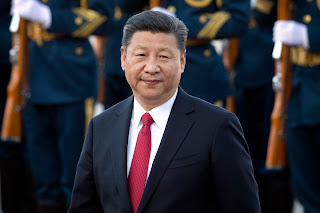 China's Spending $500 Billion to Reshape the World in Its Image: China is one of the few countries in the world today with money to spend, and Xi Jinping is ready to write some checks.

China’s president will host almost 30 world leaders in Beijing on Sunday at the first Belt and Road Forum, the centerpiece of a soft-power push backed by hundreds of billions of dollars for infrastructure projects. More than 100 countries on five continents have signed up, showing the demand for global economic cooperation despite rising protectionism in the U.S. and Europe.

For Xi, the initiative is designed to solidify his image as one of the world’s leading advocates of globalization while U.S. President Donald Trump cuts overseas funds in the name of “America First.” The summit aims to ease concerns about China’s rise and boost Xi’s profile at home, where he’s become the most powerful leader since Deng Xiaoping died in 1997.


The Belt and Road Initiative “will likely be Xi’s most lasting legacy,” said Trey McArver, the London-based director of China research for TS Lombard, an investment research company. “It has the potential to remake global -- particularly Asian -- trade and economic patterns.”

The strategy also carries risks. The initiative is so far little more than a marketing slogan that encompasses all sorts of projects that China had initiated overseas for years, and major world leaders like Trump, Angela Merkel and Shinzo Abe are staying away. How Xi answers a range of outstanding questions will go a long way in determining its success.

Key to reducing uncertainty will be addressing the concerns of strategic rivals like India, Russia and the U.S., particularly as China’s growing military prowess lets it be more assertive over disputed territory. Chinese moves to spend more than $50 billion on an economic corridor in Pakistan, build a port in Djibouti and construct oil pipelines in central Asia are all creating infrastructure that could be used to challenge traditional powers.

“China needs to recognize that the way it perceives the Belt and Road Initiative (BRI) is not necessarily the same way others will,” said Paul Haenle, a former China director on the U.S. National Security Council who now heads the Carnegie-Tsinghua Center in Beijing. For countries like the U.S., he said, “it’s impossible not to view the BRI through a geopolitical lens -- a Chinese effort to build a sphere of influence.”

In September 2013, when Xi first pitched the plan at an obscure Kazakhstan university, he focused on the Eurasia landmass. Since then, it has repeatedly changed names and expanded to include the entire world, with the main goal of rebuilding the ancient trading routes from China to Europe overland and by sea.

One key driver was economic: China wants to spur growth in underdeveloped hinterlands and find more markets for excess industrial capacity. With more than $3 trillion in international reserves -- more than a quarter of the world’s total -- China has more resources than developed economies struggling to hit budget targets. 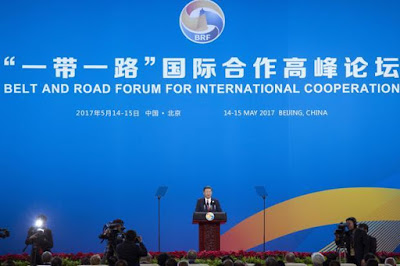 The plan gained steam last year when populist movements spurred a backlash against trade and immigration in the U.S. and Europe. Brexit raised questions about the European Union’s viability, while Trump’s withdrawal from the Trans-Pacific Partnership gutted the biggest U.S. push to shape global economic rules.

“It was very disappointing, and it makes us feel that there is a big vacuum that Belt and Road can help to fill,” Cheah Cheng Hye, chairman and co-chief investment officer at the Hong Kong-based Value Partners Group. “So all of sudden, we begin to appreciate this Chinese initiative.”

Xi wasted no time filling the void. With exporting nations looking for a free-trade champion, he told the global elite in Davos, Switzerland, to resist protectionism and join China in boosting global commerce.

The U.S. and Europe “almost unwittingly” created space for Xi to push China’s interests, according to Peter Cai, research fellow at the Lowy Institute for International Policy. “China is offering an alternative to the U.S. version of globalization,” Cai said. “In the Chinese case, it’s globalization paved by concrete: railways, highways, pipelines, ports.”

This year, five European countries -- Denmark, Finland, Switzerland, France and Italy -- openly voiced support for the initiative. On trips to China in February, Italian President Sergio Mattarella proposed plans for the ports of Genoa and Trieste, while French Prime Minister Bernard Cazeneuve attended the arrival ceremony of a freight train from Lyon.

The summit will feature the likes of Russia’s Vladimir Putin, Greece’s Alexis Tsipras and the Philippines’ Rodrigo Duterte. The U.S. will send Matt Pottinger, a special assistant to Trump and senior director for East Asia on the National Security Council, according to State Department spokesman Justin Higgins.

A draft communique circulated before the event combined a commitment to open markets with endorsements of China’s diplomatic goals, Bloomberg reported Wednesday, citing people familiar with the document. It also generated some controversy among Beijing-based diplomats who said they didn’t have enough time to vet the document, underscoring the initiative’s potential to cause conflict.

China has invested more than $50 billion in Belt and Road countries since 2013, according to the official Xinhua News Agency. Credit Suisse Group AG said this month that China could pour more than $500 billion into 62 countries over five years.

China’s state-run companies like China National Petroleum Corp. and China Mobile Ltd. -- the world’s largest wireless carrier -- are positioned to reap the rewards. Executives from six of China’s largest state-run firms sought to reassure the public this week that the risks were manageable.

China’s three development banks, its Silk Road Fund and the China-led Asian Infrastructure Investment Bank were involved in $39 billion of lending outside of the country last year, up about 50 percent from 2014, according to data compiled by Bloomberg.

“One Belt, One Road -- I think, it is potentially a plus,” JPMorgan Chase International Chairman Jacob Frenkel told Bloomberg Television on Friday. “And we should not worry about it because what it does is basically connects hundreds of millions of people, hundreds of millions of markets. And you know what? If somebody gains from it, that’s perfectly fine.”

Still, financial hurdles are starting to appear. China’s slowing economic growth has left fewer resources to spend overseas. Its international reserves have fallen about 6 percent over the past year, and China needs a healthy amount to defend the yuan.

Some previous Chinese ventures abroad have turned sour. While China’s no-strings-attached approach to investment is generally welcomed by developing countries, they often have poor credit ratings and questionable governance. China has struggled to recoup loans in Venezuela and Africa, and several projects in Central Asia have spurred protests. Announcements with big dollar signs often fail to materialize.

Nonetheless, Chinese scholars see the sum of Xi’s plan as bigger than any individual project. It represents a “profound change” in how China interacts with the world, according to Wang Yiwei, director of at Renmin University’s Institute of International Affairs in Beijing, who has written three books on the initiative.

“China has moved from a participant of globalization to a main leader,” he said. “It’s Globalization 2.0.”

India has strong reservation over the China-Pakistan Economic Corridor, a flagship project of the connectivity initiative that is expected to figure prominently in the two- day Belt and Road Forum summit.

When inquired, Indian diplomats here pointed to the statement issued by MEA spokesperson Gopal Baglay on Saturday night. “No country can accept a project that ignores its core concerns on sovereignty and territorial integrity,” he said.

The meeting called the Belt and Road Forum (BRF) is being attended by 29 heads of state and governments including Prime Minister of Pakistan Nawaz Sharif and his Sri Lankan counterpart Ranil Wickrmasinghe, besides official delegations from other South Asian countries.

Leaders and officials from various countries including Russia, US, Japan, UK, Germany and France are attending the meeting. In a strongly-worded statement issued last night, India had said that the connectivity initiative must be pursued in a manner that respects sovereignty and territorial integrity.


“Guided by our principled position in the matter, we have been urging China to engage in a meaningful dialogue on its connectivity initiative, ‘One Belt, One Road’ which was later renamed as ‘Belt and Road Initiative’. We are awaiting a positive response from the Chinese side,” Baglay had said in a statement.

India’s refusal to join B&R will not hamper cooperation among other countries: While India recently issued an official statement saying it would not be part of the "One Belt and One Road" (B&R) initiative, it will not affect the trend toward cooperation in infrastructure development among its neighboring countries at all.

According to media reports, India was openly sceptical of China's Belt and Road Forum hours ahead of the opening of the event, mainly due to concerns over the China-Pakistan Economic Corridor (CPEC), a key project of the B&R, and whether it might influence the disputed Kashmir region.

The B&R is a grand economic cooperation and development plan open to everyone, and is aimed at improving infrastructure in countries along the B&R route, thus benefiting the local people. China would never force any country to participate in the B&R if it was too skeptical and nervous to do so. It is regrettable but not a problem that India still maintains its strong opposition to the B&R, even though China has repeatedly said its position on the Kashmir dispute would not change because of the CPEC.

India also cited the potential debt burden as one of its other concerns, saying that, "Connectivity initiatives must follow the principles of financial responsibility to avoid projects that would create an unsustainable debt burden for communities." It is strange that the onlooker is more anxious than the players. While India cares about its neighbors' debt burden, the neighbors appear willing to take on more.

On Saturday, Pakistan and China inked new deals worth nearly $500 million, covering airport, port and highway construction. As regards the potential debt burden, Pakistan's repayments will peak at around $5 billion in 2022, but this will be offset by transit fees charged in the CPEC, Reuters reported on Saturday, citing the government's chief economist.

Last week, Nepal officially signed a deal with China to join the B&R, and the country is also reportedly in talks with China to build a cross-border rail link that may cost up to $8 billion.  As such, given the active responses from countries along the route, there is no way for India to impede its neighboring countries from cooperating with China in infrastructure development.

China has formally invited India to join the B&R. If India doesn't want to take a part on the stage, then it should just be a good member of the audience. The role is still available if India changes its mind, but it may only be a small role if it is left too late. 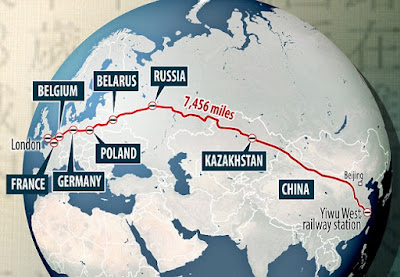 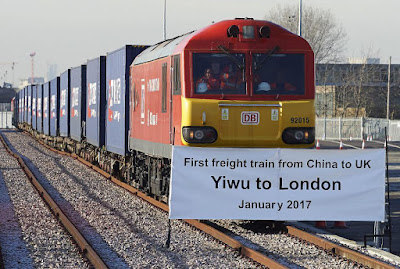 Related posts at following links:
Direct Train From London Arrived China In 20 Days.
Posted by Hla Oo at 4:38 AM