NEW DELHI: Police have detained four members of a hardline Hindu militia founded by the chief minister of Uttar Pradesh on suspicion of killing a Muslim man who had helped an interfaith couple elope, an investigating official said on Wednesday.

A 60-year-old Muslim farmer was killed on Tuesday by a mob that included members of the Hindu Yuva Vahini, or Hindu Youth Force, set up by Yogi Adityanath, a priest recently named by Prime Minister Narendra Modi to lead India's most populous state.

Adityanath, backed by his volunteer force, spearheaded the campaign of Modi's Bharatiya Janata Party (BJP) in this year's Uttar Pradesh state polls, helping to secure a landslide victory in the northern state.

Since his appointment, units of the Hindu Yuva Vahini have ramped up their anti-Muslim rhetoric and launched a campaign against so-called "Love Jihad" - what they regard as an Islamist strategy to convert Hindu women through seduction and marriage.


"The case of a Hindu girl eloping with a Muslim boy led to religious tension and members of the Hindu Yuva Vahini declared it was Love Jihad," said Jagdish Sharma, a police officer leading investigations in Bulandshahr district, 70 km (40 miles) to the southeast of India's capital New Delhi.

"The Muslim farmer was beaten to death in a mango orchard after he refused to share the whereabouts of the couple," said Sharma. The spokesman of the Hindu Yuva Vahini, P.K. Mall, denied that any members of Adityanath's youth force had been involved in the attack. "We don't want Muslims to convert Hindu girls but we are not involved in any criminal activity," he told Reuters. "There is a clear conspiracy to insult Yogi Adityanath and our religious group."

Adityanath, who heads a Hindu sect based in eastern Uttar Pradesh, has a history of rabble-rousing street politics, and his sudden rise to political prominence has stoked tensions with Muslims who make up 19 percent of Uttar Pradesh's 220 million people.

Since his appointment, members of the Hindu Yuva Vahini have called on police to enforce a ban imposed by Adityanath on illegal slaughterhouses and taken action to halt sales of meat from unlicensed butchers' shops run by Muslims. Adityanath, according to Indian media reports last weekend, urged members of the group "behave with decency".

Police said the suspects were enraged over a Muslim boy and a Hindu girl eloping last week and thrashed 55-year-old Gulam Mohammad on Tuesday when he was unable to divulge details of the absconding couple.

“Three accused have been arrested and the hunt is on for the main accused,” said Jagdish Sharma, superintendent of police (rural) of Bulandshahar. Police are probing if the three men belong to the Vahini. The group has denied any involvement and blamed policemen close to the previous Samajwadi Party administration for trying to malign the Vahini.

“If anyone was found involved, they would be expelled from the Vahini. Our leaders and activists are disciplined soldiers and they cannot be involved in this kind of violence,”said Nagendra Tomar, divisional president of the group. Tomar blamed an Urdu TV journalist for provoking the complainant and said the local police didn’t investigate properly.

Last month, Vahini members were accused of barging into a Muslim man’s house in Meerut and thrashing him after finding him allegedly in a compromising condition with a Hindu woman. Adityanath, who founded the right-wing organisation in 2002, has said he wouldn’t tolerate any vigilantism or actions that broke the law. 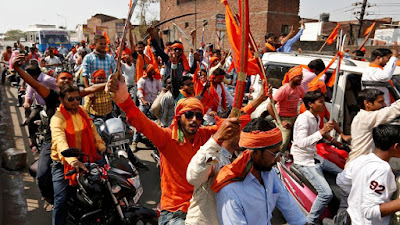 Local residents in Sohi village, near Pahasu in Bulandshahr district, said the Muslim man worked in Saudi Arabia and came to the village on April 11 for vacations. He fell in love with a Hindu woman and eloped on April 27, triggering tensions in the area, they added. Angry Hindu families in the area were allegedly mounting pressure on the four Muslim families to help trace the couple.

On Tuesday, five or six Vahini members arrived in the village to question Muslim families and allegedly threatened them with dire consequences if the couple wasn’t found soon, police said. When they were walking out of the village, they saw Gulam sitting and asked him about the whereabouts of the couple.

When he refused to answer, the group allegedly began thrashing the elderly man, who was rushed to hospital but died on the way. His death sparked communal tensions in the area and his son lodged an FIR against Vahini members. Gulam’s son told HT over the phone that the Muslim families had tried their best to trace the couple but failed.

Who is Yogi Adityanath The Chief Minister Of Uttar Pradesh?

A five-term Lok Sabha MP, BJP leader Yogi Adityanath, who was sworn-in as Chief Minister of Uttar Pradesh on Sunday, is a fiery Hindutva mascot and has developed a reputation of being controversy's favourite child over a period of time.

Forty four-year-old Adityanath, a priest-turned-politician, is known for his provocative speeches and mass following across the state and never shies away from making controversial remarks, be it about Islam or Pakistan. 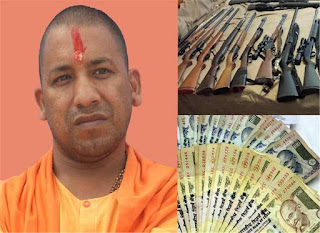 Clad in his trademark saffron-coloured robe, Aditayanth, a Gorakhpur MP, has been seeking greater power and is expected to give a push to BJP's Hindutva-wrapped agenda of development with the emergence of a separate powerbase for the party in eastern UP.

Born Ajay Singh, the diminutive shaven headed politician who heads the Gorakhnath Mutt, is known for his powerful oratory, though most of his speeches hinge on divisive lines and has been in the forefront in keeping the communal politics alive in the country.

Adityanath, who is a strong votary of construction of a Ram temple at the disputed site in Ayodhya, drove BJP's Hindutva campaign in eastern UP in the just concluded Assembly polls in the politically crucial state where it won three- fourths majority.

Adityanath has rebelled against his party on several occasions, but because of the sway he holds over the 'Hindu' voters, the BJP apparently could not ignore his 'leadership qualities'. He had floated Hindu Yuva Vahini, a right-wing outfit, in 2002. Ever since, the HYV has been largely instrumental in his meteoric rise - from a student leader to five-time MP.

Right from comparing Bollywood actor Shah Rukh Khan to Pakistani terrorist Hafiz Saeed during the intolerance debate in 2015 to asking people to leave India if they don't practise Surya Namaskar in 2015, the Yogi has been unbashed about his provocative views.

Playing the religious card during the pre-poll campaign, the firebrand leader had said that issues like 'love jihad' and 'Kairana Hindu' exodus have always been on his party s agenda. He had also said that the hurdles on the path of construction of a grand Ram temple will be gradually removed and its work will soon start in Ayodhya.

In 2005, Adityanath allegedly led a "purification drive" which involved the conversion of Christians to Hinduism. In one such instance, 1,800 Christians were reportedly converted to Hinduism in the town of Etah in UP. 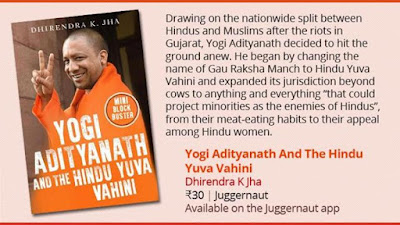 In January 2007, an altercation involving a Hindu group and Muslims broke out during a Muharram procession in Gorakhpur which led to the hospitalisation of a young Hindu, Raj Kumar Agrahari. The District Magistrate had made it clear that Adityanath should not visit the site as it may inflame tensions. He initially agreed but after Agrahari died, he disobeyed the magistrate and travelled to the site with a group of his followers.

Adityanath then started a non-violent dharna on the site. However, inflammatory speeches were made and some of his followers even set fire to a nearby mazar (Muslim mausoleum). Curfew was imposed by the local police, but Adityanath broke it and was subsequently jailed.

He was arrested and remanded for a fortnight on charges of disturbing peace. His arrest led to further unrest and several coaches of the Mumbai bound Mumbai-Gorakhpur Godan Express were burnt, allegedly by protesting Hindu Yuva Vahini activists. The tensions escalated to riots across Gorakhpur leading to the burning of mosques, homes, buses and trains.

During the intolerance debate in the media, Adityanath compared Bollywood superstar Shah Rukh Khan to Pakistani terrorist Hafiz Saeed. He had said, "Shah Rukh Khan should remember that majority population of the country made him the star, and if they boycott his films, he will also have to wander on streets. It is unfortunate SRK is speaking the same language that of Hafiz Saeed."

That he is not someone who minces words while expressing himself was manifested when he came out full throttle for yoga in the midst of controversy over the issue saying that those who oppose Surya Namaskar can leave India. He also made a request that those who see communalism in even Sun God should drown themselves in the sea or live in a dark room for the rest of their lives.

On January 3, 2016, one day after the terror attack on an IAF base in Pathankot, Adityanath blamed the assault on Pakistan, claiming, "The Pathankot attack has once again proved that Satan could change for the better but Pakistan cannot."

Adityanath has had a chequered relation with the BJP leadership for more than a decade. With the emergence of a separate power-base in eastern UP, he has been seeking greater power, causing further conflicts.

In December 2006, Adityanath had organised a three-day Virat Hindu Mahasammelan at Gorakhpur, during the same period when the BJP was holding its National Executive Meet in Lucknow.

The 2007 elections saw a conflict between Adityanath and the BJP leadership - he wanted more than hundred seats in this region to go to candidates selected by him, but the party leadership would not agree.

Subsequently, a compromise agreement was reached, possibly with inputs from the Rashtriya Swayamsevak Sangh, and eight of his candidates were fielded. In March 2010, Adityanath was one of several BJP MPs who started defying the party whip on Women's Reservation Bill.

About the new UP CM

Though known more for his rightist Hindu politics, it is to his credit that people in Gorakhpur, especially around the temple, hold him in high esteem irrespective of whichever caste or community they belong to. Even Muslims around the temple are given "protection" by the Yogi. Hindu-Priest-turned-Chief-Minister Yogi Adityanath comes from a Rajput family. He completed his Bachelor's Degree in Science from Uttarakhand. 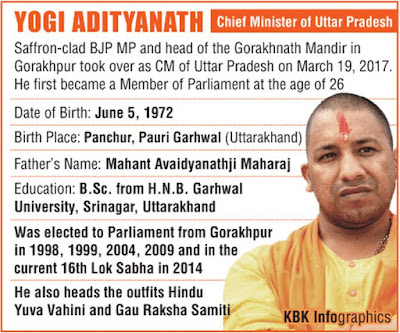 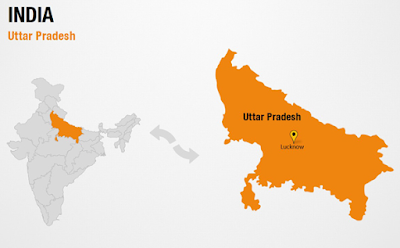