Macron Wins With Secret Plan For Islamization of France 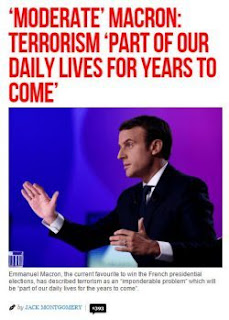 Just one day before the French election, a massive pile of emails and documents were released about the left-wing candidate Emmanuel Macron. The Macron Leaks contain secret proposals that would lead to the Islamization of France and Europe, prepared by the IM [Institut Montaigne] and Hakim El Karoui.

The document recommends the introduction of Arabic teaching to French schools, including bi-lingual classes. This is justified with the claim that Muslims are currently getting their “Arabic fix” from mosques, where they risk being radicalized. The French must accept Islam. The refusal of multiculturalism is treason.

In other words, “soft islamization” is being advocated as the remedy for “hard islamization” and that this represents a kind of de facto reward being offered to jihad violence. Jihad gets results. It leads to societies being islamised, one way or the other.

Other plans for measures to islamize France include facilitating mosque construction by making it easier to arrange finance for it and providing reserved Muslim areas in municipal cemeteries. Again this is justified by claiming that it will lead to the emergence of a “French Islam”. There is also a proposal, unfortunately not specified in detail, to finance Islam by taxing halal consumption.


The Macron leaks contain secret proposals that would lead to the islamisation of France and Europe. These are shown in a Powerpoint presentation which appears to have come from the Institut Montaigne. Harmonising education between countries on different sides of the Mediterranean is one of the key objectives.

Create a common history textbook with Italy, Spain, Morocco, Algeria, and Tunisia in order to put in historical perspective the mutual contributions and religious convergences between the two shores of the Mediterranean. Within the 3+3 framework (France, Italy, and Spain + Morocco, Algeria, and Tunisia) , we recommend the creation of a commission of historians responsible for drawing up a common history textbook. The aim of this work will be:

- to create a common base of objective historical knowledge founded on the logic of a historical "draw" [stalemate],
-  to develop a sense of belonging to a common history,
-  to reduce the fantasies of victimisation on one side as well as civilisational superiority on the other.

The document also recommends the introduction of Arabic teaching to French schools, including bi-lingual classes. This is justified by with the claim that Muslims are currently getting their "Arabic fix" from mosques, where they risk being radicalised.

(I previously noted that "soft islamisation" is being advocated as the remedy for "hard islamisation" and that this represents a kind of de facto reward being offered to jihad violence. Jihad gets results. It leads to societies being islamised, one way or the other.)

Other plans for measures to islamise France include facilitating mosque construction by making it easier to arrange finance for it and providing reserved Muslim areas in municipal cemeteries. Again this is justified by claiming that it will lead to the emergence of a "French Islam".

There is also a proposal, unfortunately not specified in detail, to finance Islam by taxing halal consumption. The email that references this presentation can be seen in picture below:

It says: "The PowerPoint study on the Islam of France (provisional and very confidential): prepared by the IM [Institut Montaigne] and Hakim El Karoui, who was introduced to you at a previous lunch."

* He has a Tunisian father and French mother.
* Members of his father's family participated in Tunisian governments at ministerial and prime ministerial level.
* He wrote a book called Réinventer l'Occident [Reinventing the West]
* He is a former director of a bank called Rothschild & Cie
* He founded an organisation called Young Mediterranean Leaders

As this Figaro article (Google English Translation) below shows, some references to these proposals have already been made in the mainstream press so it is not even that far-out in terms of the thinking of the left-wing intelligentsia in France. What wasn't known was that Macron's people were on board with it.

The recommendations of the Institut Montaigne for a "French Islam" 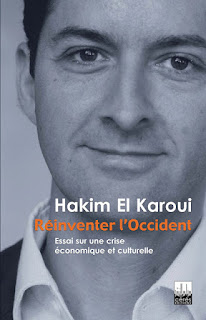 Creation of a "great imam of France", halal tax, teaching of Arabic ... The think-tank proposes a series of solutions to reform the Islam of France. We submitted these ideas to the Imam of Bordeaux Tareq Oubrou and the rector of the mosque of Paris Dalil Boubakeur.

The report "A French Islam is Possible", published by the Institut Montaigne, a liberal think-tank created by Claude Bébéar, has already given much ink, notably by the figures on the practice of Islam in France. But the 120 pages of this survey do not merely portray the French Muslims, they sketch recommendations.

For the author of the report, the entrepreneur Hakim El Karoui, a former banker at Rothschild, a member of the cabinet of Jean-Pierre Raffarin and a supporter of Ségolène Royal in 2007, the system set up in 2003 with the creation of the CFCM Its limits and is incapable of responding to the new stakes of radicalization.

The general philosophy of the report is to try to cut the Islam of France from foreign countries, especially from the Maghreb, by creating the conditions for the possibility of funding and French training.

A " ridiculous " idea for the Bordeaux imam Tareq Oubrou , who believes that financing by foreign funds is not a problem, as long as the traceability and legality of financing is proven. "We accept money from Qatar to finance football teams," he told Le Figaro. "What counts is to control activities and speeches".

The rector of the great mosque of Paris Dalil Boubakeur has the same opinion: «« I do not think it is necessary to cut off any link between the Islam of France and foreign countries.

• A halal tax to finance mosques

In order to bring Islam out of France to the guardianship of foreign states, the report advocates implementing a financing of the mosques with a levy on halal consumption, which would be perceived and centralized by a "Muslim Association for a French Islam".

It would be the only one to be able to issue a certificate of approval for the halal slaughter, instead of three mosques today, linked to foreign states. The association would also centralize the donations of the faithful, to redistribute them in the salariat of imams and the funding of places of worship.

The idea of ​​a "halal tax" to finance French Islam is not new, and has recently been taken to the right, notably by Nathalie Kosciusko-Morizet . It is far from pleasing to Muslim religious leaders. For Tareq Oubrou, this measure would be "an offense against French law which guarantees that taxation is not confessional" and "contrary to the law of 1905".

Dalil Boubakeur, whose big mosque certifies part of the halal meat, said he was also opposed to a centralization of taxes, fearing a "misappropriation of funds, which will cost money to a religion that remains the poorest in France and Suffers from a lack of resources." The halal tax, a measure that is difficult to apply

• The creation of a "great imam of France"

The Institute also proposes the election of a "great imam of France" who, like the "chief rabbi of France" or the president of the conference of bishops of France, would be charged with "expressing a doctrine Muslim society compatible with republican values ​​". This proposal has already been made by the Islamologist Malek Chebel , but also by the imam of Drancy Hassen Chalghoumi.

For Tareq Oubrou it would be "ideally" a good idea, but the Imam of Bordeaux doubts how to achieve it. Dalil Boubakeur opposed it: "I believe that Sunni Islam suppressed the Caliphate in 1922. The beauty of Islam lies precisely in its lack of a single religious authority that can interfere with religious freedom. (Any man with a burning ambition to run a death cult can start a mosque with any followers at anywhere he wants.)

• The extension of the Concordat of Alsace-Moselle to Islam

The exception to the agreement allows Alsace-Moselle to recognize and finance four cults: Catholic, Lutheran, Reformed and Jewish. The Institut Montaigne proposes to add Islam. The proposal to include Islam is often repeated: in 2006, François Grosdidier, a UMP senator from the Moselle, proposed a bill to the Assembly to that effect without success.

The rector of the great mosque of Paris Dalil Boubakeur said he was very supportive. The institute figures at 6 million euros this enlargement, which would allow the remuneration of about sixty imams and the taking over of public buildings Muslims by the public authorities.

• The development of the teaching of Arabic

To further integrate French Muslims, the Institute recommends "teaching classical Arabic in public schools to reduce the attractiveness of Arabic classes in Koranic schools". Based on an IFOP poll showing that 67% of Muslims want their children to study classical Arabic and 56% that it be taught in public school, the Institut Montaigne advocated valuing ELCO ( language teaching and Cultures of origin ) and their integration into international sections.

"I am for an Islam of France practiced by Muslims of French culture," recalls Dalil Boubakeur. "If some want to learn Arabic, why not. But frankly, that's not the priority. "

The Institute also advocates the development of religious statistics in order to better combat prejudice and discrimination, but also to "draw up a common history book with Italy, Spain, Morocco, Algeria and Tunisia, in order to put into historical perspective the mutual contributions and the religious and cultural convergences between the two shores of the Mediterranean ".

The report was received with cowardice by the official authorities, who preferred that the reform should come from the Muslims themselves. It should be noted, however, that according to the Institut Montaigne's survey, official institutions are less and less representative of French Muslims.

Only 9% say they know the CFCM. Only 16% of the Muslims interviewed feel "close" to Tareq Oubrou and Dalil Boubakeur, who are considered official and moderate personalities of the Islam of France. The most controversial Swiss preacher Tariq Ramadan is appreciated by 37% of the respondents.