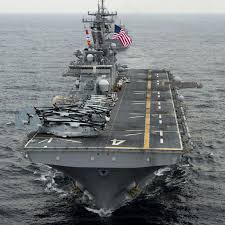 ABOARD THE USS BOXER—President Trump said the U.S. Navy downed an Iranian drone that was flying too close to a U.S. warship in the Strait of Hormuz, hours after Iranian forces said they had seized a foreign tanker, the latest in a series of incidents that have ratcheted up tensions in a vital oil shipping route.

Mr. Trump said the USS Boxer, an amphibious assault ship, took defensive action against the drone, which he said was “threatening the safety of the ship and the ship’s crew” in the Strait of Hormuz, the narrow channel leading into the Persian Gulf through which a third of the world’s seaborne oil is transported.

The drone was “immediately destroyed,” Mr. Trump said. The president called the approach by the drone the latest “of many provocative and hostile actions by Iran against vessels operating in international waters.”


Defense officials wouldn’t say how the drone was downed, but one official said it was an electronic measure. The U.S. Marine Corps within the last year has begun to deploy a system that can detect drones and jam the signal that connects them to their remotely located pilots, forcing them to crash.

Tensions are rising in the region. Earlier in the day, a Wall Street Journal reporter aboard the USS Boxer witnessed close encounters between a group of U.S. ships and the Iranian military.

The USS Boxer was one of six warships the U.S. sent through the Strait of Hormuz as a show of force designed to reassure allies on Thursday. An unarmed Iranian navy helicopter flew alongside the Boxer, yards away from the deck, before a U.S. helicopter chased it away. The commander of the Boxer, Capt. Ronald Dowdell, called the engagement “surreal.”

An Iranian vessel, came as close as 500 yards to the Boxer—the distance the U.S. Navy allows before verbally communicating to a ship not to come any closer. U.S. helicopters warned the Iranian ship against approaching the Boxer by flying between it and the U.S. warship.

Soon after, at about 10 a.m., the drone was downed, a U.S. official said. Marines on the top deck shouted that they had spotted an “unmanned aerial system,” but the drone and its downing weren’t visible to the naked eye. The Boxer convoy had launched attack helicopters into the air and they were chasing Iranian aircraft away from the vessels.

The U.S. blames Iran for attacks on tankers in recent months meant to disrupt crude exports, which Tehran has denied. Last week, Iranian boats tried to block a British-flagged tanker but were turned away by a U.K. warship. Iran shot down a U.S. drone over the Persian Gulf last month.

U.S. officials said Thursday the Pentagon is sending 500 troops to Saudi Arabia as part of a buildup to counter potential threats from Iran and its allies. The Trump administration also said it had blacklisted several companies and individuals it said helped Iran procure materials for the country’s nuclear enrichment program.

The drone downing on Thursday came after Iran’s Islamic Revolutionary Guard Corps said it had seized a tanker, ratcheting up fears that Tehran could further disrupt shipping traffic. The Guard took possession of a small vessel carrying what it said was 1 million liters of smuggled fuel near the island of Larak in the Persian Gulf on Sunday, according to a press release quoted by Iran’s state news agency, IRNA.

Iran’s Foreign Ministry said Wednesday that Iran had rescued the Riah after the vessel encountered technical difficulties and sought help while in Iranian waters on Sunday. But Iran’s state-broadcaster PressTV later aired footage it said showed a smuggling vessel being seized by Revolutionary Guard speedboats. The tanker bore the Riah’s name as well as its matriculation number and registration as a Panama-flagged vessel.

Marine Anti-Drone Buggies On USS Boxer Knocked Down "Threatening" Iranian Drone: The Pentagon says that personnel on the Wasp class amphibious assault ship USS Boxer knocked down an Iranian drone that came within a "threatening range" as the ship sailed through the volatile Strait of Hormuz.

Subsequent reports said that a U.S. Marine Corps all-terrain vehicle with an anti-drone detection and jamming system sitting on the ship's flight deck brought down the unmanned aircraft with an electronic warfare attack.

President Donald Trump was first to announce that Boxer had taken defensive action in the Strait of Hormuz during a press conference at the White House on July 18, 2019. The Pentagon subsequently released a statement regarding the incident.

The amphibious assault ship, which is carrying elements of the 11th Marine Expeditionary Unit, was sailing in a convoy at the time that also included a Harpers Ferry class dock landing ship, an Arleigh Burke class destroyer, and the expeditionary sea base USS Lewis B. Puller, a highly specialized vessel the War Zone has profiled in-depth in the past.

A Henry J. Kaiser class underway replenishment oiler was also present for at least a portion of the voyage. The first-in-class USS Harpers Ferry was likely the dock landing ship that was sailing with Boxer as that ship is presently assigned to the Boxer Amphibious Ready Group. Puller, one of the Navy's main anti-mine warfare platforms, which is capable of supporting MH-53E Sea Dragon mine-sweeping helicopters, is permanently deployed to the Middle East region.

The Pentagon's complete statement, from chief spokesperson Jonathan Hoffman, was as follows: "At approximately 10 a.m. local time, the amphibious ship USS Boxer was in international waters conducting a planned inbound transit of the Strait of Hormuz. A fixed wing unmanned aerial system (UAS) approached boxer and closed within a threatening range. The ship took defensive action against the UAS to ensure the safety of the ship and its crew." 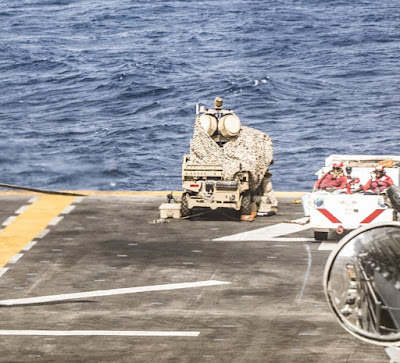 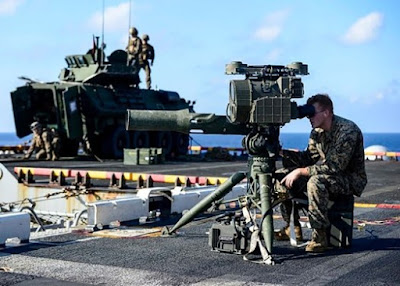 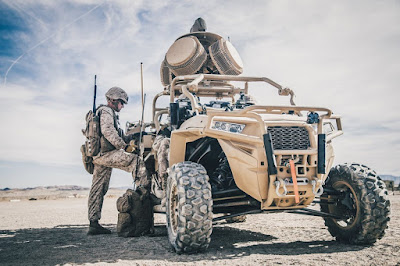 So far, Iran does not appear to have confirmed or denied the incident. Iran's Foreign Minister Mohammad Javad Zarif told reporters that he had "no information" to offer. Neither Trump nor the Pentagon has, so far, identified the drone in question. Iran operates a wide array of different fixed-wing unmanned aircraft of different sizes. Iran has armed some of these designs, but we do not know if the drone in this case appeared to be carrying any external weapons or was a kinetic weapon itself.

Even without external weapons, the drone could have presented a real threat to the Boxer and personnel on board, either by acting as a loitering munition or otherwise harassing or interfering with the ship's operations, especially the launch and recovery of any aircraft or helicopters from its flight deck.

A mass drone attack, to say nothing of one from an actual swarm of unmanned aircraft networked together, could overwhelm the defenses on even the most heavily defended ship and wreak havoc.

CNN initially reported that personnel used a "soft-kill" electronic warfare attack rather than a missile, such as the ship's RIM-116 Rolling Airframe Missiles (RAM), or a gun system, such as the Phalanx Close-in Weapon System (CIWS).

Fox News then subsequently reported that the system in question was the Marine Corps' new Light Marine Air Defense Integrated System (LMADIS). Pictures the Navy has released of the Boxer making the transit in the Strait of Hormuz already showed a specially configured 4x4 Polaris MRZR associated with LMADIS on the ship's forward flight deck.

LMADIS, which you can read about in more detail in this past widely circulated War Zone piece, consists of a pair of MRZRs, both of which are equipped with the RADA RPS-42 hemispheric air surveillance active electronically-scanned array (AESA) radar system. One them also has a CM202 sensor turret with electro-optical and infrared full-motion video cameras. The CM202 offers an additional means of positively identifying potential threats that the RPS-42s detect. 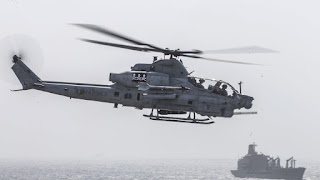 If it becomes clear that the target is hostile, Marines can then use a Modi jammer to disrupt the drone's links to its ground control station, potentially causing it to crash. The Marine's specifically developed LMADIS to respond to the ever-growing threat of small unmanned aircraft. In January 2019, USS Kearsarge, another Wasp class ship, deployed the same system as it passed through the Suez Canal.

If the electronic attack doesn't deter or destroy the unmanned aircraft down, Marines can switch to a kinetic option, such as the FIM-92 Stinger man-portable air defense system, or MANPADS. In recent years, the U.S. military has been upgrading the Stinger specifically to make it more capable against small drones. In a maritime scenario, the aforementioned point defense systems on Navy ships could also engage the drone.

Iran using drones to harass U.S. ships, as well as aircraft, in the Persian Gulf is hardly new and it has largely taken the place of the much riskier practice of doing so with small, manned boats. In 2016, Iranian forces notably flew very close to the Nimitz-class aircraft carrier USS Dwight D. Eisenhower and her associated strike group. The Iranians regularly release video from these flights, especially of major warships, such as carriers, for propaganda purposes.

But Boxer's transit through the Strait of Hormuz comes at a time of particularly high tensions between the United States and Iran. In June 2019, things took a particularly worrying turn when Iran's Islamic Revolutionary Guard Corps (IRGC) shot down a Navy RQ-4A Broad Area Maritime Surveillance Demonstrator (BAMS-D) drone flying over the Gulf of Oman. The United States almost retaliated by striking targets in Iran.

In addition, there have been a number of attacks and other incidents linked to Iran involving commercial oil tankers in the region in recent months. Earlier on July 18, 2019, the IRGC had announced that Iran had detained the Panama-flagged tanker Riah over alleged fuel smuggling.

So, it's also not surprising that, beyond the LMADIS, the pictures the Navy released also highlighted other components of the layered force protection capabilities the ship can employs while passing through these kinds of high-risk areas. One shows a Navy MH-60R Sea Hawk helicopter armed with Hellfire missiles and a 50 caliber machine gun escorting an Iranian Navy Bell 212 helicopter away from the Boxer. Another offers a good look at a Marine AH-1Z Zulu Cobra attack helicopter carrying, among other weapons, an AIM-9M Sidewinder air-to-air missile, which it could use to engage other helicopters, low-flying aircraft, or small drones.

The AH-1Z was also carrying AGM-114 Hellfire missiles as well as a pod full of laser-guided Advanced Precision Kill Weapon System II (APKWS II) 70mm rockets, all of which these helicopters could employ against swarms of small boats that might threaten the Boxer. This is in addition to the helicopter's 20mm cannon. Other pictures showed Marines on the ship's deck with small arms providing very close-in defenses.

In recent years, the Marines have also taken to strapping HMMWV and Growler light tactical vehicles, as well as LAV-25 light armored vehicles, to the decks of amphibious ships during sensitive transits to provide extra force protection with their turreted machine guns and automatic cannons. Putting TOW anti-tank guided missile launchers, which can also just provide added situational awareness thanks to their electro-optical and infrared sighting systems, up on the deck has also become increasingly common.

When it comes to LMADIS, the system represents a stepping stone toward a more robust array of short-range air defense options that the Navy and Marines, as well as the U.S. Army and Air Force, are working on now, including various directed energy weapons, such as lasers and high-power microwave beams. But, as one can see from the Boxer's encounter with the Iranian drone in the Strait of Hormuz, this capability to defeat lower-end threats is already extremely valuable. 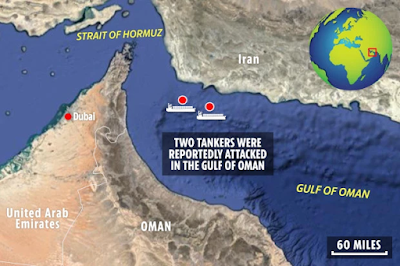