Anger soared in Hong Kong on Monday over a vicious assault on pro-democracy protesters by suspected triad gangsters that left dozens wounded, a dramatic escalation of the political turmoil plaguing the Chinese city.

The financial hub's roiling unrest took a dark turn late Sunday when gangs of men -- most wearing white T-shirts and carrying bats, sticks and metal poles -- set upon anti-government demonstrators as they returned from another huge march earlier that day.

Footage broadcast live on Facebook showed people screaming as the men beat multiple protesters and journalists in Yuen Long station and inside subway trains, leaving pools of blood on the floor. Hospital authorities said 45 people were wounded in the attack, with one man in critical condition and five others with serious injuries.

Critics rounded on the city's embattled police force, accusing officers of taking more than an hour to reach the site and failing to arrest the armed assailants who stayed in the streets around the station into Monday morning. Some men in white shirts were later filmed leaving the scene in cars with Chinese mainland number plates.


Shame on the government

Lam Cheuk-ting, a pro-democracy lawmaker, was one of those wounded in the melee, sustaining lacerations to his face and arms. He criticised police for their response and accused "triad members" of being behind the attacks.

"Their very barbaric and violent acts have already completely violated the bottom line of Hong Kong's civilised society," he told reporters early Monday. Furious fellow pro-democracy lawmakers held a press conference on Monday where they accused the city's pro-Beijing leaders of turning a blind eye to the attacks.

"Definitely our manpower is stretched," he told reporters, describing any suggestion police colluded with triads as a "smear" and adding his officers would pursue the attackers. The clashes have ratcheted up concern that the city's feared triad gangs are wading into the political conflict.

Yuen Long lies in the New Territories near the Chinese border where the criminal gangs and staunchly pro-Beijing rural committees remain influential. Similar assaults by pro-government vigilantes against demonstrators during the 2014 "Umbrella Movement" protests were blamed on triads. 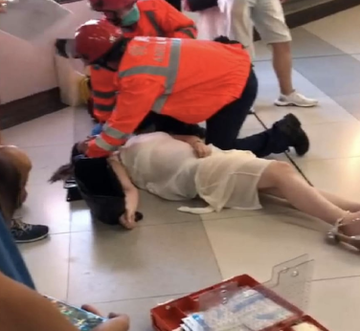 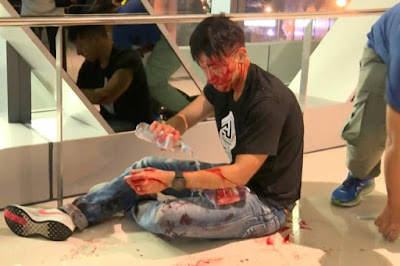 Hong Kong has been plunged into its worst crisis in recent history by weeks of marches and sporadic violent confrontations between police and pockets of hardcore protesters. The initial protests were sparked by a now-suspended bill that would have allowed extraditions to mainland China, but they have since evolved into a wider movement calling for democratic reforms, universal suffrage and a halt to sliding freedoms in the semi-autonomous territory.

The city's parliament was trashed by protesters earlier this month, as Beijing's authority faces its most serious challenge since Hong Kong was handed back to China in 1997. As the mob rampage unfolded in Yuen Long police were simultaneously battling hardcore pro-democracy protesters in the middle of the city's commercial district.

Riot officers fired tear gas and rubber bullets at protesters, hours after China's Hong Kong Liaison Office was daubed with eggs and graffiti in a vivid rebuke to Beijing's rule. Wang Zhimin, the head of the office, blasted the protesters on Monday, saying they had insulted "all Chinese people" as he called on Hong Kong's government to pursue the "rioters".

Hong Kong's leader Carrie Lam condemned both the targeting of the Liaison Office and the pro-government mobsters saying the scenes "outraged the whole city". "We absolutely do not condone those sort of violent acts," she told reporters.

Earlier on Sunday, another peaceful anti-government march had made its way through the city -- the seventh weekend in a row that residents have come out en masse. Yet the huge protests have done little to persuade Lam -- or Beijing -- to change tack on the hub's future.

Under the 1997 handover deal with Britain, China promised to allow Hong Kong to keep key liberties such as its independent judiciary and freedom of speech. But many say those provisions are already being curtailed, citing the disappearance into mainland custody of dissident booksellers, the disqualification of prominent politicians and the jailing of pro-democracy protest leaders.

Authorities have also resisted calls for the city's leader to be directly elected by the people. Protesters have vowed to keep their movement going until their core demands are met. 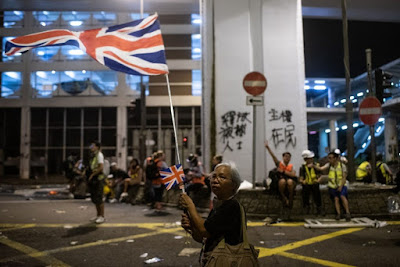 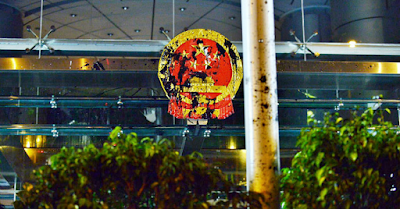 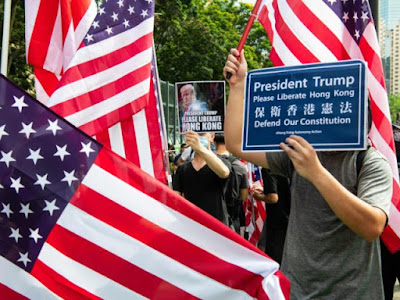