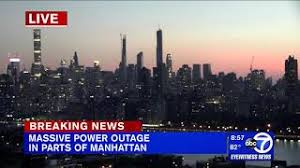 NEW YORK, July 13 (Reuters) - A blackout hit more than 40,000 people in New York City's Manhattan borough on Saturday evening, plunging subway stations and shops into darkness and sending thousands of people into the streets after an apparent transformer explosion on the Upper West Side, officials said.

A Reuters witness in the area reported hearing an explosion at about 7 p.m. (2300 GMT), and a New York City Fire Department spokesman said firefighters were on the scene of a transformer fire.

"Members are responding to reports of numerous stuck elevators that are occupied, but there are currently no patients reported," the department said on Twitter. It said the outage extended from Fifth Avenue west to the Hudson River, and from the west 40s north to 72nd Street. The Con Edison utility said it was working to restore power to 42,000 customers and would provide updates as it got them.


Mayor Bill de Blasio told CNN said he had spoken with the police commissioner and the deputy commissioner who handles counterterrorism. "From what we're seeing at this moment, this is simply a mechanical problem and one, again, that sounds like it is addressable in a reasonable period of time," de Blasio said.

The city's subway system said it was working with the utility and that the outage was affecting Midtown and the Upper West Side. "Several stations are currently without power and are being bypassed by all trains," it posted on Twitter.

Some Broadway theaters were not letting in patrons, and the streets filled with ticket holders. In an attempt to cheer customers, the cast from the musical "Come From Away" performed a song in front of the stage door.

City Council Speaker Corey Johnson wrote on Twitter that the ConEd substation on the West Side had a "major disturbance" and that the utility was working on fixing it. With some stations and traffic lights dark, many residents and visitors alike took to the streets and walked, according to social media posts, many of which had the hashtag #blackoutnyc.

Jeff O'Malley told Reuters he was stuck in a subway car for more than an hour. "We were stuck for about 75 minutes," said the 57-year-old consultant. "It's completely dark (in the station); people were coming up using their flashlights on their phones."

The outage occurred on the 42nd anniversary of a New York blackout that crippled nearly the entire city during a heat wave on July 13, 1977. Power was not restored until the next day. 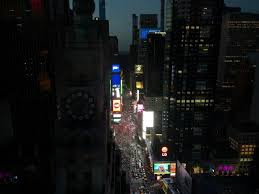