(Kristina Wong article from the BREITBART NEWS on 04 July 2019.) 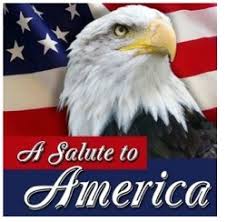 President Donald Trump noted the “great crowd” that attended the Salute to America celebration honoring the United States military on the Fourth of July. “A great crowd of tremendous Patriots this evening, all the way back to the Washington Monument,” he tweeted.

Attendees with tickets were admitted into the area around the Lincoln Memorial and half-way down the reflecting pool around 3 p.m. ET. Heavy rain commenced around 3:30 p.m. ET. The rain lasted for approximately two hours before abating before the celebration began at 6:30 p.m. ET. Despite the rain — the entire area around the reflecting pool was packed by the time the celebration started.

Donald J. Trump Tweeted:  A great crowd of tremendous Patriots this evening, all the way back to the Washington Monument!  The massive crowd size was also noted by others on social media. Boris Epshteyn Tweeted: Huge crowd at Lincoln Memorial for Salute to America celebration organized by DonaldTrump!
Viewers of the event on C-SPAN also commented on how the network was showing the large crowd, with one viewer posting a screenshot shortly after the event began: Denise Madeline tweeted: Besides FoxNews and OAN , C-SPAN only media showing the HUGE crowd in DC at President Trump’s 4th of July “Salute to America’s” speech. Even the pouring rain could not hinder the massive crowd stretching from the Lincoln Memorial to the Washington Memorial and beyond.

The US President has paid tribute to the American spirit during a key Independence Day address. Donald Trump is delivering the 'Salute to America', after a slight weather delay in Washington.


Meantime, there have been violent clashes outside the White House which has seen protestors arrested after setting fire to two American flags. Secret Service officers quickly moved in on the group and extinguished the flames. 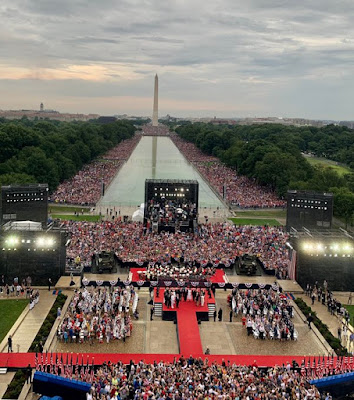 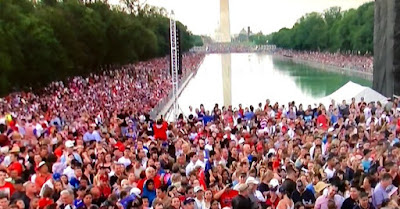 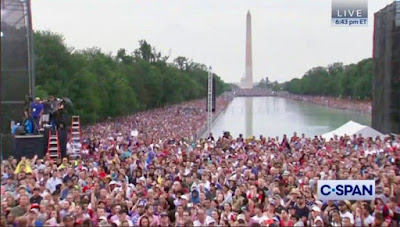 Thousands braved the pouring rain to arrive in downtown DC for Independence Day celebrations. The all-day “Salute to America” event prompted controversy, due to President Donald Trump’s insistence on a show of military might and a speech in the evening.

A downpour across the city didn’t stop a series of military flyovers from wowing the crowds. Thousands of people, including both supporters and opponents of President Donald Trump, turned up for Independence Day celebrations in downtown Washington, DC.

The event included a show of military might, including tanks armoured vehicles stationed outside the Lincoln Memorial, and military plane flyovers. Trump himself spoke to the crowds Thursday evening.

The event, titled “A Salute to America,” drew both praise and heavy condemnation in advance. Some spectators were excited to see the military flaunt its equipment and Trump give a speech, while others accused the president of co-opting what was supposed to be a holiday celebrating America’s history and national unity.

A downpour across the city drenched attendees, and prompted questions over whether turnout would be high and whether flyovers would still occur. But revelers and protesters still turned up despite the rain, covering themselves in ponchos and plastic bags, or toting umbrellas. 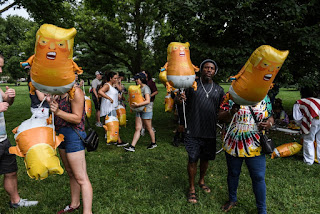 The military showed off its might, including two 25-ton Bradley Fighting Vehicles stationed outside the entrance of the Lincoln Memorial. Two 70-ton M1A2 Abrams tanks and an M88A2 HERCULES Armoured Recovery Vehicle also made appearances.

Meanwhile, protesters with the organisation Codepink handed out small, foil balloons resembling Trump in a diaper.

All the bells and whistles have prompted local officials to complain about the costs of Trump’s extravagant festivities, but the Trump administration has refused to detail how much the event will cost taxpayers.

The National Park Service, however, reportedly diverted nearly $US2.5 million to pay for Thursday’s celebrations. The money would otherwise have gone towards improving parks across the country. 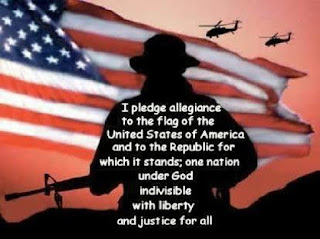 Though the event was free and any member of the public could attend, the Lincoln Memorial was sectioned off by a chainlink fence for VIPs who had purchased tickets to Trump’s speech. But privately, Trump’s aides reportedly worried about empty seats, and rushed in the previous days to sell tickets and ramp up participation.

Trump spoke at the National Mall around 6:30, becoming the first president in nearly 70 years to do so on Independence Day. His promise of an Air Force One flyover was fulfilled, and stunned the crowds.

Trump’s speech included patriotic themes and platitudes, as well as highlights from America’s military history. He spoke to the crowd while protected by sheets of bulletproof glass drenched in rainwater.


Next came a series of elaborate military flyovers from each branch: the Coast Guard, the Air Force, the Navy, the Marines, and the Army. The show — and Trump’s speech — wrapped up with a flyover by the Blue Angels. 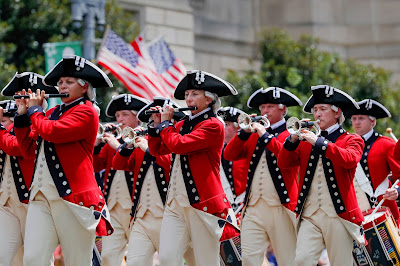 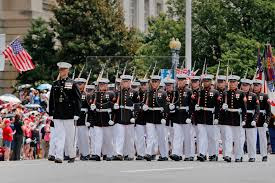 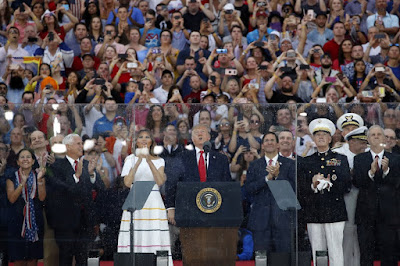 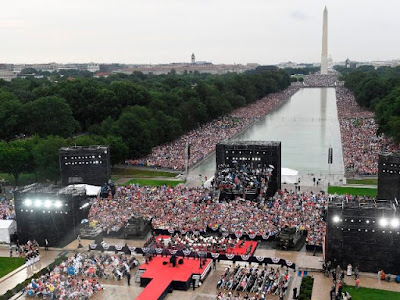