(Karen Cacy’s article from The COMMUNITY DIGITAL NEWS on 25 February 2019.) 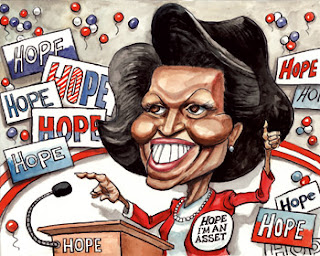 COLORADO SPRINGS: The circus is in town. No, not that one. The Democrat presidential candidates. Free stuff! Another bite of the socialist apple, this time with “the right” people in charge. Phasing out airplanes and cars. Moreover, cows.

For anyone not in school or university in the past twenty years, i.e., those not socialist-indoctrinated, the current pack of incompetent, judgmental, arrogant candidates don’t seem convincingly prepared for Central Casting’s democrat take-down of the White House, come 2020.

Looking at the present field, barring stuffed ballot boxes and many more dead people voting, there ain’t no way. Perhaps, however, through it all, standing behind the curtain, might be the penultimate presidential democrat for the times: the vegetable gardener herself, Michelle Obama.


A media darling, she regularly graces magazine covers (Melania, who?) and shows up at all the “shows” to an adoring and loving (democrat) public. Like Melania (although never reported,) Michelle is fashionably dressed on a tall frame meant for wearing designer clothing. Like Trump (although never reported,) she has two beautiful offspring. Also, unlike President Trump, she has the white column guy himself, Barry Obama. What a “First Man” would he make!

Michelle, for now, is watching the show from a position off-stage. The candidates’ shenanigans have been so bizarre, and over the top, one might be forgiven for thinking the current batch of Democratic presidential candidates are in cahoots with the Democrat National Committee to an eventual third Obama candidacy.

Should Mrs. Obama choose to run, would any of her Democrat opponents possess her media-tested poise, image, and name recognition? Did current presidential candidate Amy Klobuchar, for instance once say, “It’s hard to hate up close?” Not even.

Straight from her vitriolic, family-destroying performance at the Brett Kavanaugh hearing, Amy Klobuchar is an old-enough presidential “contender.” She announced her candidacy in a raging snow-storm. A poster woman for hypocrisy, Klobuchar has been painted in the media as a terrible boss, with high staff turnover. Lacking a fork recently she proceeded to eat her egg salad with a comb.

The icky, revealing part, however, was when afterward, she asked a staff member to clean the glop from her comb. Remember when President Carter carried his bags on and off Air Force One in a gesture of humility? Even if it was fake posturing, it was good fake posturing. Better at least than making a staffer clean old egg off a fork.

Alternatively, how about candidate Elizabeth Warren? Was it she who said, “I love vets and caregivers?” Once again, no. The self-absorbed Warren, while Michelle was visiting schools and promoting healthy eating for young people, was busily fending off DNA tests of her Indian heritage claim.

It was Elizabeth Warren, not her fellow Harvard graduate, Michelle Obama, who climbed the backs of native Americans to receive her diversity benefits from academia. Today, “Pocahontas” drinks beer in her kitchen and thanks her husband for being there. Where else would he be? He lives there. She wants us to understand; she’s just like us.

Michelle, the mother of two daughters, often said, “Girls run the world.” On her recent book tour, the former first lady was a hit. The warm recounting of her life enjoyed healthy book sales, proving that the former First Lady may still be in demand by the general public.

Professor Joe Biden? As we plumb the field of Democrat candidates, “Old Joe” Biden – “Won’t you stand up; ah gee, I’m sorry. Then, we’ll all stand up.” – Comes to mind. He’s, unfortunately, the “old white man,” in a still diversity-conscious era. Then there’s young Cory Booker of New Jersey. However, he’s already had his “Spartacus Moment.”

It may be becoming clear, that these and other democrat performers are struggling to be viable in today’s world. Standing beside Queen Michelle Obama, one wonders how wide would be the chasm separating these professional politicians and the most famous “housewife” of the age. 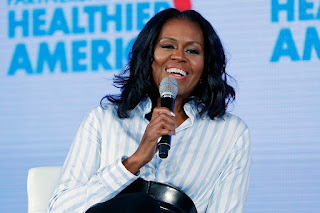 For Michelle Obama, the time has passed quickly since her White House years. She and her husband were affiliated with the former Democrat party, in a time when the very word “socialism” was verboten. Today’s congressional youngsters appear to be following the Bernie Sanders pied piper instead. Socialism is an open option for them.

Not running for president yet – she’s still too young – is Alexandria Ocasio Cortez, an excellent example of why the young should not be president. Can anyone imagine Michelle Obama storming Nancy Pelosi’s office with picketers in hand?

Consider the kid, Rep. Alexandria Ocasio Cortez, or as Rush Limbaugh likes to call her, “Occasional Cortex, OC.” The pretty young, doe-eyed newcomer knows her marketing well. Since her arrival as a congressman, she arguably is working to be the most extreme and the most iconoclastic member of Congress.

She began her tenure by picketing House Leader Pelosi’s congressional office with a not-so-subliminal message, “Move over, I’m here now.” Nothing like insulting the Speaker of the House, third in line to the U.S. presidency!

A declared Socialist, OC is Washington’s new “it” girl. Clothed in expensive clothing and paying $5,000 a month for her DC digs, and despite her obsession with “the poor,” she is sure of herself as she reads from the Marxist playbook. Was she ever taught the Bill of Rights in school?

As OC spews her uninformed, but openly socialistic views, older democrats, progressives and independents may want to slow down a bit. That’s where a potential President Michelle Obama might enter, Stage Left.

Recalling eight years of President Obama’s cool, Indonesian brand of “progressivism,” might people still hunger for a third Obama term? This time out, might voters opt for his African American wife over “the professionals?” If “First Black President” was a good slogan, won’t “First Black Woman President” sound even better? Just saying. 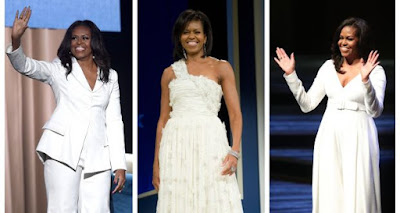 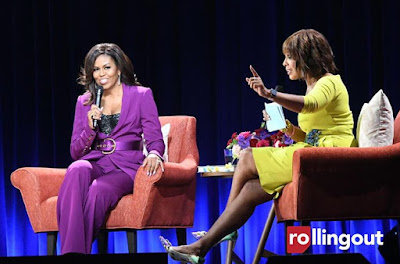