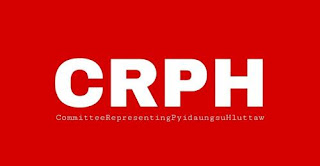 Myanmar's elected parliamentarians are openly challenging the country's coup leaders by declaring a parallel civilian government in the next few days. The timing corresponds with the official end of the current elected government of Aung San Suu Kyi.

They are also planning to establish a parallel administration throughout the country, challenging the military's coercive structures. One of the key intentions is to challenge the military's legitimacy and credibility internationally and make the country ungovernable.

"We're almost there," Zin Mar Aung, a National League for Democracy (NLD) MP, who is the acting foreign minister in the CRPH or Committee Representing the Pyidaungsu Hluttaw (the national parliament). "An interim unity government of Myanmar will be formed and launched around the end of the month."

"Although the NLD is dominant amongst the elected parliamentarians, it is not going to be a one-party based government. It's a coalition around a vision of democracy: a national federal, democratic state," she said. The CRPH, which consists mainly of MPs elected in last year's election, has been negotiating with ethnic armed groups, political parties, and protest committees since it was formed after the military seized power on Feb 1.

Already the CRPH has assigned several acting ministers, including an acting Vice President, Mahn Win Khaing Than, a Karen who was the speaker of the Upper House in the previous parliament. But the cabinet list will be expanded soon, and acting ministers appointed from other political parties, according to Zin Mar Aung. The CPRH is also already issuing edicts, directly challenging the military government's authority.

Around the same time as the interim government is announced, the CRPH plans to launch a new provisional constitution, based on federal, democratic principles. Discussions are still ongoing, she said. These involve many of the other political parties -- especially the ethnic parties -- members of the civil disobedience movement, civil society and ethnic communities as well as representatives of several ethnic rebel armies that have signed a national ceasefire agreement (NCA) with the previous quasi-military regime of President Thein Sein, but which Ms Suu Kyi and the NLD government accepted after they convincingly won the 2015 general elections. 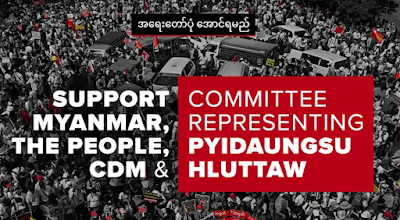 Several versions of a new constitution -- which will replace the pro-military constitution of 2008 -- are under discussion, said the acting foreign minister. And the final details are being ironed out, she said. "We're discussing how we can work collectively in a situation like this. We are trying to have one united voice," said Zin Mar Aung. But the conditions they find themselves in -- most in hiding, accused by the military authorities of treason, which carries sentences from 20 years in jail sentence to execution, communicating virtually and hampered by the constant internet restrictions, makes their work even more difficult.

Among those involved in the talks are the Karen National Union, the Restoration Council for Shan State (RCSS), and the Kachin Independence Army, as well as other groups that have signed the NCA, she said. "There are still some suspicions left from the past. We are working together to erase them and build trust. We have slowly begun to establish some common ground now," she said.

But there is obviously a long way to go: in an interview, the chairman of the RCSS and a signature to the NCA told the Bangkok Post that they offered only guarded support for the CRPH. "We don't recognise the CRPH at the moment -- we are talking, we are talking -- so there is informal recognition," said Yawk Serk. But on one issue they do see eye-to eye: the military cannot be allowed to go unpunished for their "crimes against humanity".

"The unity of Myanmar has never greater, and it was never needed so much as now," Dr Sa Sa, the CRPH's special envoy to the UN and the international community, told the Bangkok Post in a digital interview. "We have never seen the unity we have now -- this is the first time we see the power of the unity amongst the doctors, nurses, engineers, teachers, the students, the workers … all committed, very powerful and irresistible."

Although questions remain about the credibility, authority and viability of the CRPH, there is no doubt it has now given an effective voice to the protests and the anti-coup movement.

"The CRPH is taking most of the necessary steps to form a parallel government and create a path to overthrow the military government," said Myo Min, a young man living in Yangon. "They are forming their own local administration and building foreign relationships that could be a threat to the military government's sustainability."

"On the ground, in the streets and in the community the CRPH is universally recognised as offering the kind of leadership that didn't exist initially," said prominent Myanmar businessman, Zaw Naing -- Myanmar Technologies CEO.

The CRPH's main task is working out a roadmap for the return to democracy and how to maintain the movement's momentum several members of the CRPH told the Bangkok Post. At the same time the movement is committed to make it as difficult as possible for the military to run the country: cutting off their resources -- by boycotting their firms and those of their family and children; urging companies not to pay taxes; by bringing the administration to a standstill -- encouraging banks, hospitals, schools and shops not to open; and to delegitimise them in every way.

The CRPH and the civil disobedience movement are trying to secure the future of Myanmar, according to a young activist and NLD member, Alex Aung Khant. "They have witnessed how fragile democracy is, how fragile peace is, especially in the face of the brutal and barbaric nature of the Tatmadaw… and that it is now a fight for survival, a fight for their very existence, and a fight for the future for their children and the next generations," he said. 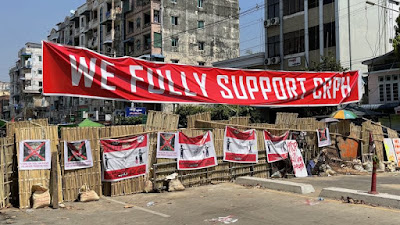 After the formal announcement of the parallel unity government, all 14 states and regions will form their own equivalent CRPH -- the YCRPH and MCRPH for Yangon and Mandalay regions have already been formed. Then the administrative structures will be developed down to district and ward level. They are already issuing edicts, after the initial parliamentary sessions on Zoom. In essence they are setting up an alternative administrative structure.

"We are fighting for a federal democratic state that will ensure a prosperous Myanmar in the future," said the Yangon parliament member Bo Bo Oo, who is also member of the regional committee, YCRP. "If people lose this time, generation after generation will suffer for decades to come: we have no choice, we must fight till the end, we must defeat this terrorist military coup council," he told the Bangkok Post.

But many in Myanmar's ethnic community remain suspicious of the CRPH's unanimous and enthusiastic support for a federal state. The NLD does not enjoy a good relationship with the country's ethnic communities as the party chose to side with the Tatmadaw and neglected ethnic groups' key demand of "Federal Democracy" in the past. "I remain unsure that the NLD will see eye-to-eye with the CRPH in the future," said Yaung Htang, a young Kachin lad from Lashio in Shan state.

"To work towards a federal union means we have to work towards establishing a federal army, which must be guided by ethical standards," Zin Mar Aung told the Bangkok Post.

But the CRPH's campaign to draw up a federal, democratic constitution is gathering momentum and support from the ethic political parties, the ethnic communities the ethnic armed organisations. Many are keen to see the discussion on federalism also include the formation of a federal army. They feel it has been made essential and possible because of the military's brutality. "It is now possible to contemplate a federal army," said a young Karen researcher, Shine Ko Ko Lwin.

"But the federal army must be rooted in a federal system," he said. "It's not just fighting all together: a federal system must be well managed, including a political system, a security, policy, and an agreement on how to implement this system. While it's definitely a good idea, talking is essential but understanding what is meant by a federal will take time."

"The CRPH-led government is seeking support to help restore democracy to Burma [Myanmar's previous name]," said Alex Aung Khant.
"All democratic governments need to heed this call -- and it shouldn't be difficult. Ambassador Kyaw Moe Tun's courageous effort at the UN should be enough to compel governments to follow his appeal and recognise the CRPH as the legitimate government."

(Larry Jagan is a specialist on Myanmar and a former BBC World Service News editor for the region.)

1 All ethnic people living in the union A strong need is a federal democratic nation that gives full assurance of justice, equality, freedom and rights to fundamental democracy.

5 So the Union Parliamentary Representative Committee announced that the Constitution (2008) will be cancelled today March 31, 2021.

Brave youths of Gen-Z fighting the armed cops with their water bottles.
Posted by Hla Oo at 11:32 AM