According to the New Strait Times, Malaysia's Defence Minister, Hishammuddin Hussein has requested that the US share information obtained from the Pine Gap base near Alice Springs.

The Malay daily referred to Pine gap as a "super-secret" installation in Australia's dry and barren heartland, and claimed that the MH370 investigation team is awaiting access to the "big radar picture" in order to pinpoint the final movements of the missing passenger jet.


“Although [the Defence Minister] did not mention the two facilities by name, the New Straits Times believes he was alluding to the Pine Gap and Jindalee facilities,” the newspaper said.

US spy satellites monitored in Australia's heartland could provide crucial information in the investigation into the missing Malaysia Airlines flight MH370 - but the information is being withheld. Australia's powerful military radar, the Jindalee Operational Radar Network (JORN), can reportedly detect movements across 37,000 square kilometres.

While Australia releases little information about the system, Foreign Minister Julie Bishop said on Monday that all of Australia's defence intelligence of relevance to the MH370 investigation "has been and will continue to be passed on to Malaysian authorities."

The latest development comes as authorities continue to ask for potentially sensitive radar and satellite data from a number of countries in an attempt to narrow down search area that currently reaches over 2.4 million square nautical miles.

For the past days, Hishammuddin has openly and publicly asked countries to provide sensitive data from their satellites, with a specific focus on the radar data of the US, France and China.

While he has conceded that information from military-use satellites is not usually shared on the grounds of national security, the Defence Minister reiterated that the search for the missing Boeing 777-200 is "above our national security".

“Our focus is on four tasks: gathering information from satellite surveillance, analysis of surveillance radar data, increasing air and surface assets and increasing the number of technical and subject matter experts,” Hishammuddin said last night. “On satellite surveillance, I cannot disclose who has what capability but I can confirm we have contacted every relevant country that has access to satellite data,” he said.
Previous Missing planes cast shadow on flight 370

As Australia searches for Malaysia Airlines flight MH370 in the Indian Ocean, many missing planes have simply never been found. Some are believed to have crashed into mountains or water in bad weather, while others simply vanished. All remain lost, despite the best efforts of Australian search teams.

The most famous is the Lady Southern Cross, a Altair monoplane, which disappeared over the Andaman Sea, between India and Singapore, in the early hours of November 8, 1935. Australian aviation pioneer Sir Charles Kingsford Smith and co-pilot Tommy Perthybridge, who were trying to break the England-to-Australia speed record, were lost.

Although a group of fisherman in Myanmar found the plane's wheel 18 months later, years of searching failed to find any other part of the Lady Southern Cross. 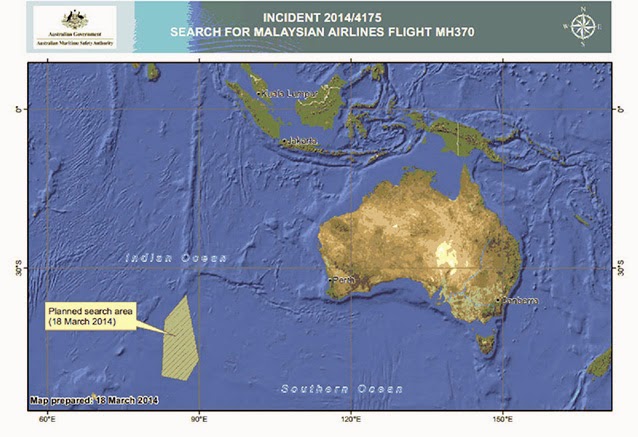 Seven years earlier, New Zealand aviators Lieutenant John Moncrieff and Captain George Hood vanished while attempting the first trans-Tasman crossing. About 12 hours into the flight, and within 300 kilometres of New Zealand, signals from the plane ceased. Despite searches, Moncrieff, Hood and their plane had vanished without a trace.


Perhaps the strangest disappearance involved pilot and UFO enthusiast Frederick Valentich in October 1978. About halfway into Valentich's flight aboard a Cessna from Melbourne to King Island he reported seeing a strange aircraft above him, but Melbourne air traffic controllers said no other aircraft were in his area.

Minutes later he made another a strange call to base. "Melbourne, that strange aircraft is hovering on top of me again," Valentich said. "It is hovering and it's not an aircraft." Valentich and his plane disappeared and a four-day search of Bass Strait turned up nothing. A cowl flap from the plane was found near Cape Otway five years later, but despite an official investigation no one knows what really happened.

Planes vanishing over water is one thing, but one plane has been lost somewhere in NSW for almost 33 years. Pilot Michael Hutchins was flying over the Barrington Tops National Park with four passengers when his Cessna went missing in August 1981.

The weather was extremely cold with howling winds and Hutchins told air traffic controllers the plane had picked up "a fair amount of ice" over the park's mountain ranges. In his last transmission Hutchins told the operator the Cessna was "at 5000 (feet)".

Light planes disappear from time to time, but in the modern age of globalised connectivity it's eerie and unprecedented that an entire airliner, with 239 people aboard, could vanish without a trace.
Related posts at following links:
Malaysian Airlines' MH370 Crashed in Burma Waters
Ten Reasons Why MH370's Northern Route Fits The Facts
Posted by Hla Oo at 11:05 AM