Light-frigate Anawyahtar UMS-771 had successfully test-fired one of its Chinese-made surface-to-surface anti-ship guided missiles in Bay of Bengal on March-1. Anawyahtar was designed and built at Rangoon Naval Dockyards by Burma Navy and commissioned on September 7, 2000.

It was the Flag-ship of Burma Navy for 8 long years before the locally-made Frigate Aung Zeya (F-11) was built and commissioned in 2008. Anawyahtar’s first captain was Lt. Colonel Thet Swe who is now the Naval Chief-of-staff of Burma’s Armed Forces.


Originally built as a Corvette the Anawyahtar (771) has been upgraded to a light-frigate by fitting new electronic systems, radars, weapon systems, and anti-ship guided missile systems all locally made except the Chinese missiles.

On March-1 this year Burmese naval technicians and weapon experts successfully test fired a Chinese-made anti-ship guided missile at an OTH (Over-the-Horizon) target. Burma Navy emphasized the fact that Anawyahtar’s missile launcher and firing system and all electronics except the missile was developed locally in Burma.

The successful test firing was closely supervised by Genral Thet Swe the Burma Navy Chief himself on board the light-frigate Anawyahtar, announced Burma Navy on March-6. Burma Navy also announced the possibility of a large-scale naval exercise around the coming 69th Armed Forces Day on March-27.


The test firing of anti-ship missile by Burmese Navy was the direct response to Bangladesh Navy’s regular OTH test firings of similar C-802 Chinese-made anti-ship cruise missiles in the Bay of Bengal since 2008. 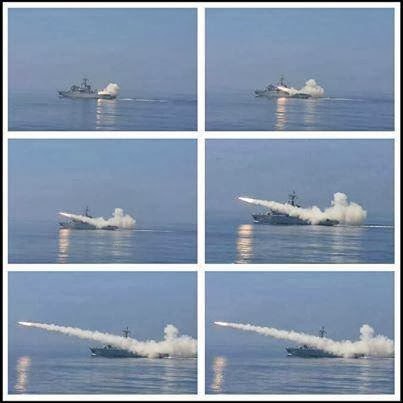