(Partly based on news articles and photos from Shin Wirathu’s Blog on March 2, 2014.)

The Insein Ywarma Abbott is the leader of the loosely-formed 9-6-9 Group of nationalist-Buddhist monks and also the venerable Chairman of nationwide Ah-Myo-Zount (The Protectors of Burmese Race and Buddhist Religion) Organization.

Aung San Suu Kyi and her opposition party NLD (National League for Democracy) have now realized the most crucial fact that without the wholehearted support of nationalist-Buddhist monks widely known as the 9-6-9 monks she would never achieve the expected landslide victory in coming 2015 General Elections and even if her party won a clear majority in 2015 she would never become the President because of that Section 59-F of Burma's 2008 Constitutuion.

Burma’s powerful nationalist-Buddhist monks have been waging the years-long fight for their proposed Ah-Myo-Zount Act which will basically ban Muslim men marrying Buddhist women and girls in Burma to become a law. But Aung San Suu Kyi and her left-leaning Socialist Party NLD have been doggedly refusing to initiate the Act for a couple of years now.

They are also refusing to vote for the act even if some other party or President Thein Sein himself initiates the Ah-MYo-Zount Act and naturally the Nationalist-Buddhist monks have been furious at her and NLD.

But the monks have other powerful connections in Burmese Parliament and the second-largest opposition party NDF (National Democratic Force) has been cooperating fully with Shin Wirathu-led 969 monks to bring up the Ah-Myo-Zount Act in the Union Parliament. The 969 monks also have the tacit support of Thein Sein's Government and Min Aung Hlaing's Burma Army.

Meanwhile Aung San Suu Kyi has been waging her seemingly-losing battle to amend Burma’s 2008 Constitution’s Section 59-F so that she would become the President of Burma if her NLD won the coming 2015 General Elections.

But the substantial public opposition to her fight has been intensified lately so much that there even were violent scuffles between her supporters and the monks-led public at every NLD rally to drum up grassroots support to amend Section 59-F.

Making the matters worse for Aung San Suu Kyi and her NLD was the significant tactical move the President Thein Sein did make on February-25. He sent the presidential letter asking the Speaker Shwe Mann of Union Parliament to urgently consider the four draft-laws of Ah-Myo-Zount Act strongly proposed by the Nationalist-Buddhist monks.

The four proposed laws initiated by the nationalist-Buddhist monks and now being pushed by President Thein Sein are: 1) the Religious Conversion Act to stop the force-conversions of Buddhist women and girls to Islam by marriage, 2) the Marriage Act to ban the marriages between a Muslim man and a Buddhist female, 3) the Monogamy Act to outlaw Muslim Polygamy, and 4) the Population Control Act to stop Muslims’ rabid breeding.

In his letter President Thein Sien had referred to the public petition signed by 1,335,600 citizens as the overwhelming grassroot support for the proposed Ah-Myo-Zount laws and urged the Union Parliament to act in urgency as the single most important legislative act. 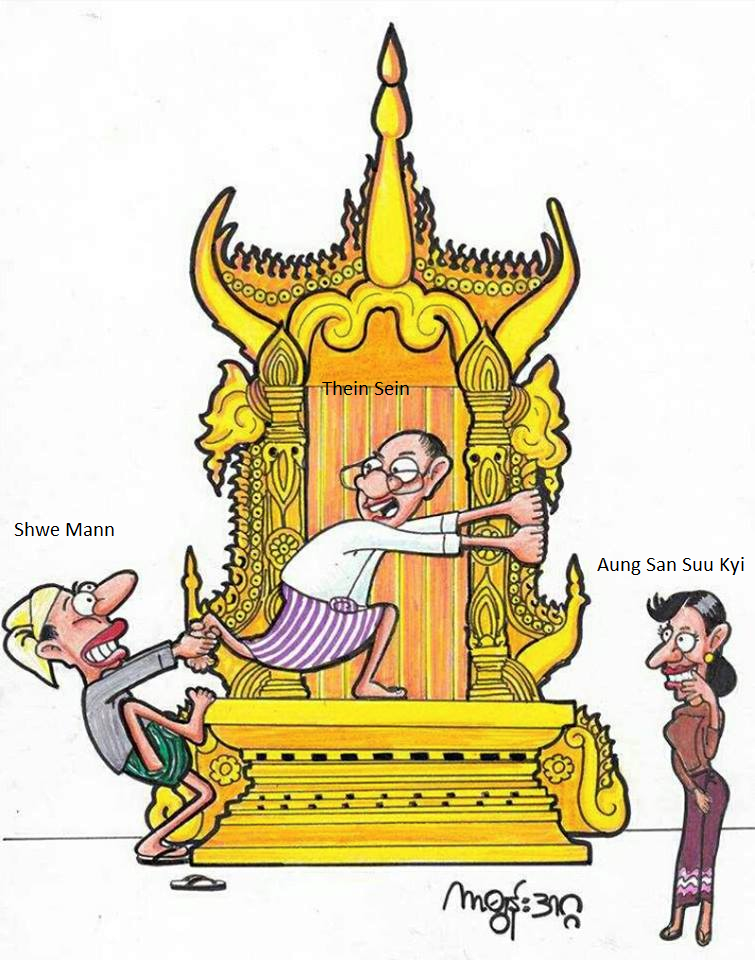 Union Parliament’s Speaker Shwe Mann a former army general but now an astute politician immediately took an action and sent the Presidential letter back officially to the Union Government so that relevant ministries can write the four draft laws.

Clearly trapped between her two potential rivals for 2015 presidency what else our World famous Nobel Laureate Aung San Suu Kyi could have done to re-outsmart both of them?

Obviously she had now eaten a humble pie and publicly attended, as her very first time, the grand birthday celebration of the venerable Abbott of Insein Ywarma Monastery, the leader of the association of nationalist-Buddhist monks, and the venerable Chairman of nationwide Ah-Myo-Zount (The Protectors of Burmese Race and Buddhist Religion) Organization.
The Grand Birthday Celebration for Chief Ah-Myo-Zount Monk

The grand Diamond-Jubilee Birthday Celebration of the Chief-Abbott of Insein Ywarma Monastery held at 9:00 am on March-2 was attended by Myanmar Sanghs Naryaka Sayardaws, Ti-pi-da-ka Sayardaws (Abbotts), Ah-myo-zount’s Chief Monks from all States and Divisions, Aung San Suu Kyi the NLD Chairman, Shin Wairathu, Minister San Sint of the Ministry of Religion, and thousands of distinguished guests.

Both President Thein Sein and Parliament-Speaker Shwe Mann sent their congratulatory-birthday-felicitations and they were read at the ceremony by Myizima-Gone-Yee Sayadaw Shin Kawwida. The birthday celebrant Abbott then acknowledged the attendance of ASSK.

The Chief-Abbott also remarked that he will be expecting the priceless present of promulgated Ah-myo-zount Act from The President and the Speaker and NLD Chairman for his 76th Birthday next year. 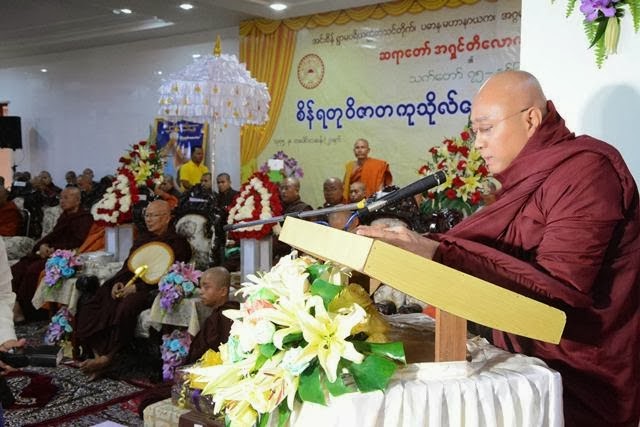 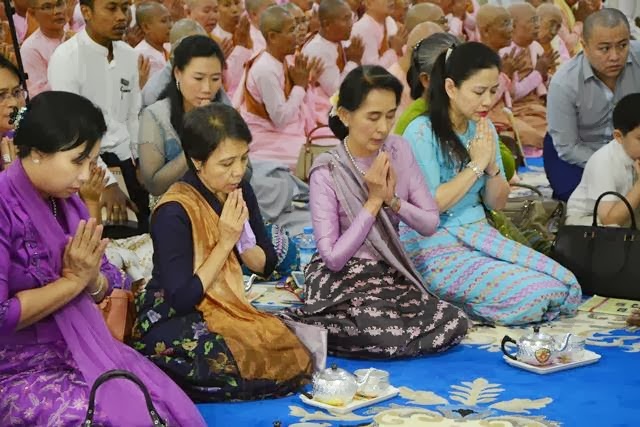 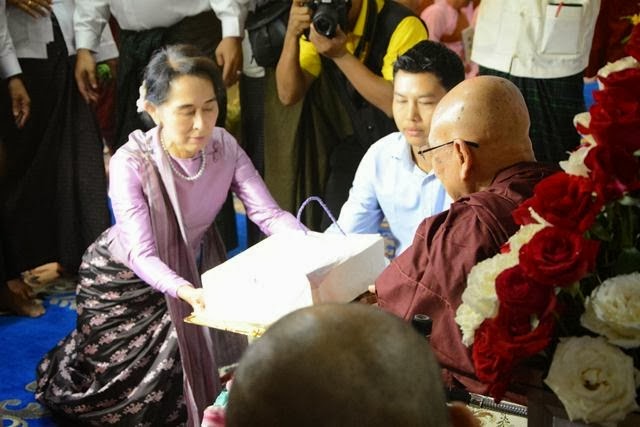 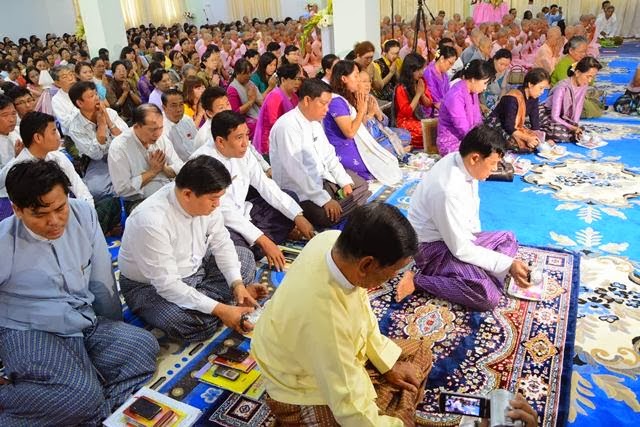 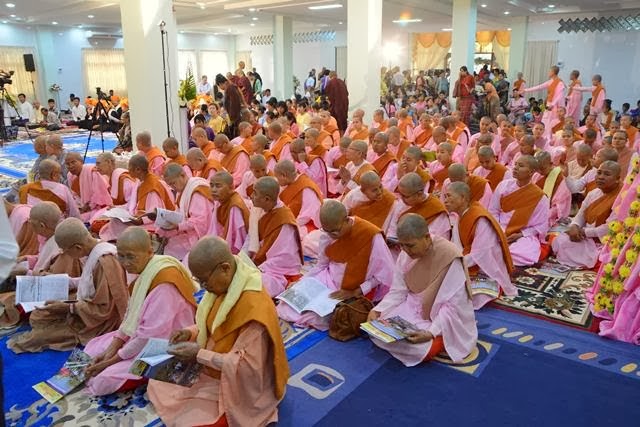 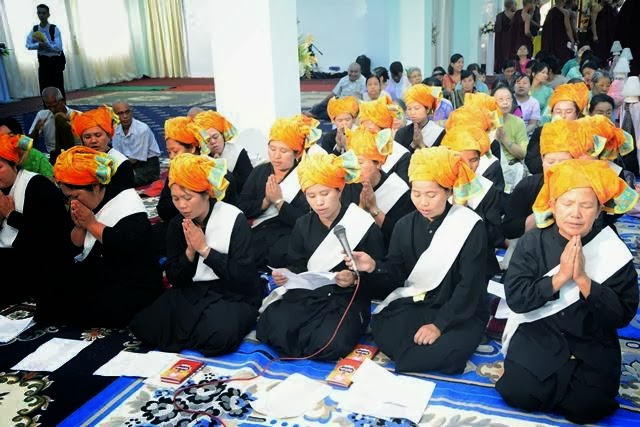