Myanmar Civil Aviation Department issued the news report only on March-14 of the search request for MH370 and their permission. Two foreign governments namely Malaysia and Australia have secretly asked for the permission to search for the MH370 Boeing 777 in a specific area inside Burma territorial waters in Bay of Bengal and Indian Ocean.

“The request for permission included the type of aircraft and specific area. So we allowed them a search period of seven days beginning on March-11. If they find nothing and want more days we are willing to grant an extension,” said Win Swe Htun the Deputy Director General of Myanmar Civil Aviation Department.


The air-force planes from Both Malaysia and Australia were allowed in that search permit but so far till March-13 they hadn’t started the search in Burma territorial waters yet. But Burmese government didn't mention the activities of two US Navy destroyers USS Kidd and USS Pinckney already inside the said search area.

There is a huge radar station secretly built and run by Chinese on Burma's Coco Islands just north of India's Andaman Island and if the missing MH370 was in its vicinity the Chinese and Burmese would have known it definitely. Hence the secret permission for US Navy to search the area since March-11. Only a few days later on March-14 Burmese Army disclosed the search to the country.

Analysis of the Malaysia data suggests the plane, with 239 people on board, diverted from its intended northeast route from Kuala Lumpur to Beijing and flew west instead, using airline flight corridors normally employed for routes to the Middle East and Europe, said sources familiar with investigations into the Boeing 777′s disappearance.

Two sources said an unidentified aircraft that investigators believe was Flight MH370 was following a route between navigational waypoints when it was last plotted on military radar off the country’s northwest coast. This indicates that it was either being flown by the pilots or someone with knowledge of those waypoints, the sources said.

The last plot on the military radar’s tracking suggested the plane was flying toward India’s Andaman Islands, a chain of isles between the Andaman Sea and the Bay of Bengal, they said.

Waypoints are geographic locations, worked out by calculating longitude and latitude that help pilots navigate along established air corridors. A third source familiar with the investigation said inquiries were focusing increasingly on the theory that someone who knew how to fly a plane deliberately diverted the flight.

“What we can say is we are looking at sabotage, with hijack still on the cards,”  said that source, a senior Malaysian police official. All three sources declined to be identified because they were not authorized to speak to the media and due to the sensitivity of the investigation.

Officials at Malaysia’s Ministry of Transport, the official point of contact for information on the investigation, did not return calls seeking comment. Malaysian police have previously said they were investigating whether any passengers or crew had personal or psychological problems that might shed light on the mystery, along with the possibility of a hijacking, sabotage or mechanical failure.

As a result of the new evidence, the sources said, multinational search efforts were being stepped up in the Andaman Sea and also the Indian Ocean. In one of the most baffling mysteries in modern aviation, no trace of the plane nor any sign of wreckage has been found despite a search by the navies and military aircraft of more than a dozen countries.

The last sighting of the aircraft on civilian radar screens came shortly before 1:30 a.m. Malaysian time last Saturday (1730 GMT Friday), less than an hour after it took off from Kuala Lumpur, as the plane flew northeast across the mouth of the Gulf of Thailand. That put the plane on Malaysia’s east coast.

Malaysia’s air force chief said on Wednesday an aircraft that could have been the missing plane was plotted on military radar at 2:15 a.m., 200 miles northwest of Penang Island off Malaysia’s west coast. This position marks the limit of Malaysia’s military radar in that part of the country, a fourth source familiar with the investigation told Reuters.

When asked about the range of military radar at a news conference on Thursday, Malaysian Transport Minister Hishammuddin Hussein said it was “a sensitive issue” that he was not going to reveal. “Even if it doesn’t extend beyond that, we can get the co-operation of the neighboring countries,” he said.

The fact that the aircraft – if it was MH370 – had lost contact with air traffic control and was invisible to civilian radar suggested someone on board had turned off its communication systems, the first two sources said.

They also gave new details on the direction in which the unidentified aircraft was heading – following aviation corridors identified on maps used by pilots as N571 and P628. These routes are taken by commercial planes flying from Southeast Asia to the Middle East or Europe and can be found in public documents issued by regional aviation authorities.

In a far more detailed description of the military radar plotting than has been publicly revealed, the first two sources said the last confirmed position of MH370 was at 35,000 feet about 90 miles off the east coast of Malaysia, heading towards Vietnam, near a navigational waypoint called “Igari”. The time was 1:21 a.m..

The military track suggests it then turned sharply westwards, heading towards a waypoint called “Vampi”, northeast of Indonesia’s Aceh province and a navigational point used for planes following route N571 to the Middle East.

From there, the plot indicates the plane flew towards a waypoint called “Gival”, south of the Thai island of Phuket, and was last plotted heading northwest towards another waypoint called “Igrex”, on  route P628 that would take it over the Andaman Islands and which carriers use to fly towards Europe.

The time was then 2:15 a.m. That is the same time given by the air force chief on Wednesday, who gave no information on that plane’s possible direction. The sources said Malaysia was requesting raw radar data from neighbours Thailand, Indonesia and India, which has a naval base in the Andaman Islands.

(Blogger's note: The crazy thing is why did Malaysia and Australia and US Navy ask Burma for permission to search on March-9 almost immediately after MH370 suddenly disappeared on March-8? Something must have triggered that action and I believe the trigger is the Chinese detection of MH370 by their top-secret radar station on Burma's Coco Islands. Bear in mind that most of the 239 passengers on MH370 were Chinese nationals and that's why Chinese are compromising their top-secret radar station on the Coco Islands.) 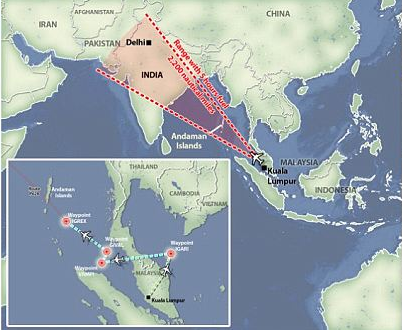 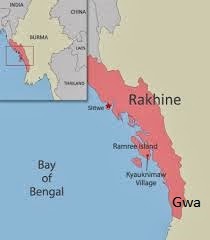 According to not-yet-confirmed reports coming out of Burma some local villagers from Nant-thar Island in Kyaintalee sub-Twonship of Gwa Twonship in Yakhine State had witnessed a big jet plane crashing down into the nearby sea on 8 March 2014 the day Malaysian Airways's MH370 suddenly disappeared out of the blue sky.

Since the sighting of MH370 came out on March 13 Burma Navy has now been searching the area in the Bay of Bengal just off the southern tip of Arakan extensively with all their naval frigates and other floatila of assorted naval ships and civilian boats.