(Articles and photos direct from Burma Army’s Myawaddy on February 28, 2014.)

Anawyahtar (1044-1077) was the name of most famous Burmese king who was the 42nd king of the Bagan Dynasty and also the one who established the First Burmese Empire nearly a thousand years ago in eleventh century by wiping out all ethnic oppositions to Burmese dominance in the fertile Irrawaddy Valley area and the surrounding vast hilly lands soon to be known as Myanmar or Burma.

Most significant of the widely publicized and televised wargame was that the terrain used was very similar or even landscaped to the terrain near Panseng the Headquarters town of the UWSA (United Wa State Army) the notorious narco-insurgent army on the region straddling the long Burma-border with China.


Pro-China UWSA Wants To Secede From Union Of Burma

Wa’s formidable ethnic army UWSA has been in peace with Burma Army for a very long time since their Communist masters CPB (Communist party of Burma) fatally imploded in 1989.

More than 30,000 strong UWSA is the richest and largest ethnic insurgent army in Burma and lately they have been airing their desire loudly to have their own statehood. And Burmese army and general public widely believe that the UWSA with very strong Chinese support has a well-hidden intention to eventually secede from the Union and join China.

Apart from using Chinese language Mandarin and Chinese currency Yuan and Chinese Telecommunications and Chinese Electricity almost everything in Wa territory is basically linked back to bordering China. And most of UWSA leadership have unlawful dual-China-Burma citizenships as their forefathers were the infamous Red-Guards originally from China.

Originally controlling only a small territory by the Chinese border, the biggest and richest of all ethnic-insurgent armies in Burma, UWSA’s ever-expanding influence has now reached to the area down south previously controlled by SSA (Shan State Narco Army) and KNLA (Karen National Liberation Army) by the Thai border.

Creation Of Wa-South On Thai Border Near Tachileik

Before 1994 UWSA was restricted into their ethnic Wa area by Burmese Army. But during mid-1990s war with Opium-King Khunsar’s Shan State Army (SSA - now led by another opium king General Ywet-sit) the most notorious narco-insurgent army in Burma that time Burmese Army used some brigades of UWSA against the Shan insurgents.

In 1996 after Khunsar’s sudden surrender to Burmese Army the UWSA was encouraged to move down south by the Thai border to occupy the power vacuum left by the defeated SSA. The 19,000-strong five brigades of UWSA now occupied the area known as Wa-South from near Tarchileik to the border of Kayah State in South.

This was what Aung Kyaw Zaw the son of famous Brigadier-General Kyaw Zaw of CPB remarked of the Wa-South.

“After Khunsar’s Surrender Burmese Army moved some Wa from panseng to the down south. Their order was for only 80,000 Wa to  move but more than 100,000 Wa, many of them Communist Chinese from China, ended up in now Wa-South.

Of course, they had to fight the SSA-Shans off their homeland. The severe weather and rough terrains and all the battles killed at least 5,000 Wa back then. Now Burmese want them to vacate that area and go back to Panseng and Wa will not do such a thing and they will fight to their last man to defend their new land Wa-South.”

The UWSA brigades even helped Burmese Army defeat Thai Army’s incursion into disputed Burmese territory in 2001. But Burmese now want the UWSA to abandon Wa-South and Burmese army has forcefully cut the UWSA’s supply lines between Wa-North and Wa-South since 2011.

UWSA (or) the Wa Branch of China’s PLA?

There are only about 600,000 ethnic Wa in Burma. But the Wa army UWSA is more than 30,000 men strong with another 20,000 trained and armed as Wa militia ready to fight a war. And there are credible reports that a few PLA officers are in Panseng training Wa to use sophisticated weapons sold by China to UWSA such as tanks and helicopter gunships.

Originally established as CPB’s people militia units in the 1960s the Wa army quickly became the back bone of Burmese Communist Party till the CPB ‘s fatal implosion in 1989. Wa then formed UWSA and took over Panseng and expelled Burmese communists into China where old Burmese cadres are now slowly dying one after another of old age and diseases.

Since then UWSA has been in peace with Burmese and they even participated in 1993 Burma National Congress drafting a future constitution of Burma. But in 2009 they flat out refused to reform themselves as the Border Guard Force (BGF) as required by the Burma Army and since then UWSA has been rapidly expanding and strengthening its military forces.

That aggressive action on UWSA side is creating uneasy tension on Burmese side and the situation has slowly been escalating into an all-out war soon in a very near future. And the Burmese army’s latest Wargame Anawyahtar clearly was a final warning to the UWSA. 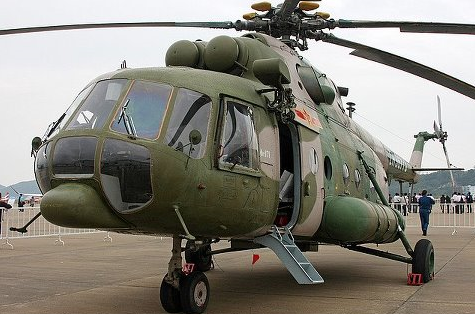 As the hostilities between Burma Army and UWSA slowly escalate Burmese Army established in 2011 the new regional command Ya-La-Kha (Middle-Eastern Regional Command) aka Kholam Regional Command at Kholam right on the strategic road connecting Wa-North by the Chinese border and Wa-South by the Thai border.

That effectively cut the Wa-South from Wa-North. Since then frequent skirmishes have been occurring between the UWSA troops and Burmese Army’s front-line battalions. Burmese army also shut down UWSA’s liaison offices in both Kyaingtong and Tachileik.

Many ethnic leaders active on the Thai border are saying that Burmese army has essentially stopped UWSA personnel from moving between Wa-North and Wa-South as more than 50,000 troops of Burmese army has now contained 19,000 strong five-brigades of UWSA in Wa-South.

There are now three Army Divisions each taking position at the towns of Maing-phyat, Maing-Sat, and Maing-Pan containing tightly the UWSA positions in Wa-South. Wa are now being forced to use the jungle as all vehicular roads in the region are tightly sealed off by the army battalions.

If any Wa wants to go from Wa-North to Wa-South first they have to travel by car from Panseng to Kengtung and from Kengtun to Tarchileik and then walk on the jungle trails to reach their camps in Wa-South. A very, very long way around.

“These actions are all being done by the Burma army. They’ve been doing it all around the year. Burmese generals have all the strategic and tactical pans already in their hands. Like playing games when they are at peace with Ywet Sit’s SSA like now they are trying to put pressure on UWSA. But they had used UWSA in past to attack SSA. Now they are testing UWSA strength all over the place. Like a chess game,” said Colonel Khun Okkar the leader of smaller Paoh National Liberation Army (PNLA) based at Mae Hong Son in North-western Thailand.
Weaponry Used In Wargame Anawyahtar (2014)

Unlike Wargame Aungzeya staged in March 2012 Burmese army this time had released elaborate details of weaponry used in this wargame Anawyahtar.

Heavy artillery: In addition to 105 mm howitzers used against KIA in the battle for Laiza heavier Soltam 155 mm guns and 120 mm heavy mortars were used this time. Burma Army’s heavy gunners even displayed their extraordinary skills by striking many single targets with all three different guns simultaneously during the wargame.
Main Battle Tanks: Instead of more modern T-72s and MBT-200 Russian Tanks lighter modified-Chinese tanks Type 59-D and Type 59-M (refitted with laser and infra-red gun sights for night fighting) were used for two tactical reasons, 1) to support the infantry, and 2) to handle the rough and hilly terrain.
APCs and IFVs: Both locally-made BTR-3U Armoured Personnel Carriers and Chinese Type 92 Infantry Fighting Vehicles suitable for hilly terrain were used in this wargame. Locally made MAV-2 Mark One (Myanmar Armoured Vehicles) were also used as telecommunication and Scouting vehicles.
Multi Launcher Rockets: Chinese-designed but locally-made Type-81 MLRS (Multi Launcher Rockets System) capable of firing 40 rockets from single launching vehicle were deployed. One single rocket from Type-81 MLRS can cause double the explosion of a 120 mm mortar shell.
MIG-29 Fighter Jets: One full squadron of Russian-made MIG-29 fighter jets were used as the main aerial support for the whole army division (LID-88) frontally assaulting the heavily-fortified and defended enemy position. Mi-35P helicopter gunships were also deployed in this wargame. 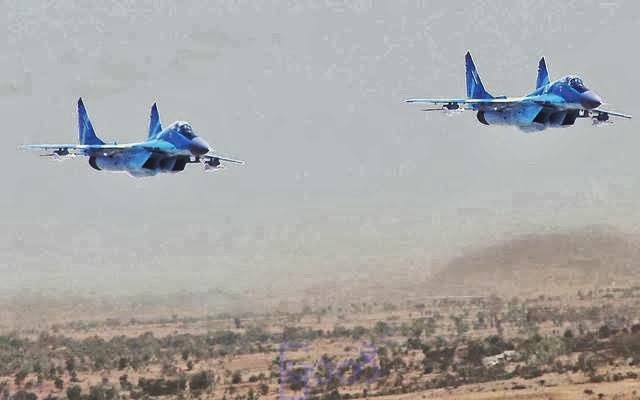 The Wargame Anawyahtar (2104) aiming at UWSA is basically a combined Infantry-Airforce-Tanks-Missiles-Artillery assault on an enemy’s fixed position like UWSA’s Panseng stronghold.

Like what they did as a similar wargame in March 2012 first and then followed by a large-scale ground and aerial assault on KIA’s Laiza Headquarters in December 2012 Burmese Generals are now flexing their muscles to recalcitrant UWSA.

And this time the large scale assault will be short but brutally decisive as Generals now have massive firepower from short-range tactical missiles and heavy artillery to smash the living shit out of UWSA and drive them Chinese-Wa back into China.

That has to be done soon this year as  2015 is the year of General Elections. Only signal the Burmese generals are now eagerly waiting for is the go-ahead from their Chinese counterparts from across the eastern border.

And before giving their signals to Burmese generals the clever Chinese generals are also selling tanks and APCs and helicopter gun-ships (all made-in-China of course) to the Wa at inflated prices to fight back the Burmese. And drug addicts all over the world are paying for the expensive Chinese arms sold to UWSA.


Not just British colonialists the Chinese also are good at waging opium-wars and Divide-and-Rule practices. 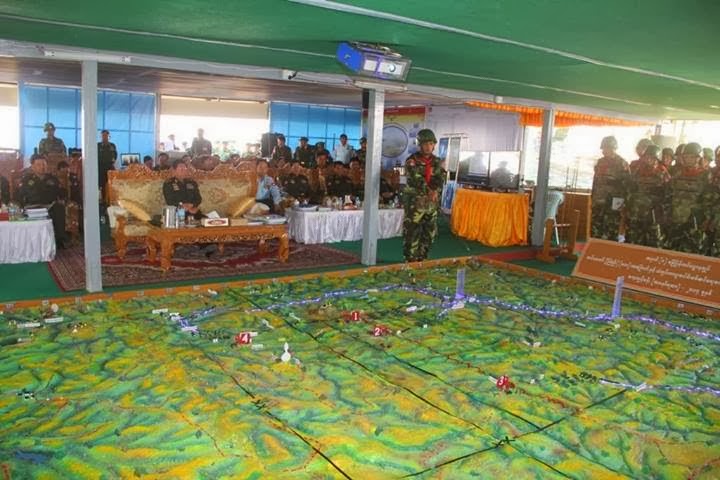