Lawmakers in Crimea unanimously voted Thursday to break away from Ukraine and join Russia – and called for a March 16 referendum so voters can ratify the controversial split.

“This is our response to the disorder and lawlessness in Kiev,” said Sergei Shuvainikov, a member of the local Crimean legislature, said. “We will decide our future ourselves.”

The 100-seat parliament in Crimea, which already has some autonomy under current Ukrainian law, voted 78-0 with eight abstentions in favor of joining Russia and holding the referendum. Crimean voters will also have the option of deciding to remain part of Ukraine, but with even more autonomy and power to decide local matters.

In Simferopol, Crimea’s capital, about 50 people rallied outside the local parliament Thursday morning waving Russian and Crimean flags. Among the posters they held was one that said “Russia, defend us from genocide.”


“We are tired of revolutions, Maidans and conflicts and we want to live peacefully in Russia,” said one of the bystanders, Igor Urbansky, 35. “Only Russia can give us a peaceful life.”

Maidan is the name of the downtown square in Kiev where tens of thousands of protesters contested the rule of Ukrainian President Viktor Yanukovych, who fled to Russia. But not all in this city favored the lawmakers’ action.

“This is crazy. Crimea has become Putin’s puppet,” said Viktor Gordiyenko, 46. “A referendum at gunpoint of Russia weapons is just a decoration for Putin’s show. A decision on occupation has already been made.”

But Svetlana Savchenko, another Crimean lawmaker, said the choice she and her fellow deputies took in favor of joining Russia will force Moscow to make a decision. “This is our principled position,” she said. “Now the Russian Federation must begin a procedure – will it take us in or not.”

Under the Soviet Union, Crimea belonged to the Russian Federation until it was transferred to Ukraine in 1954 by Soviet Premier Nikita Khrushchev.

There was no immediate response from the Ukrainian central government to the vote, but on Wednesday Ukraine’s prime minister vowed that Crimea would remain part of Ukraine. In Moscow, prominent parliamentarian Sergei Mironov introduced a bill to simplify the procedure to allow Crimea to join Russia and said it could be passed as soon as next week.

President Vladimir Putin has said Russia had no intention of annexing Crimea, but insisted residents of the peninsula on the Black Sea had the right to determine their own fate.

Earlier, Crimea’s new leader said pro-Russian forces numbering more than 11,000 now control all access to the peninsula in the Black Sea and have blockaded all military bases that have not yet surrendered. And the Russian Navy deliberately sank a cruiser Wednesday night to block the Ukrainian Navy ships deployed in Novoozerne, the Ukrainian Ministry of Defense said Thursday. 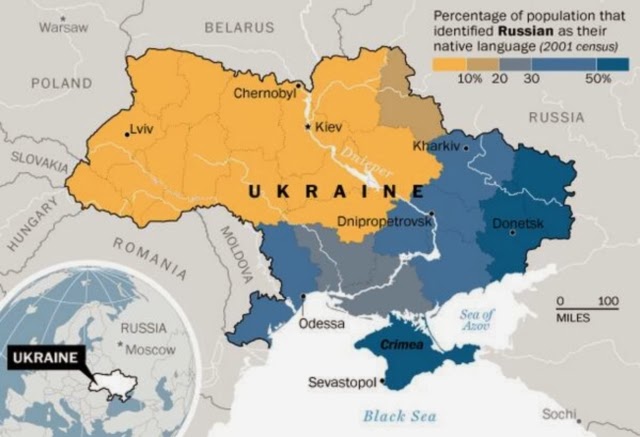 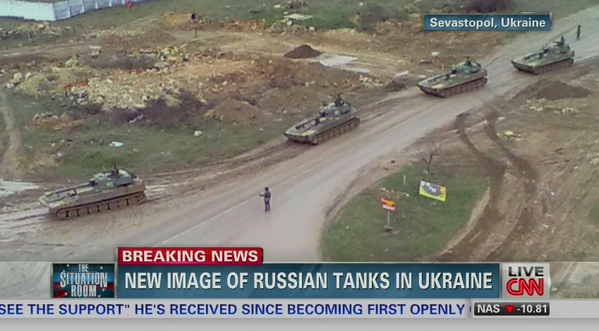 The Russians towed their ship Ochakov to a navigating channel, filled it with water and detonated explosives to make it sink, trapping the Ukrainian vessels in a lake that empties through the channel into the Black Sea. Also Thursday, European leaders said Russia will face sanctions over its military incursion into the Crimean peninsula unless it withdraws its troops or engages in credible talks to defuse the situation.

“We need to send a very clear message to the Russian government that what has happened is unacceptable and should have consequences,” British Prime Minister David Cameron said as he arrived at an emergency meeting of the bloc’s 28 leaders in Brussels.

But leaders appeared divided between nations close to Russia’s borders and some western economic powerhouses — notably Germany — that were taking a more dovish line.

“Whether [sanctions] will come into force depends also on how the diplomatic process progresses,”
German Chancellor Angela Merkel said, noting that foreign ministers including US Secretary of State John Kerry and Russia’s Sergey Lavrov were holding talks again in Rome on Thursday.


“Russia today is dangerous,” insisted Lithuanian President Dalia Grybauskaite, warning Moscow is seeking to expand its borders. “After Ukraine will be Moldova, and after Moldova will be different countries.”

Among initial sanctions Moscow could face are the suspension of talks on visa liberalization and an economic agreement. More drastic steps like asset freezes and travel bans on Russian officials were unlikely to be adopted, not least because of Europe’s close economic ties with Russia.

The US has already suspended talks on an investment treaty and threatened further steps. NATO on Wednesday suspended most of its meetings with Russian officials, halting military cooperation and deciding to review all aspects of its relationship with Moscow. “We cannot go back to business as usual,” Merkel said.

Poland, Lithuania and other eastern European countries closer to Russia’s borders pushed for a strong and united EU response, including meaningful sanctions, but Germany, the Netherlands and others preferred defusing the crisis through diplomacy.

“We should do everything to give the route of de-escalation a chance and if we come to the conclusion today or the next 24, 48, 72 hours that de-escalation is not an option then obviously sanctions are back on the table,” Dutch Prime Minister Mark Rutte said.

Russia is Europe’s third-largest trading partner and its biggest gas and oil supplier. EU exports to Russia in 2012 totaled $170 billion, and European banks have about 200 billion euros in outstanding loans to Russia.

“This is not just the Ukrainian-Russian crisis, this is the crisis in Europe,” Yatsenyuk said at a meeting earlier Thursday with European Parliament leaders. The EU proposed a $15 billion aid package for Ukraine Wednesday. The US has so far pledged $1 billion and is working on a more comprehensive package, in coordination with the EU and the International Monetary Fund.

Ukraine’s economy is faltering and the country is running out of cash. The government in Kiev estimates it will need $35 billion in bailout loans for this year and next. The EU also offered Ukraine a wide-ranging free trade and economic agreement that would draw Kiev closer to Europe and help boost its economy.