(News article and photos from the Narinjara News Agency on March 26, 2014.)

The massive protest held at 1 pm today was one of many bitter demonstrations against Dhaka Tribune’s deeply disturbing editorial “A Referendum in Rakhine State?” published on March 20.

“We totally and utterly oppose the Dhaka Tribune’s editorial calling for a Crimea-like referendum in Yakhine State so that their Bengali-Muslims illegally living in our Sittwe and Maungdaw could secede from our union and join Bangladesh. That was the reason we are protesting today at Bangladeshi Embassy,”  said Ye Min Oo one of the protest leaders and nationalist-Buddhist activists to the Narainjara.


The protesters were carrying the banners denouncing Bangladesh and also shouting loud chants against planned Bangladeshi land grab on Burma’s territory. They also delivered an open letter direct to the Bangladeshi Ambassador.

In the protest letter they stated that the Dhaka Tribune’s editorial was a direct attack on Burma’s sovereignty and also a direct provocation and incitement to create domestic unrest and racio-religious conflicts in Burma. The protesters also demanded a direct apology from the Bangladeshi Ambassador for the disturbing and offensive editorial of Dhaka Tribune news paper. 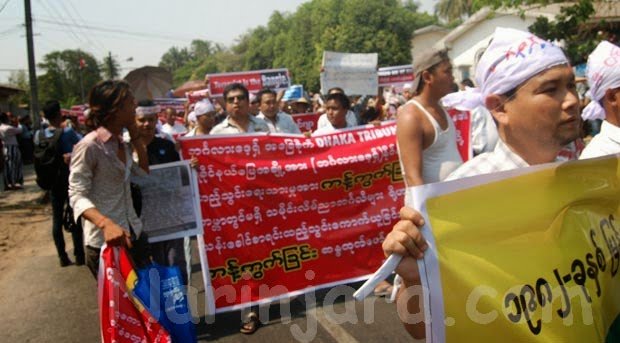 (Blogger's Notes: The anti-Bangladesh and anti-Bengali-Muslim protests nowadays in Burma are led obviously by the Nationalist-Buddhist monks with the tacit support of Burma Army and Government. And Every body in Burma is now wondering where the hell were the Muslim-friendly NLD (National League For Democracy) led by our world-famous Aung San Suu Kyi and other so-called people's politicians like 88-Generationers when they are needed in such dire times. Apparently they all have been disturbingly silenced by their foreign donors and supporters such as UN, UK, USA, George Soros, and OIC just to name a few powerful ones.)