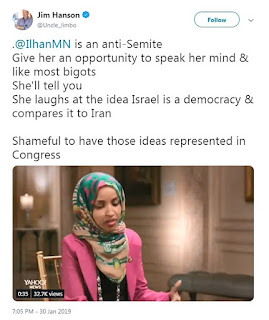 Omar Received Tens of Thousands of Dollars from PACs and Lobbyists: Look away for a few minutes and you miss the latest jabs. In one corner is Democratic Rep. Ilhan Omar, spouting and repeating anti-Semitic and anti-Israel smears.

In another corner are old-guard Democrats whose younger party members are proudly waving around their anti-Israel and anti-Semitic bona fides, potentially hurting the party with historically stalwart supporters.

In still another corner there are Omar’s supporters. They claim Omar is the victim of racism, sexism and whatever-other-isms are available. Many of Omar’s supporters demand to know why she should be forced to apologize for saying wealthy Jews use their influence to bribe congressional members.

In the final corner are the Republicans, gleeful that someone else is finally on the hot seat, accused of spouting bigotry in public.

On Monday afternoon the Democratic House leadership called out Omar for writing that the American Public Affairs Committee uses its “Benjamins” (i.e. hundred dollar bills) to coerce members to support Israel. AIPAC is not actually a PAC at all, so it doesn’t donate any money directly to candidates; and much of the money its biggest supporters donate goes to Democrats.

In the public reprimand issued by Democratic House leadership, Omar was instructed to “immediately apologize” for stepping beyond the bounds of legitimate criticism and descending into “anti-Semitic tropes and prejudicial accusations” about congressional supporters of Israel.

After the reprimand and following a meeting with Pelosi, Omar issued what she called an “unequivocal apology,” stating she “never intends to insult her constituents or Jewish Americans as a whole.”

But Omar’s two-paragraph statement ended with a sharp pivot. Criticized for wrongly suggesting AIPAC gives money directly to political candidates, Omar ends her apology by targeting the influence lobbyists have with politicians.

“My intention is never to offend my constituents or Jewish Americans as a whole. We have to always be willing to step back and think through criticism, just as I expect people to hear me when others attack me for my identity,” said Omar. This is why I unequivocally apologize.”

Then she says, lobbyists and PACs “play a problematic role in our politics, whether it be AIPAC, the NRA or the fossil fuel industry. It’s gone on too long and we must be willing to address it.” Not surprisingly, Omar supporters were not happy with what they characterized as a double standard.

Rep. Max Rose, D-NY-4 criticized Omar when she made her anti-Semitic comments. But immediately following her apology, Rose claimed that the Republicans shouldn’t be “chickenshit” about antisemitism. Rose said it was hypocrisy, pointing to statements made by Rep. Kevin McCarthy, R-CA.

He said McCarthy had criticized Michael Bloomberg, George Soros and Tom Steyer for “pulling strings behind the scenes.” This, according to Rose, was evidence of “hypocrisy” in the Republican caucus.

Rose missed the mark. Of the three billionaires Rose cited, only Bloomberg has any semblance of connection to Jewish practice; Steyer’s father was Jewish but he identifies as Episcopalian; and Soros, born to Jews during World War II Hungary, said that his parents were so “uncomfortable with their religious roots” that they changed their name from Shwartz to Soros in 1936.

They did this he said, to disassociate themselves from the Jewish community. Further, Soros is frequently regarded as anti-Israel by Israeli officials, as reported earlier this year.

Fewer than three hours after her “unequivocal” apology, Omar retweeted, oozing “solidarity,” the thread of a friend supporting and substantiating exactly the same smears for which Omar had been forced to apologize: that congressional support for Israel was all and only “about the Benjamins.”

So that’s the general chronology. But there’s more. While Omar, falsely, criticized a Jewish lobbying organization, AIPAC, for giving money directly to political candidates, she apparently has no trouble accepting money from political action committees.

Omar Received Tens Of Thousands Of Dollars From CAIR

According to the records of the Federal Election Commission, last summer Omar received nearly $60,000 from PACs. One PAC from which Omar received thousands of dollars in 2018 is the Council on American Islamic Relations. CAIR was named as an un-indicted co-conspirator in the 2009 Holy Land Foundation trial, the largest terrorism-financing trial in American history.

And CAIR not only has a PAC, it is a lobbying organization. On Jan.10, CAIR hosted the Community Congressional Reception at which Omar spoke. In all, Omar received tens of thousands of dollars from lobbying groups. None of her money came from AIPAC or the NRA or the fossil fuel industry; That must be a coincidence. The lying Muslim bitch did not mention ‘Benjamins’ from CAIR at all on her tweets.

It seems like only yesterday that Ilhan Omar blamed the Jews, err excuse me “AIPAC” for all the money in politics. Oh that’s right, it was over the past weekend. Apparently Omar doesn’t really have any problems with big money and lobbyists as long as the money isn’t coming from Jews.

CAIR, the group linked to Islamist terrorism is flying with Ilhan Omar to Los Angeles for a big fundraiser. CAIR is of course the Muslim lobbying group that spends big money trying to influence politics. But they aren’t Jewish, so according to Democrats and Omar, they are fine.

Newly elected Rep. Ilhan Omar will jet off to Los Angeles next month to keynote a fundraiser for the Council on American Islamic Relations (CAIR), a terror-tied organization that was named an unindicted co-conspirator in the largest terrorist financing case in U.S. history.

She will deliver her address alongside CAIR-Florida director Hassan Shibly, according to a CAIR flier promoting the event. Shibly is a dedicated Islamist and bigoted gay basher. A fan of radical clerics, he has routinely refused to categorize U.S.-designated terror groups Hamas and Hezbollah as terrorist organizations, according to the Clarion Project.

Moreover, Shibly regularly takes to social media to demonize the U.S. military as equivalent to the jihadi terrorists that they are fighting.

The director of CAIR-Los Angeles is Hussam Ayloush, who, like many CAIR executives, has disturbing Islamist views. Following the tragic San Bernardino terrorist attacks, Ayloush suggested that the United States was “partly responsible” for the ISIS-led attack on innocents in California.

“Let’s not forget that some of our own foreign policy, as Americans, as the West, have fueled that extremism,” he added. Ayloush has in the past described U.S. military operations in Iraq and Afghanistan as part of a campaign to instill “fear of the Muslims.” 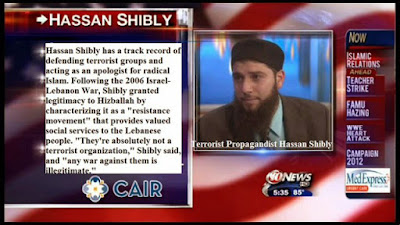