Trump Cut 90% Of Muslim Refugee Inflow To US

Actually, there IS something to like about the Somali Muslim Democrat Congressjihadi, Minnesota Rep. Ilhan Omar. Believe it or not they attacked US on 9/11 and now two of their bitches are sitting nicely in Congress spearheading the vile attacks on the president of the United States. Calling US “Morally Bankcrupt” for saving her life from a brutal refugee camp and educating her in US, bitch has gone too far.

The more the sharia-compliant left wing media promote her, the more Americans will understand why Muslims in America pose a threat to the country, while Muslim immigration needs to be cut even more than President Trump has already cut it in his first two years. Trump has cut Muslim refugees 91%, Muslim immigrants 30%, Muslim visitors 18%

On December 7, 2015, President Trump called for a Muslim ban. This ban later turned into “extreme vetting” policies, which—according to Trump—had the same goal. Now nearing the 2-year mark of his administration, an accurate assessment of these policies is now possible.


All the major categories of entries to the United States—refugees, immigrants, and visitors—are significantly down under the Trump administration for Muslims or applicants from Muslim majority countries. 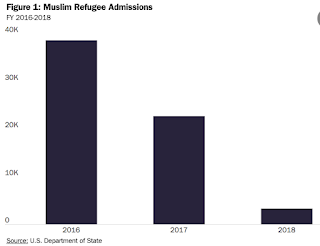 The decline in immigrant visas occurred primarily in the family reunification categories, which President Trump refers to as “chain migrants.” From FY 2016 to FY 2018, the number of family-sponsored immigrants declined by 29,607—a 36 percent decline.

Though they were already relatively low to begin with, nonimmigrant visa approvals—temporary visas for workers, students, and tourists—from Muslim majority have also declined 18 percent from 2016 to 2018.

Beyond the travel ban, President Trump has imposed “extreme vetting” policies that make immigrating more bureaucratic and costly for everyone. He has massively increased the length of immigration forms, adding new subjective “security” questions.

According to the American Immigration Lawyers Association, more applications for Muslims are disappearing into an “administrative processing” hole, where applications are held up for security screening. Undoubtedly, some Muslims simply want to avoid the United States where stories of profiling and discrimination abound. 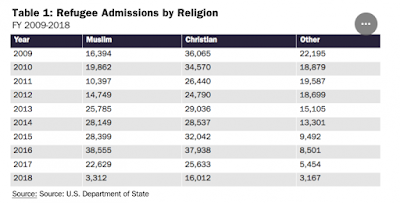 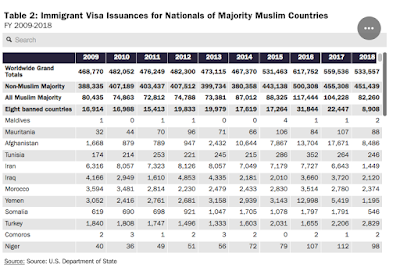