(Phyllis Chesler’s article from The ISRAEL NATIONAL NEWS on 15 February 2019.) 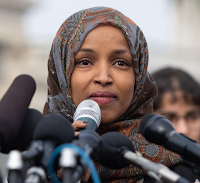 The two-faced women who hate Israel - and Jews: Now that she has attacked Elliot Abrams, I wonder where Representative Ilhan Omar stands on the issue of FGM given that she is a Somali-American and the practice is pandemic among Somalis. No one has asked her about it publicly. I am asking her here.

Many Westerners seem to believe that oppressed Muslim, Hindu, or Sikh women are by definition, frightened, submissive, peaceful, and quiet. Is this true of face-masked or hijab-wearing women who purposely stand right next to other women at prayer and who blow them and their young children right up?

How quiet were the young women in hijab who refused to allow Nonie Darwish to speak at Wellesley by repeatedly coughing loudly, then getting up, one by one, to leave their row and the room, only to return to continue their demonstration?


How peaceful are those mothers and mothers-in-law who beat and humiliate their daughters and daughters-in-law daily, who death threaten them when they refuse to veil, marry an odious first cousin, marry out of caste, make friends with infidels, or venture beyond their own communities?

Memoirs that are painful to read confirm the extraordinary cruelty of mothers and older female relatives who preside over their daughters’ FGM procedure and/or who refuse to allow surgery to correct for deadly infections. I wonder where Representative Ilhan Omar stands on the issue of FGM given that she is a Somali-American and the practice is pandemic among Somalis.

Has anyone asked her about this? Well, I am doing so here. Yes, I am talking about Representative Omar, among others who are perhaps, unexpectedly, and extremely angry, even aggressive. Were she to behave this way at home or in a mosque—God knows what might happen to her. 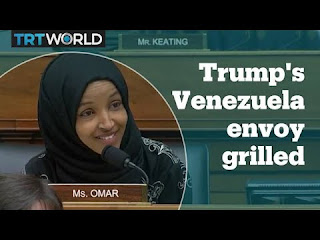 Well, maybe Omar could get away with it right now but most other women in her community could not. For example, Representative Ilhan Omar just castigated senior diplomat Elliot Abrams uncivilly, shamelessly, and with undisguised malicious pleasure. But it seems she was reading directly from the Qatar-funded Al Jazeera 2/12 “hit” piece on Abrams (whom she addressed as “Adams”). This point was made by Mike Waller on Twitter.

Is Ilhan accepting or expecting “Benjamins” from the Qatari regime which has been known to fund worldwide Jihad terrorism and massive disinformation campaigns against Jewish Israel and the West in textbooks, via funding professorships and Institutes on American university campuses, and in terms of lobbying governments here and everywhere?

It’s true: Both religious and non-religious women can be very aggressive. Women are only human, as close to the apes as to the angels. Unfortunately, they are usually allowed to indulge their rage only against other women whom they are supposed to keep in line.

Non-religious “social justice” female street demonstrators (as well as elected officials) are increasingly loud, angry, even physically menacing. I admit it: I wish that angry women were less invested in hating Israel and loving imaginary, Sharia-compliant countries and would focus their considerable rage on women’s issues such as FGM and Honor Killing.

Women are as entitled to express anger as men are. Since women are not “supposed” to do so, we are probably more judgmental when they do. Also, psychologically, we may unconsciously associate any and all female anger with our own mothers’ anger—which is always terrifying to a dependent child.

Nevertheless, I do not like public displays of uncontrolled rage. They unsettle and alarm me. I am so old-fashioned. I still expect civility from both men and women, at home, on the street, and on the part of elected officials. I say this even as—or because—I hear the sound of the dreaded timbrels, smell book burning, and fear that our entire civilization may soon go up in smoke.

And it is inconceivable that a hijab wearing Somali woman would dare to try to humiliate a man, especially in public. It seems this is permitted only if that man is a Jew and an infidel.

(Prof. Phyllis Chesler is a Ginsburg-Ingerman Fellow at the Middle East Forum, received the 2013 National Jewish Book Award,.authored 18 books, including Women and Madness and The New Anti-Semitism, and 4 studies about honor killing, Her latest books are An American Bride in Kabul, A Family Conspiracy: Honor Killing and A Politically Incorrect Feminist.)

Ilhan Omar, the newly-elected U.S. representative from Minnesota’s 5th congressional district, and a member of the left-wing “Justice Democrats,” argued against a 2017 bill in her state that increased penalties for female genital mutilation. 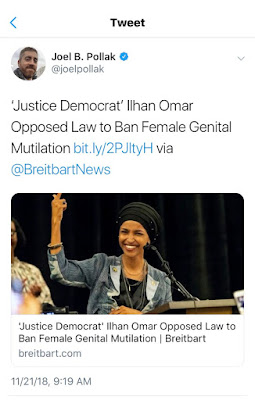 Omar is being celebrated as one of the first two Muslim women elected to Congress, and a member of a new cohort of young, “progressive” and “diverse” representatives who purportedly represent the future of the Democratic Party.

Yet Omar’s stance on female genital mutilation (FGM) is anything but “progressive.” In 2017, she questioned a bill in the Minnesota State House against the practice, making it “a felony for parents to subject their daughters to the procedure and calls for loss of custody and prison terms from five to 20 years, depending on the extent of the injuries,” as well as “increasing penalties for those who perform the procedure,” the Minneapolis Star-Tribune reported.

While she agreed that the practice was “heinous,” and ultimately voted for the bill — contrary to at least one report — Omar claimed that FGM should not be singled out by a new law, and that parents should be charged under existing laws.

She was quoted in local news as arguing: “I don’t want us to create laws because we want to get into the media and because we want a flashy headline.” She also reportedly opposed removing victims from their parents’ custody, according to Alpha News. The bill later failed in the Republican-controlled Minnesota State Senate.

The issue came to the fore Tuesday after a federal judge in Michigan tossed out federal criminal charges against a group of Muslim defendants who had carried out FGM on young girls, ruling the federal ban unconstitutional. The state laws against the practice are valid, but the federal law overstepped constitutional boundaries, the judge ruled. 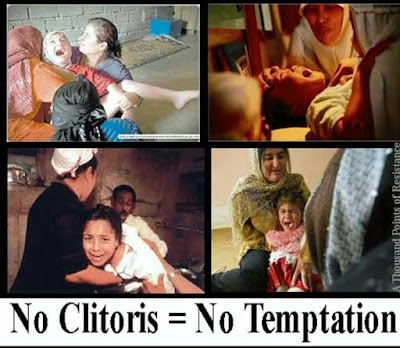 Letters To The Editor: Regretting vote for Ilhan Omar

I voted for Rep. Ilhan Omar. I am sorry I did. My hope was that now we have a large Somali population in Minnesota that it would be a good thing. To be elected to the United States Congress is such an honor and she could have done so much to promote relations between Somalis and other immigrants. But to make anti-semitic remarks about our Jewish allies is disgusting.

Our Jewish friends and neighbors come from the Holocaust. Isn’t that enough and didn’t the Somali people come to our country because they were being persecuted? In my opinion, Rep. Omar is not a good representative of this country. There is no place for racism in our Congress. I urge Rep. Omar to resign.