Ilhan Omar’s Anti-Semitism: Where Does She Get It?

(Nancy Kobrin’s article from The CLARION PROJECT on 18 November 2018.) 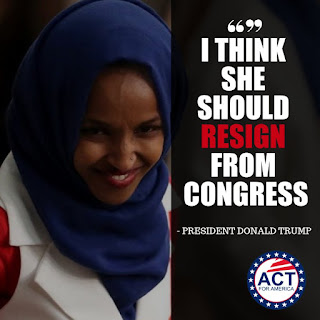 As Hamas was attacking Israel in 2012 and bombarding its civilian population with Grad and Qassam rockets, Ilhan Omar — who was recently elected to Congress (D-MN) — tweeted “Israel has hypnotized the world, may Allah awaken the people and help them see the evils of Israel.”

During her campaign, she defended that statement, saying it was not anti-Semitic. “Drawing attention to the apartheid Israeli regime is far from hating Jews,” she declared. Israel an apartheid state? Israel is evil? Where did she get these views?

We know from writers such as Ayaan Hirsi Ali that Islamist anti-Semitism in Somalia runs deep. (There is also the country’s history of discriminating against their own Bantu people, an ethnic minority in Somalia.)

I learned too, from first-hand experience, about Islamist anti-Semitism in Somalia when I did prison interviews in Minneapolis’ Hennepin County Jail. The Somalians there had never even met a Jew nor knew anything about what Jews believe.  Yet they were virulently anti-Semitic. (It was a classic case of learned anti-Semitism – the “anti-Semitism- without-Jews syndrome.”)


At the core of anti-Semitism is paranoia and self-hate. Somali Muslims who are anti-Semites project their own rage onto the Jew, casting off to the Jew what they hate about themselves.

With the advent of brutal Islamism in Somalia (which began clandestinely in 1975, then openly in 1991 when the state collapsed) on top of a horrendous clan system perpetuating violence (especially against little girls whose genitals are mutilated), there is no longer a stable, pluralistic society in Somalia composed of diverse ethnicities and religions as there once was.

Believe it or not, there were once Christians and even Jews in the Somalian Horn of Africa for thousands of years. More recently, in the 19th century, Somalia was home to a diverse trading network, which extended from New York to Yemen to Somalia and continued all the way to Indonesia.

With the outbreak of the Arab-Israeli Six Day War in 1967, the Jews were summarily deported from Somalia, forced to leave everything behind as they fled for their lives. This outrageous deportation took place only seven years after Israel so graciously and bravely become the first country to recognize the newly independent nation of Somalia in 1960.

Israel has taken in Somalis who have sought asylum in their country. Some of these immigrants are receiving help to pursue higher education. The president of Somalia also made an unofficial visit to Tel Aviv several years ago.

Yet Omar believes Israel is hypnotizing the world to do evil? Omar manifests a typical kind of destructive and limited Islamist thinking and behavior. When Omar greeted her audience after the election with the words “As-Salam-Alaikum,” she unwittingly disclosed more of this bias. Instead of maintaining professional neutrality and inclusiveness (she is now a public servant for all Americans), she used words she knew well that would exclude many.

During her campaign, Omar claimed that she did not support the Boycott, Divest and Sanction (BDS) movement against Israel. Yet just days after she was elected, she stated that she, in fact, believes in and supports the BDS movement, exhibiting a stunning duplicity. Omar needs to think again. As the Somali proverb goes: Waran Kugu Soo Noqon doona lama Rido, don’t throw a spear that can come back to you.

The new (and continued) controversy with Ilhan Omar forces a new conversation on Somali refugees. After the latest round of rapid-fire tweets pushing historically vile myths about the Jewish people, it might be time for America to take closer look at its refugee communities. That begins with looking at Ilhan Omar and the Somali community she comes from.

Ten years after Ilhan Omar was born in Mogadishu, the 1991 Somali civil war forced her family to head for a refugee camp in Kenya where they spent four years. Along with her family, Omar arrived to the United States with refugee status in 1995. Omar was already a teenager.

Despite having predominantly lived in the United States, Omar still carries the broken value systems of all third-world Muslim countries when it comes to how Jews are viewed. In most Muslim countries — and in un-evolved Muslim communities — Jews are seen as notorious conspirators not worth trusting, even not worth treating with human dignity.

This holds despite the fact that Ilhan Omar’s family background is portrayed as being educated white collar workers. Her father is reported to have worked as a teacher trainer, while her grandfather is said to have been the director of marine transport in Somalia. Her aunts and uncles are reported to have worked as civil servants and educators. In the U.S., that work ethic branched into democratic citizenship. 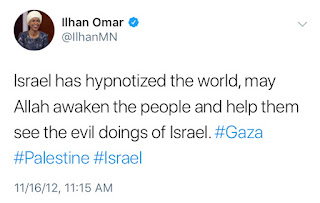 And yet, less than two months into office as a Congresswoman of one of the highest caliber nations in the world, Omar cannot refrain from blasting anti-Semitic slurs with disturbing glee. Each slur is followed by hollow and forced apologies, before doing it again.

It is with deep disappointment that I confess: Ilhan Omar’s repeat performance is eerily reminiscent of the Somali pirate in the film Captain Phillips — a power-hungry uncultured individual who has to keep proving how “strong” he is.

If Minnesota’s Somali community elected Ilhan Omar as their representative, we need to to ask: What are the values of the largest Somali community in the Somali diaspora? Did they ever leave Somalia or did they bring Somalia with them?

As of 2015, 150,000 Somalis lived in the U.S., with Minnesota hosting the largest population because of the resources provided through a refugee-friendly infrastructure in the liberal state. Yet, we know that:

* The Somali community is ripe with the practice of female genital mutilation (FGM);
* An explosive story of daycare fraud in Minnesota’s Somali community was discovered when “the carry-on bags of multiple airline passengers traveling from Minneapolis to Somalia contained millions of dollars in cash, on a regular basis;”
* This high-immigration population has made the Somali demographic vulnerable to Islamist radicalization. As the The Washington Times reported, “The State Department has helped to relocated tens of thousands of refugees … but the effort is having the unintended consequence of creating … a rich pool of potential recruiting targets for Islamist terror groups;” and
* The young girls and women in the community are prone to dressing as orthodox Muslims, with hijabs and long gowns, indicating an unlikeliness of adaption or (more importantly) integration with an outside community.

As a daughter of refugees, and as a Muslim American who experienced waves of immigration across three different continents, I find it personally concerning that we’re failing our refugee communities by allowing them to remain in the same states of minds, unchallenged and unacculturated as if they never left war torn regions or refugee camps.

Building a new life and discovering hope for the future isn’t simply about primal needs of food, shelter and security. It needs to be about something more; it needs to be about challenging the broken mindsets and broken patterns of behavior that in many cases gave birth to the Third World and their offspring.

If refugee resettlement infrastructures and policies don’t help develop healthier lifestyle patterns and neural networks that challenge primitive thinking (such as intolerance toward minority religions such as Judaism), then we’re failing refugees. We’re not helping anyone by bringing more people over here if the worst of who they’ve been indoctrinated into becoming has not — and will not ever — be formally challenged. 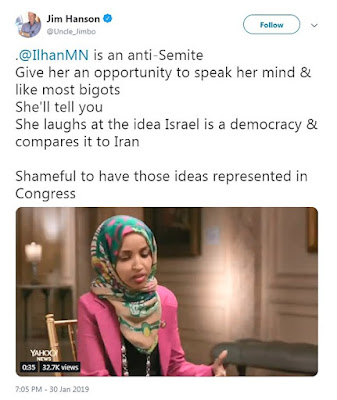