Socialist Venezuela: The Rise & Fall Of A Petro-state 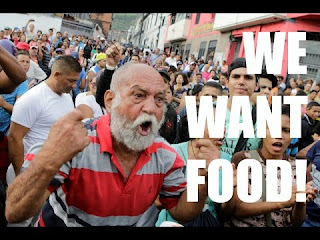 Venezuela, home to the world’s largest oil reserves, is a case study in the perils of petrostatehood. Since its discovery in the 1920s, oil has taken Venezuela on an exhilarating but dangerous boom-and-bust ride that offers lessons for other resource-rich states.

Decades of poor governance have driven what was once one of Latin America’s most prosperous countries to economic and political ruin. If Venezuela is able to emerge from its tailspin, experts say that the government must establish mechanisms that will encourage a productive investment of the country’s vast oil revenues.

What is a petrostate? Petrostate is an informal term used to describe a country with several interrelated attributes:

1. government income is deeply reliant on the export of oil and natural gas,
2. economic and political power are highly concentrated in an elite minority, and
3. political institutions are weak and unaccountable, and corruption is widespread.


What’s behind the petrostate paradigm?

Petrostates are thought to be vulnerable to what economists call Dutch disease, a term coined during the 1970s after the Netherlands discovered natural gas in the North Sea. In an afflicted country, a resource boom attracts large inflows of foreign capital, which leads to an appreciation of the local currency and a boost for imports that are now comparatively cheaper.

This sucks labor and capital away from other sectors of the economy, such as agriculture and manufacturing, which economists say are more important for growth and competitiveness. As these labor-intensive export industries flag, unemployment could rise, and the country could develop an unhealthy dependence on the export of natural resources.

In extreme cases, a petrostate forgoes local oil production and instead derives most of its oil wealth through high taxes on foreign drillers. Petrostate economies are then left highly vulnerable to unpredictable swings in global energy prices and capital flight.

The so-called resource curse also takes a toll on governance. Since petrostates depend more on export income and less on taxes, there are often weak ties between the government and its citizens. Timing of the resource boom can exacerbate the problem.

“Most petrostates became dependent on petroleum while, or immediately after, they were establishing a democracy, state institutions, an independent civil service and private sector, and rule of law,” says Terry Karl, a professor of political science at Stanford University and author of The Paradox of Plenty, a seminal book on the dynamics of petrostates. Leaders can use the country’s resource wealth to repress or co-opt political opposition. 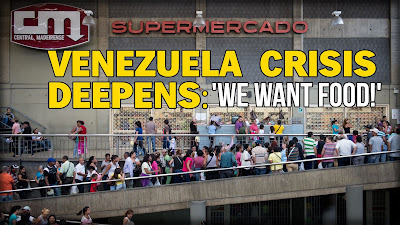 How does Venezuela fit the category?

The most recent plunge in oil prices—falling from more than $100 per barrel in 2014 to a low of under $30 per barrel in early 2016—has sucked Venezuela into an economic and political spiral, from which it could take decades to recover. A number of grim indicators tell the story.

1. Oil dependence. Oil sales account for 98 percent of export earnings and as much as 50 percent of gross domestic product (GDP).
2. Falling production. Oil output has declined for decades, reaching a new low in 2018.
3.Spiraling economy. In 2018, GDP shrunk by double digits for a third consecutive year.
4. Soaring debt. Venezuela has missed billions of dollars in payments since defaulting in late 2017.
5. Hyperinflation. Annual inflation is running at more than 80,000 percent.
6. Growing autocracy. President Nicolas Maduro has violated basic tenets of democracy to maintain power.

Together these have caused a devastating humanitarian crisis, with severe shortages of basic goods, such as food and medical supplies. In 2017, Venezuelans lost an average of twenty-four pounds in body weight. Nine out of ten live in poverty. Roughly one in ten have fled the country.
How did Venezuela get here?

A number of economic and political milestones mark Venezuela’s path as a petrostate. Discovering oil. In 1922, Royal Dutch Shell geologists at La Rosa, a field in the Maracaibo Basin, struck oil, which blew out at what was then an extraordinary rate of one hundred thousand barrels per day.

In a matter of years, more than one hundred foreign companies were producing oil, backed by dictator General Juan Vicente Gomez (1908–1935). Annual production exploded during the 1920s, from just over a million barrels to 137 million, making Venezuela second only to the United States in total output by 1929.

By the time Gomez died in 1935, Dutch disease had settled in: the Venezuelan bolivar had ballooned, and oil shoved aside other sectors to account for 90 percent of exports.

The Hydrocarbons Law of 1943 was the first step in that direction, requiring foreign companies to give half of their oil profits to the state. Within five years, the government’s income had increased sixfold.

Punto Fijo pact. In 1958, after a succession of military dictatorships, Venezuela elected its first stable democratic government. That year, Venezuela’s three major political parties signed the Punto Fijo pact, which guaranteed that state jobs and, notably, oil rents would be parceled out to the three parties in proportion to voting results.

While the pact sought to guard against dictatorship and usher in democratic stability, it ensured that oil profits would be concentrated in the state. 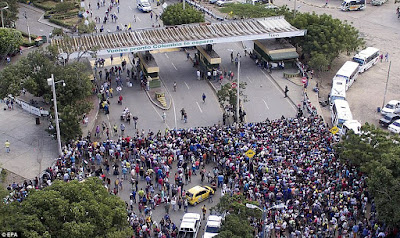 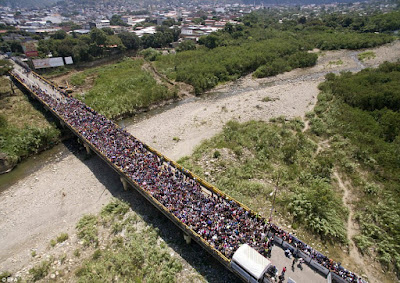 OPEC.  Venezuela joined Iran, Iraq, Kuwait, and Saudi Arabia as a founding member of the Organization of the Petroleum Exporting Countries (OPEC) in 1960. Through the cartel, which would later include Qatar, Indonesia, Libya, the United Arab Emirates, Algeria, Nigeria, Ecuador, Gabon, Angola, Equatorial Guinea, and the Republic of Congo, the world’s largest producers coordinated prices and gave states more control over their national industries. That same year, Venezuela established its first state oil company and increased oil companies’ income tax to 65 percent of profits.

The 1970s boom.  In 1973, a five-month OPEC embargo on countries backing Israel in the Yom Kippur War quadrupled oil prices and made Venezuela the country with the highest per-capita income in Latin America. Over two years, the windfall added $10 billion to state coffers, giving way to rampant graft and mismanagement. Analysts estimate that as much as $100 billion was embezzled between 1972 and 1997 alone.

PDVSA.  In 1976, amid the oil boom, President Carlos Andres Perez nationalized the oil industry, creating state-owned Petroleos de Venezuela, S.A. (PDVSA) to oversee all exploring, producing, refining, and exporting of oil. Perez allowed PDVSA to partner with foreign oil companies as long as it held 60 percent equity in joint ventures and, critically, structured the company to run as a business with minimal government regulation.

The 1980s oil glut.  As global oil prices plummeted in the 1980s, Venezuela’s economy contracted and inflation soared; at the same time, it accrued massive foreign debt by purchasing foreign refineries, such as Citgo in the United States.

In 1989, Perez—reelected months earlier —launched a fiscal austerity package as part of a financial bailout by the International Monetary Fund. The measures provoked deadly riots. In 1992, Hugo Chavez, a military officer, launched a failed coup and rose to national fame.

Chavez’s Bolivarian revolution . Chavez was elected president in 1998 on a socialist platform, pledging to use Venezuela’s vast oil wealth to reduce poverty and inequality. While his costly “Bolivarian missions” expanded social services and cut poverty by 20 percent, he also took several steps that precipitated a long and steady decline in the country’s oil production, which peaked in the late 1990s and early 2000s.

His decision to fire thousands of experienced PDVSA workers who had taken part in an industry strike in 2002–2003 gutted the company of important technical expertise. Beginning in 2005, Chavez provided subsidized oil to several countries in the region, including Cuba, through an alliance known as Petrocaribe. 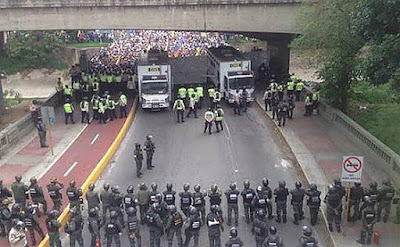 Over the course of Chavez’s presidency, which lasted until 2013, strategic petroleum reserves dwindled and government debt doubled. Chavez also harnessed his popularity among the working class to expand the powers of the presidency and edged the country toward authoritarianism: he ended term limits, effectively took control of the Supreme Court, harassed the press and closed independent outlets, and nationalized hundreds of private businesses and foreign-owned assets, such as oil projects run by ExxonMobil and ConocoPhillips. The reforms paved the way for Maduro to establish a dictatorship years after Chavez’s death.

In 2017, the government issued an indefinite ban on all protests, imprisoned political adversaries, and dissolved the National Assembly. In May 2018, Maduro secured reelection in a race that the United States and other powers condemned as unfair and undemocratic.

Is there a path away from the oil curse?

Strong democracies with an independent press and judiciary help curtail classic petrostate problems. A country that discovers a resource after it has formed robust democratic institutions is usually better able to avoid the resource curse, analysts say.

For example, strong institutions in Norway have helped the country enjoy steady economic growth since the 1960s, when vast oil reserves were discovered in the North Sea, writes Karl in her book. Today, oil accounts for 22 percent of the country’s GDP and over 80 percent of its exports. Strong democracies with an independent press and judiciary help curtail classic petrostate problems by holding government and energy companies to account.

If a country strikes oil or another resource before it develops its state infrastructure, the curse is much harder to avoid. However, there are remedial measures that low-income and developing countries can try, provided they are willing.

For instance, a government’s overarching objective should be to use the oil earnings in a responsible manner “to finance outlays on public goods that serve as the platform for private investment and long-term growth,” says Columbia University’s Jeffrey Sachs, an expert on economic development.

This can be done financially, with broad-based investing in international assets, or physically, by building infrastructure and educating workers. Transparency is essential in all of this, Sachs says.

Many countries have established sovereign wealth funds (SWF) to manage investment of revenues from their vast resource wealth. SWFs in some fifty countries managed more than $7 trillion in 2018.
Analysts anticipate that a global shift from fossil fuel energy to renewables such as solar or wind will force petrostates such as Venezuela to diversify their economies. 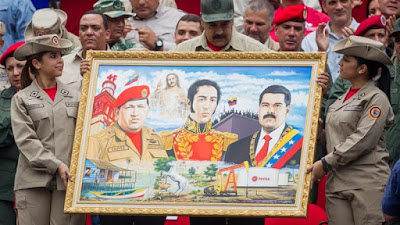 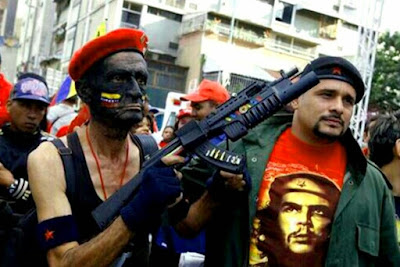 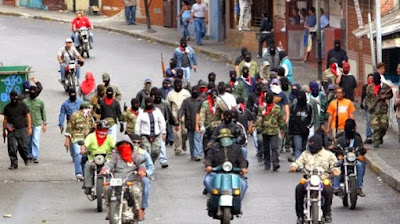