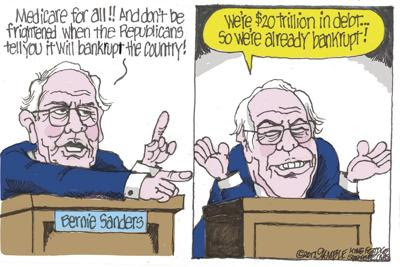 MANCHESTER, N.H. - Democratic presidential hopeful Cory Booker on Sunday delivered what he called the "hard truth" about Medicare-for-all: It will be difficult to pass, so the party should also ready more incremental changes.

His rival Sen. Kamala Harris the next day championed the Green New Deal, a sweeping climate proposal - before adding: "Some of it we'll achieve, some of it we won't." Then on Monday night, Sen. Amy Klobuchar told a young questioner at a CNN town hall that, unlike some of her fellow candidates, she would not support making four-year college free. "If I was a magic genie and could give that to everyone and we could afford it, I would," she said.

The increasingly large 2020 Democratic presidential field is fighting two simultaneous battles: a chaotic intraparty primary struggle over how far left to push their policies and a broader question of how to confront the challenge posed by President Donald Trump, who has already begun casting the Democrats as socialists.

The dynamic has put a squeeze on the Democratic candidates as they begin to lay out their messages. They are being pressed from one side by core Democratic voters hungry for leftist policies favored by the most energized activists and, from the other, by the need to court centrist voters who could be alienated by the party's turn to the left.


Trump's opportunity to define the Democratic field could be long-lasting: The president will have more than a year to portray the opposing party as radical before a Democratic nominee is selected.

The Democratic candidates' squeeze could tighten further after Tuesday's presidential announcement by Sen. Bernie Sanders, I-Vt. The entrance of Sanders, a democratic socialist and the leading champion of Medicare-for-all, could intensify the Republican criticisms and the pressure on his rivals to be more vocal advocates of single-payer health care, one of a host of social programs increasingly popular on the left.
For now, much of the Democratic cast of candidates is, if diverse by race and gender, positioned mostly on the left end of the ideological spectrum. The Democratic debate could become even more complicated in coming weeks, if candidates with more moderate political views jump into the race.

Among the moderates considering the campaign are former vice president Joe Biden and several ex-governors, such as Terry McAuliffe of Virginia and John Hickenlooper of Colorado.

The candidates are not openly fretting about the GOP attempt to paint Democrats as extremists intent on nudging the country toward socialism. But activists and voters have voiced concerns over the past week about being defined by the opposition.

"I am very worried about it because that's how Trump won," said New Hampshire state Rep. Wendy Thomas, a Democrat who attended a presidential campaign event for Sen. Booker. D-N.J., at an arcade in Manchester on Sunday. "He used that technique against all of the other candidates."

That has given Republicans, led by Trump, a chance to portray Democrats as outside the mainstream on a host of issues. As with the Green New Deal and Medicare-for-all, Republicans are taking the most extreme positions of some Democrats to paint the entire party as socialist on topics such as a wealth tax, free child care, free college and the abolition of the nation's immigration authority. 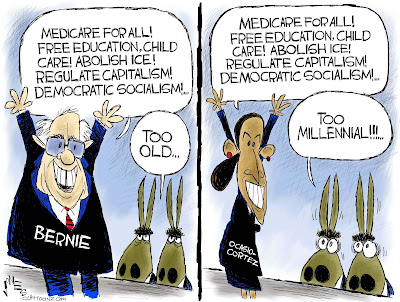 Trump campaign spokeswoman Kayleigh McEnany issued a statement Tuesday responding to Sanders' announcement, saying he had "already won the debate in the Democrat primary, because every candidate is embracing his brand of socialism." The president made a similar point in his State of the Union address earlier this month.

"We are alarmed by the new calls to adopt socialism in our country," Trump said, reviving a line of attack Republicans have sought to use against Democrats for decades. The president also has criticized the socialist government in Venezuela in ways that seem intended for a domestic audience.

On Capitol Hill, Republicans are trying to force Democrats to choose between angering liberal activists or fanning presidential scorn: Senate Majority Leader Mitch McConnell, R-Ky., has said he will schedule a Senate vote on the Green New Deal, a move designed to pressure Democratic senators to take a position. Republicans have also seized on an erroneous fact sheet distributed by staff for Rep. Alexandria Ocasio-Cortez, D-N.Y., one of the lead sponsors of the Green New Deal.

Asked by a reporter for his response to Trump's attacks on Democrats, Booker, the former mayor of Newark, emphasized his efforts at bipartisanship. "I was a guy that had to manage a city. You do that by bringing people together and governing, getting things done," he said. He added, "I'm a guy that has worked with President Trump's administration across the aisle to get things done."

At a crowded house gathering in Manchester on Sunday, Booker delivered an introductory speech stressing themes of unity, while making brief mention of health care and climate change. During a question-and-answer session, he was asked about Medicare-for-all.

"My firm belief is that we need to get to a system where everyone has access - that's why I signed onto the Medicare-for-all bill," Booker responded. "But I'm not going to be one of these presidential candidates that's not going to tell you the hard truth."

The next question Booker faced was about how to spearhead "some form of Green New Deal." The senator called for a "bold vision" on climate change and spoke in broad strokes about addressing it.

At a town-hall-style meeting in Greenville, South Carolina, on Saturday, Sen. Elizabeth Warren, D-Mass., focused heavily on her Oklahoma upbringing. The 2020 candidate did not use the words "Green New Deal" or "Medicare-for-all," even as she addressed health care in more expansive terms and touched on climate change. (Like Booker and Harris, she is a co-sponsor of both proposals.) 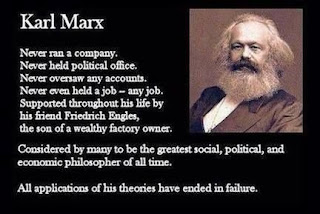 Asked how she can combat the "false news going around" that equates universal health care with "socialism or communism," Warren turned the question back on Trump. "We're caught in this moment where the very foundations of democracy are under attack," Warren said. "This is a scary moment for our country."

Warren told reporters she is not purposefully avoiding the terms "Green New Deal" or "Medicare-for-all." In her audience, there was some skepticism about the climate change proposal. "I have a sense for it," said David Danielson, 47, a substitute teacher. "I think it's like a mission statement. In some cases, it goes way too far."

At a town-hall-style meeting in Portsmouth, New Hampshire, on Monday, Harris made an expansive pitch for the presidency in her opening remarks, urging that the country "speak some truth" about the issues confronting it. She also noted her support for Medicare-for-all.

When it came to the Green New Deal, for which Harris highlighted her support during the question-and-answer session, she put it this way: "It's a resolution that requires us to have goals and think about what we can achieve and put metrics on it." In South Carolina on Saturday, Harris was careful to cast herself in the mainstream. "I care about the environment," she said. "Not because I have any desire to hug a tree, but I have a strong desire to hug a healthy baby."

Mary Montana, 75, who attended a Harris event Saturday in Columbia, South Carolina, said she was worried that Republicans are effectively using the Green New Deal to define the party as too liberal. "It's not clear what's really in it," she said. Montana also said Democrats need to worry about Republicans defining their health-care positions as too far left.

Klobuchar, D-Minn., another Green New Deal co-sponsor, sought Monday to temper expectations about achieving the proposal's specific goals. "I think that they are aspirations. I think we can get close. I don't think we are going to get rid of entire industries in the U.S.," she said in the CNN town hall in Manchester. As for Medicare-for-all, Klobuchar said, "I think it's something that we can look to for the future, but I want to get action now." She pointed to her pitch to expand Medicaid.

Sen. Kirsten Gillibrand, D-N.Y., who launched her presidential campaign last month, praised the Green New Deal, which she co-sponsors, as a "multifaceted approach" and argued that Democrats should embrace the difficult challenge of creating a "green economy."

South Bend, Indiana, Mayor Pete Buttigieg, who also joined the presidential race in January, has decided to meet some of the Republican attacks head on. He took to Twitter on Monday to argue that single-payer health care is hardly extreme. That is a debate, however, that was not likely to end soon.