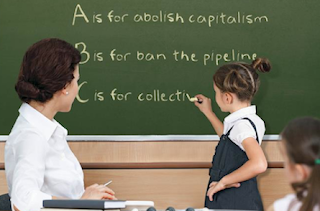 California Wants to Teach Your Kids That Capitalism Is Racist: A new model curriculum for ‘ethnic studies’ is a handbook for classroom propagandizing.

California’s Education Department has issued an “Ethnic Studies Model Curriculum” and is soliciting public comments on it until Aug. 15. The legislatively mandated guide is a resource for teachers who want to instruct their students in the field of “ethnic studies,” and was written by an advisory board of teachers, academics and bureaucrats. It’s as bad as you imagine.

Ethnic studies is described in the document as “the interdisciplinary study of race, ethnicity, and indigeneity with an emphasis on experiences of people of color in the United States.” But that’s not all it is. “It is the study of intersectional and ancestral roots, coloniality, hegemony, and a dignified world where many worlds fit, for present and future generations.” It is the “xdisciplinary [sic], loving, and critical praxis of holistic humanity.”


The document is filled with fashionable academic jargon like “positionalities,” “hybridities,” “nepantlas” and “misogynoir.” It includes faddish social-science lingo like “cis-heteropatriarchy” that may make sense to radical university professors and activists but doesn’t mean much to the regular folks who send their children to California’s public schools. It is difficult to comprehend the depth and breadth of the ideological bias and misrepresentations without reading the whole curriculum—something few will want to do.

Begin with economics. Capitalism is described as a “form of power and oppression,” alongside “patriarchy,” “racism,” “white supremacy” and “ableism.” Capitalism and capitalists appear as villains several times in the document.

On politics, the model curriculum is similarly left-wing. One proposed course promises to explore the African-American experience “from the precolonial ancestral roots in Africa to the trans-Atlantic slave trade and enslaved people’s uprisings in the antebellum South, to the elements of Hip Hop and African cultural retentions.”

Teachers are encouraged to cite the biographies of “potentially significant figures” such as Angela Davis, Frantz Fanon and Bobby Seale. Convicted cop-killers Mumia Abu-Jamal and Assata Shakur are also on the list. Students are taught that the life of George Jackson matters “now more than ever.” 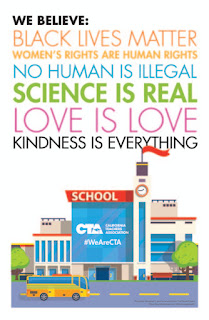 Jackson, while in prison, became “a revolutionary warrior for Black liberation and prison reform.” The Latino section’s people of significance include Puerto Rican nationalists Oscar López Rivera, a member of a paramilitary group that carried out more than 130 bomb attacks, and Lolita Lebrón, who was convicted of attempted murder in a group assault that wounded five congressmen.

Housing policy gets the treatment. The curriculum describes subprime loans as an attack on home buyers with low incomes rather than a misguided attempt by the government to help such home buyers. Politicians—Republicans and Democrats—imposed lower underwriting standards on the home-loan industry. Republicans billed it as a way to expand the middle class, while Democrats crowed that it would aid the poor.

In a sample lesson on Native Americans, the curriculum suggests students offer their responses to a fictional environmentalist speech by Chief Seattle as well as an anodyne quote about relationships from the recently deceased rapper Nipsey Hussle. The Chief Seattle error is part of a larger problem.

The curriculum perpetuates the myth that the Indians had the same values as present-day ecologists. In truth, Native Americans had a mixed approach to nature. The curriculum writers should have looked carefully at the scholarly evidence presented in Shepard Krech’s 1999 book, “The Ecological Indian”—about, for example, the setting of brush fires that got out of control and the needless killing of buffalo, beaver and deer.

The curriculum lauds bilingual education, but it omits that this program—in which teachers conducted class mostly in Spanish until seventh grade—failed in California and was disliked by much of the Latino community.

The curriculum is entirely wrongheaded when it comes to critical thinking. Critical thinking is described not as reasoning through logic and consideration of evidence but rather a vague deconstruction of power relationships so that one can “speak out on social issues.”

Thinking critically “requires individuals to evaluate phenomenon [sic] through the lens of systems, the rules within those systems, who wields power within systems and the impact of that power on the relationships between people existing within systems.”

(Mr. Evers is a research fellow at Stanford University’s Hoover Institution. He served as assistant secretary of education for planning, evaluation, and policy development during the George W. Bush administration.) 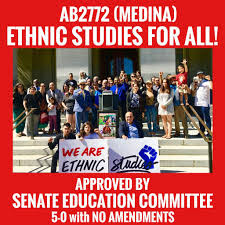