(Alex Vasquez's article from the BLOOMBERG NEWS on 05 August 2019.)

(Bloomberg) -- Carmen Rojas used to be one of the fortunate Venezuelans who lived off a steady flow of money from relatives abroad, with $150 from her two sons providing enough cash to last a month. Today, she’s lucky if that amount gets her through the week.

Luxuries like trips to restaurants and the movies are long gone. The 65-year-old homemaker gave up meat and now mostly eats arepas -- a corn patty staple -- with lentils and beans. The owner of two stray dogs, a third of her monthly intake is eaten up by them alone. “Two years ago, I lived like a queen,” Rojas said. “Today, I barely leave my house.”

Venezuela’s rampant inflation, which helped sink the country into deep poverty in recent years, is now also squeezing the growing number of people who get by on the remittances sent by relatives living abroad. What once provided a lifeline -- and even extra spending money -- now can scarcely cover the basics in a country in the midst of economic collapse.


Why? Because the government imposed austere measures to stabilize its foreign exchange rate, helping keep the bolivar relatively steady against the dollar while consumer prices continued to climb in Caracas. So a cup of coffee, for instance, that cost the equivalent of $0.51 in late January had soared to $1.02 by late June.

“The problem with those who depend on remittances is that since inflation is rising faster than devaluation, purchasing power is less and less,” said Asdrubal Oliveros, director of the Ecoanalitica research firm..

Venezuelans have increasingly been relying on dollars from abroad as the country’s economic system spirals. Almost a third of the country’s families depend on remittances to survive, according to the latest data from Caracas pollster Datanalisis, up from just 5.2% in 2017.

Hyperinflation and shortages of basic necessities, including medicine, have sent roughly 4 million citizens fleeing the country, according to the latest figures from the United Nations. Many of them are then sending funds home to desperate family members.

But the value of those remittances have plummeted. Between June 2018 and June 2019 the cost of living in dollars has risen 545%, said Oliveros, whose firm tracks the dollar value of a monthly basket of goods. As a result, living in Venezuela these days can be as expensive or more so than in the U.S. A jar of peanut butter that costs about $5 in the U.S. is sold for $15 in the oil country. 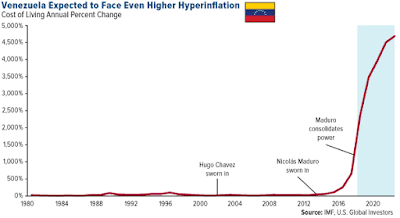 Gabriel Chollet, an 18-year-old law student, lives on the $35 a month his mother and his brother send from Peru and Chile. The money is barely enough to buy some vegetables, beans and, sometimes, sardines for a week.

“They don’t make much money -- he washes cars and she’s a waitress,” Chollet said from the Guarico state slum where he lives, in central Venezuela. “A year ago, I managed to buy food for a month. Today, everything is more expensive.”

The printing of bolivars to finance a massive budget deficit fueled six-digit inflation and destroyed the local currency. Attempts to relaunch the currency by cutting off zeroes and printing new bills failed on multiple occasions after just months.

With Nicolas Maduro’s government teetering economically and politically, authorities have looked the other way at the adoption of the U.S. greenback as an accepted form of payment. Dollar bills are seen both in street markets and fancy restaurants, while foreign credit cards are widely accepted.

In an effort to contain the inflationary pressures, the central bank imposed draconian reserve requirement limits that effectively force banks to lock up all of their excess bolivars to severely limit liquidity. That’s caused a shortage of bolivar bills and prompted Venezuelans to lean even more on the dollar. In parallel, the official and black market exchange rates merged for a time and held steady after years of depreciation.

The government’s policy has shown signs of working, albeit at the cost of further strangling an economy that’s been atrophying for years. The annual inflation rate tumbled to 34,900% from 224,900% at the end of last year, according to Bloomberg’s Cafe Con Leche Index.

But still, it hasn’t slowed inflation as much as the rate of the bolivar’s declines. “Even if reserve requirements have slowed down inflation, it’s done so by shrinking production,” said Luis Vicente Leon, head of polling company Datanalisis.

While you can find many expensive imported goods straight from the U.S. these days, local industry has been decimated. A chocolate bar made in Venezuela can cost twice as much as one imported from the U.S. A couple of years ago, eating imported chocolate was a luxury. 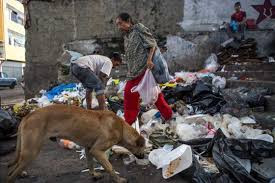 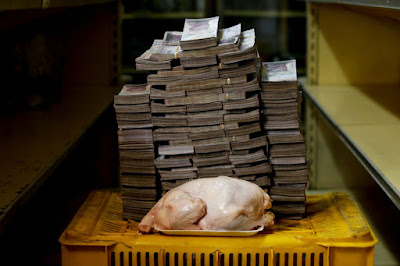 In a country where salaries can pay as little as $4 a month, dollars are increasingly crucial. The average amount that a family receives in remittances has almost doubled to $110 per month in the past year, and total flows may reach $3 billion this year, according to Datanalisis.

But that won’t get very far. The monthly price for a basket of goods needed to support a family of five was some $200 in June, according to the Caracas research group Cenda.

“When I have to buy medicine, I have to text my sons and all my relatives abroad, because I simply can’t afford it,” Rojas said while painting a wooden cup holder that she’ll try to sell to friends and neighbors for extra cash. “It’s embarrassing.” 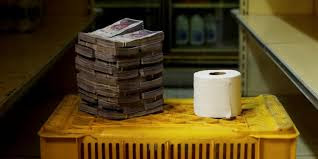 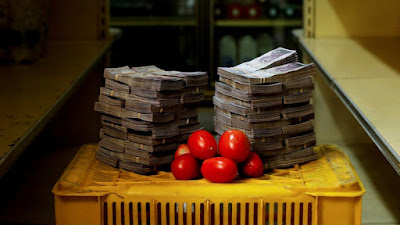 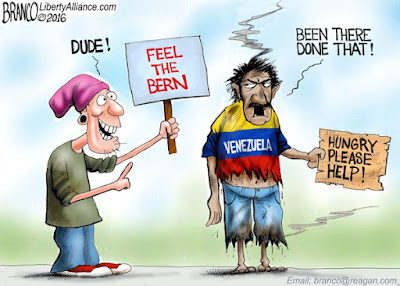 Related posts at following links:
Children Are Paying Horribly For Failed Socialist Experiment In Venezuela.
Posted by Hla Oo at 10:08 AM