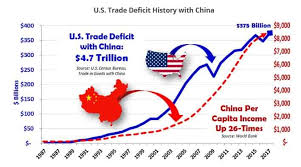 There is one simple truth in this trade war between the United States and China the legacy media (fake news) just does not want you to understand, but President Trump has understood from the beginning — we have not had free trade in decades.

What we have experienced is unfair trade, which has allowed other nations to almost overtake America in economic dominance, which was of course the plan all along. China has excelled at using mercantile policies to fuel its rapid industrial growth at the expense of the average American citizen and his economic well being.

The globalists all promised that once China joined the World Trade Organization (WTO), all would be good with the world and free trade. Exactly the opposite has happened — China has manipulated the world which has allowed its deadly communist poison to spread, threatening free people around the globe.


You can see the legacy, globalist media preaching these lies daily as they rail against the President’s attempts to tame the Chinese behemoth and protect the future of America. The so-called ‘business channels’ of the corrupt media are the worst, shamelessly pushing the deceitful, globalist agenda like a crack pusher in the inner city, immune to the plight of those hard-working patriots in Middle America.

Take the headline above from Bloomberg, declaring support for ‘free trade’ is up amongst the population. The headline is a lie — of course people want free trade. However, as we pointed out above, we have not had free trade since China joined the WTO.

Bloomberg knows this, they are just pushing a false narrative. This is a classic example of the agenda of world elites — lie to the average voter in order to further corporate gains, all the while accountable to no one.


You see, globalists are fine with Americans living as slaves to the Chinese economy, it matters to them not one bit. They will still fly their private jets to Davos to plan your future, while you are asking customers, ‘do you want fries with that’, instead of building a future for your family with a good manufacturing job. Don’t listen to them.