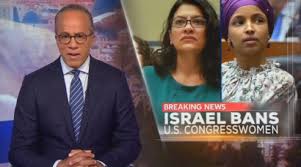 “The decision has been made, the decision is not to allow them to enter,” Israeli Deputy Foreign Minister Tzipi Hotovely told Israel’s Reshet Bet Radio. Shortly before the announcement, President Trump urged Israel to ban the freshman lawmakers — the first two Muslim women elected to Congress and two of Israel’s sharpest critics.

“It would show great weakness if Israel allowed Rep. Omar and Rep. Tlaib to visit. They hate Israel & all Jewish people, & there is nothing that can be said or done to change their minds,” Trump tweeted. “Minnesota and Michigan will have a hard time putting them back in office. They are a disgrace!” he added.


The lawmakers – who along with Reps. Alexandria Ocasio-Cortez, D-NY, and Ayanna Pressley, D-Mass., comprise “The Squad in Congress – back the Palestinian Boycott, Divestment, Sanctions movement, which calls for boycotts, divestment and sanctions against Israel.

Prime Minister Benjamin Netanyahu defended the announcement by Interior Minister Aryeh Deri by saying Israel is a “vibrant and free democracy” that is open to criticism of its policies, but “with one exception.”

The decision was made by Netanyahu, Foreign Minister Israel Katz and Minister of Strategic Affairs Gilad Erdan. “The State of Israel respects the US Congress, as part of the close alliance, but it is inconceivable that anyone who wishes to harm the State of Israel will be allowed, even during the visit,” a press statement said. Israel accused the two US lawmakers of “taking advantage” of their prominent political position “to support organizations that call for boycotts of Israel,” according to the statement.

Omar (D-Minn.) and Tlaib (D-Mich.) planned to tour the flashpoint site of the Temple Mount in the Old City of Jerusalem, as well as the West Bank, according to Channel 13. Their trip was planned by Miftah, a nonprofit organization led by Palestinian lawmaker and veteran peace negotiator Hanan Ashrawi, according to the Washington Post. 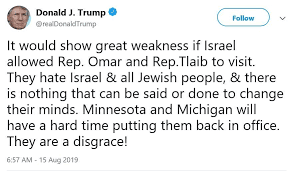 The move to bar the progressive lawmakers from visiting the close US ally appeared to be unprecedented — and marked a dramatic escalation of Israel’s campaign against the BDS movement. In July, the Democratic-led House voted overwhelmingly in favor of a resolution against the movement.

On Thursday, congressional lawmakers wasted no time in assailing Israel’s decision. AOC said lawmakers “are frequently asked to visit Israel to ‘see things for ourselves. But Netanyahu choosing to ban the only 2 Muslim women in Congress from entering tells the US that only *some* Americans are welcome to Israel, not all. Trump is exporting his bigotry &making matters worse,” she added.

Rep. Jerrold Nadler, D-NY, said in a statement: “It is utterly egregious for the Israeli government to deny entry to two sitting members of the United States Congress. The close relationship enjoyed by the United States and Israel should extend to all its government representatives, regardless of their views on specific issues or policies.

“This decision undermines the ability for our two allied countries to have the frank, open and, at times, difficult discussions that we must have in order to ensure Israel remains a secure and democratic nation,” Nadler added.

“I strongly condemn this decision and urge the Israeli government to allow entry to these Congresswomen and welcome them in the respectful, dignified manner to which they are entitled as official representatives of the United States.”

Sen. Chuck Schumer said that “denying entry to members of the United States Congress is a sign of weakness, not strength. “It will only hurt the U.S.-Israeli relationship and support for Israel in America. No democratic society should fear an open debate. Many strong supporters of Israel will be deeply disappointed in this decision, which the Israeli government should reverse,” the Senate minority leader said in a statement.

Pressley, D-Mass., lashed out in a tweet. “I’m calling this like I see it: bigoted, short sighted and cruel,” she said. “Any leader committed to advancing democracy would welcome with open arms two democratically elected United States Congresswomen. And every single member of Congress should be calling this out.”

House Majority Leader Steny Hoyer, D-Md., who discussed the planned trip with Israeli officials on Wednesday on behalf of the Democratic leadership, called the decision “outrageous.” “This action is contrary to the statement and assurances to me by Israel’s ambassador to the United States that ‘out of respect for the US Congress and the great alliance between Israel and America, we would not deny entry to any Member of Congress into Israel.’ That representation was not true,” he said in a statement.

“I call on the Prime Minster to reconsider this decision and ensure that all Members of Congress who wish to visit Israel and/or the West Bank will be received with the proper respect and recognition they are due,” he added.

Rep. Nita Lowey, D-NY, chairwoman of the powerful Appropriations Committee, called it a dangerous development that only empowers “those who seek to create a wedge between our two countries,” according to The Hill.

A few Democratic presidential hopefuls, including Sens. Bernie Sanders of Vermont and Elizabeth Warren of Massachusetts, also raised objections. “Israel doesn’t advance its case as a tolerant democracy or unwavering US ally by barring elected members of Congress from visiting because of their political views,” Warren said in a tweet.

“This would be a shameful, unprecedented move. I urge Israel’s government to allow @IlhanMN and@RashidaTlaib entry,” she added. Sanders said in a tweet: “Banning Congresswomen Omar and Tlaib from entering Israel and Palestine is a sign of enormous disrespect to these elected leaders, to the United States Congress, and to the principles of democracy. The Israeli government should reverse this decision and allow them in.”

Meanwhile, the American Jewish Congress told The Post in a statement that it understands Israel’s decision. The AJC “has strongly opposed the anti-Semitic and Israel-bashing rhetoric voiced by US Congresswomen Rashida Tlaib and Ilhan Omar,” it said. “It is Israel’s sovereign decision to not allow the entry of those who support boycotting the state of Israel, and support organizations whose leaders have some known ties to terrorist groups.

AJC President Jack Rosen said: “Congresswomen Tlaib and Omar are no friends of Israel. Had they shown a genuine desire to commit to open and honest dialogue, they could have better understood the true character of the Israeli people and the reality in which they live on a daily basis. But sadly this is not the case, and the Israeli government’s decision is the right one,” he said in a statement.

Trump — who has criticized the congresswomen on Twitter in an apparent effort to cast their hard-left views as the face of the Democratic Party — was unhappy with Israel’s original decision not to bar them, according to Channel 13.

White House press secretary Stephanie Grisham has denied that Trump had ever given any kind of directive to the Israelis. “The Israeli government can do what they want. It’s fake news,” Grisham told Axios. Denying entry to the congresswomen could further strain relations between Netanyahu, who has highlighted his close ties with Trump, and the Democratic leadership in Congress. 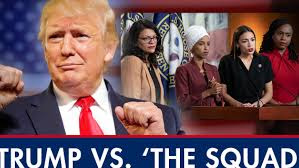 (Bloggers Notes: Trump’s strategic move to push the Democrats away from the Israel and American Jewry has been working brilliant and this could be the beginning of the end of Democratic Party as we know it for a very very long time. Israel as a great nation will survive but I doubt the Democrat Party will.)