Pelosi & Her Hapless Deputies Cornered by The SQUAD

(Matthew Boyle’s article from the BREITBART NEWS on 19 August 2019.) 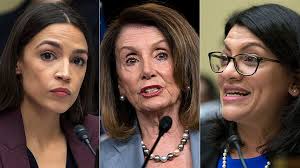 In fact, at least seven of Pelosi’s top confidantes–committee chairs–potentiallly face the same fate as Crowley, as primary challengers have announced campaigns against them. One powerful Pelosi deputy who faces a primary, Rep. Nita Lowey (D-NY)–the chairwoman of the House Appropriations Committee–has not faced an internal party challenge since 1988.

Roll Call’s Jennifer Schutt wrote on Monday: The year was 1988. Def Leppard topped the charts and stonewashed jeans were all the rage. It was also the last time powerful House Appropriations Chairwoman Nita M. Lowey faced a primary challenge. That’s all changed now with the decision by Mondaire Jones, a former Obama administration Justice Department staffer and attorney for Westchester County’s Law Department, to challenge Lowey in next June’s primary.


The 32-year-old political novice plans to take on the New York Democratic incumbent over her positions on issues ranging from climate change to student debt forgiveness to oversight of the Trump administration. Schutt continued her piece by quoting Jones, who compared the race against Lowey to Ocasio-Cortez’s victory over another Pelosi confidante:

Jones hopes the same sentiment that propelled young progressives to victory in the last election cycle — with Rep. Alexandria Ocasio-Cortez’s defeat of longtime New York Democrat Joseph Crowley the most famous example — will resonate with voters throughout New York’s Rockland and Westchester counties.

“The conventional wisdom dictated that people like me — young people, people of color — had to wait their turn, that they had to accept the opportunities that were given to them instead of putting themselves out there and letting the voters decide,” Jones said in an interview.

While Lowey has her hands full fighting off the primary challenge back home, she is hardly the only one of Pelosi’s close allies–members of Congress do not become committee chairs unless they are loyal foot soldiers for the Speaker’s agenda–under fire from the left facing primary challenges in their districts. Schutt continued her piece by noting several other committee chairs in Pelosi’s majority are facing primaries too. Schutt wrote:

All are facing primary challengers this year. The same goes for Transportation and Infrastructure Chairman Peter A. DeFazio of Oregon, first elected in 1986; Agriculture Chairman Collin C. Peterson of Minnesota, first elected in 1990; and even Judiciary Chairman Jerrold Nadler of New York, the party’s point man on impeachment proceedings, who came to Congress after a 1992 special election.”

If even one of these seven committee chairs falls to a primary challenger, it would be cataclysmic in official Washington. People this close to the power of a House Speaker are theoretically supposed to be safe from such things, at least in their own parties, but with the rise of the anti-establishment left inside the Democrat conference–led by the “Squad” but followed by many others, including in particular the broader Congressional Progressive Caucus–the leadership has been caught off guard by surging leftist activism pushing political and policy priorities far outside the American mainstream.

The swift takeover of the Democrat Party that Ocasio-Cortez and her comrades have engineered may have deep consequences for the party nationally. President Donald Trump has sought to accelerate her rise inside the Democrat Party, to great success, in order to force the party further to the left and away from solutions on issues voters care about like healthcare, infrastructure, immigration, family leave, the economy, and more.

Instead, Democrats are now consumed with an agenda filled with antisemitic hatred of Israel, as well as open borders and anti-immigration enforcement sentiments; support for a government takeover of healthcare that even 2020 hopeful Sen. Bernie Sanders admits would eliminate union health plans; higher taxation; a climate and environmental policy that would destroy American energy production, and many more extreme agenda items.

It’s happening in Congress, but also in the 2020 Democrat presidential primary field, where in debates even former Vice President Joe Biden has taken positions even Barack Obama would not take as president, such as providing government-funded healthcare plans to illegal aliens.

Donald Trump tweeted: House Democrats want to take action against Israel because it is fighting back against two (maybe four) people that have said unthinkably bad things about it & the Israeli people. Dems have such disdain for Israel! What happened? AOC Plus 4 is the new face of the Democrat Party!

Having these primaries looming over these top Pelosi allies’ heads like the Sword of Damocles for the next year will make it next to impossible for Democrats to come to the table with Trump and Senate Republicans on any meaningful issues.

House Minority Leader Kevin McCarthy made the point in a Breitbart News hourlong radio exclusive earlier this month that Democrats have already failed to accomplish anything since taking the majority.

“Look at what the policies this new socialist Democrat party is doing,” McCarthy said. “They want to one, their first most important bill—when you become the majority, you reserve the first ten numbers for your most important bills—so their most important bill, H.R. 1, was to take your taxpayer money and give it to their campaigns. Literally, tax the American public and give them thousands of dollars for their own campaigns.

“Then they have what is called Medicare for None. Medicare for None would take 180 million people’s healthcare away while at the same time bankrupt those who are currently on Medicare. It’s more government control. That’s what I really believe this future election will be about: Socialism versus freedom. Control versus freedom. They just want greater control over our lives.”

But with Trump and Senate Republicans standing in the way of these newly radicalized Democrats controlling the House majority, their agenda is unlikely to ever make it into federal law. That prospect of continued House Democrat failure to govern has Republicans salivating, as Democrats’ more moderate members–the ones they needed to win in 2018 to take the majority–are being hung out to dry by the leftist flank of the party.

“There are 31 seats that Democrats sit in today that President Trump carried,” McCarthy said in his Breitbart News radio special earlier this month. “Of those 31, 13 of them President Trump carried by more than six points. So, here you have the socialist wing of the party trying to take them further left, when the only way they have the majority is actually winning in Republican areas—areas that would be swing districts.”

Pelosi spent part of earlier this year squabbling with members of the “Squad,” only to later come to their rescue, putting them in the driver’s seat in terms of what gets on the House floor and what does not and setting the agenda for not just the Democrat conference but the whole national Democrat Party as well.

Now, it turns out, she may not have any choice but to stick with the “Squad” moving forward as her own deputies are under fire. Whispers of Democrat primary challenges against “Squad” members have faded away, but Pelosi’s own friends are in danger–and she may not be able to rescue them. 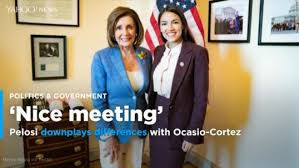 
Because of these government-supervised-and-funded Primary elections most political candidates are forced into either Republican or Democratic camp. The Primary elections strictly enforce a rigid two party system - the status quo of the ruling class like Bushes and Clintons - in the United States.

The primaries are the main reason the estabishment Democrats led by Pelosi and her deputies are now haplessly surrounded, cornered, and eventually replaced by the minority-majority like the SQUAD led by AOC plus Three.

The rising popularity of so-called Democratic Socialists such as Latino Ocasio-Cortez mainly due to the massive inflow of left-leaning Latinos and Islamist-Muslims into the major cities like New York and LA will eventually implode the Democratic Party, I believe, unless US abolishes the Primary and relaxes rigid two party electoral system.)