China’s high-stakes retaliation measures, which could put Chinese businesses at risk, are aiming to diminish Trump’s chances in 2020 so China could eventually have a Democratic leader to negotiate an easier deal. China may go further than many expect to win the trade war and in the process increase the odds President Donald Trump is a one-term president, according to global investors.

From suspending U.S. agricultural product purchases to weaponizing the yuan, these high-stakes measures, which could put Chinese businesses at risk, are a preview of how far China could be willing to go economically to get a long-term deal in its favor.


“Many investors have expressed the view that China is prepared to accept an economic downturn (and thus a global economic downturn) to prevent President Trump’s reelection,” Naka Matsuzawa, Nomura’s chief rates strategist in Tokyo, said in a note Wednesday following meetings with Asian clients.

To retaliate against Trump’s surprise tariffs threat last week, China struck back swiftly by halting purchases of U.S. agricultural products, which particularly hurts farmers in the Midwest — states that are crucial for Trump’s presidential win in 2020.

“China could also further curb purchases of agricultural goods, possibly as a means of undermining Trump’s support base among rural voters ahead of the November 2020 presidential election,” Mark Haefele, UBS’ global chief investment officer, said in a note Tuesday.

In its latest move to weaponize the yuan, China is taking a big risk as the devaluation would lead to an exodus of capital, but it’s also a sore spot for Trump as he has repeatedly protested the strong dollar.

“China might be tempted to wait for a change of leadership in Washington,” David Bianco, DWS Group’s chief investment officer, said in a note Tuesday. “If necessary, China might react with targeted measures designed to endanger Trump’s re-election, even at the risk of collateral damage to the global economy and financial markets.”

Trump knows it all too well that this is China’s intention. He warned recently that China could get a much tougher deal if and when he gets re-elected. Donald J. Trump tweeted on 30 July 2019:

“..My team is negotiating with them now, but they always change the deal in the end to their benefit. They should probably wait out our Election to see if we get one of the Democrat stiffs like Sleepy Joe. Then they could make a GREAT deal, like in past 30 years, and continue... 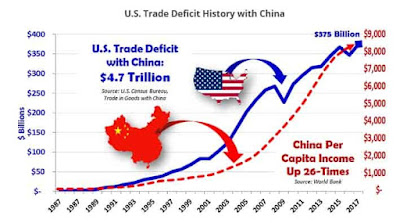 “...to rip off the USA, even bigger and better than ever before. The problem with them waiting, however, is that if & when I win, the deal that they get will be much tougher than what we are negotiating now...or no deal at all. We have all the cards, our past leaders never got it!”

China’s strategy could backfire, however. Since hard-line measures against China can win support from both parties, the next president could take a similar stance, Matsuzawa said. Additionally, the further deterioration in China’s growth could be dangerous by destabilizing the country, which is already dealing with growing protests in Hong Kong. China’s second-quarter GDP growth was the slowest year-on-year increase for a quarter in at least 27 years.

“A downward shift in China’s potential growth rate means that the debt deflation problem could come out into the open,” Matsuzawa said. Normally a further slowdown would cause the government to unleash a large stimulus to get the economy growing again, but there’s a chance it could not act as aggressively as it has in the past.

The Chinese central bank on Monday denied rumours that it decided to cut the benchmark interest rate of RMB loans and deposits of financial institutions. In a post on Chinese messaging app WeChat, the People’s Bank of China said the news is untrue and it has reported the situation to the police for investigation. The denial may have had a hand in causing global equities to drop further Wednesday. 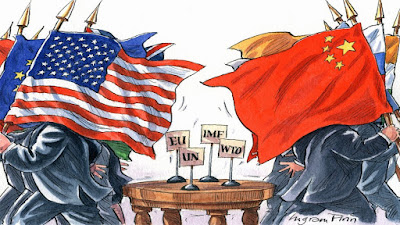