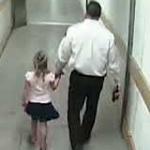 Shopping centre guard sentenced over 'haunting' stairwell assault of three year old: A Sydney judge has described the actions of a shopping centre security guard, who indecently assaulted a young girl in a locked stairwell, as extremely audacious and haunting before jailing him for at least two-and-a-half years.

The three-year-old girl was inside DFO Homebush a week before Christmas 2016 when Mohammad Hassan Al Bayati, 30, took her by the hand and led her to a fire exit. He had been responding to a report the girl was unattended and distressed at the centre's playground.

After receiving sexual gratification, he returned the girl to the playground and berated the waiting mother (for leaving her young daughter unattended) . A jury found Mohammad Al Bayati exposed his genitals and touched the girl’s underwear during the 11 minutes they spent in the stairwell.

The family earlier this month spoke of the torment the incident has caused, with both parents telling the court they had gone through bouts of depression. "Our peaceful family life was destroyed and will never be the same again," the girl's mother said in a statement to Sydney’s Downing Centre District Court. "We are so proud she was able to tell the police, however it was a dramatic event for her."


Mohammad Al Bayati has always denied the crimes, but a jury found him guilty of kidnapping, indecency and indecent assault charges. His DNA had been found on the girl’s underwear.

NSW District Court Judge John Pickering on Tuesday said the girl had been "quite remarkable" to report the crimes, and jailed the guard for four-and-a-half years with a non-parole period of two-and-a-half years.

The judge considered Al Bayati's brutal upbringing in Iraq and the 10 months he spent on Christmas Island and an asylum seeker. During sentencing, Pickering told the court "any mother should be entitled to leave their children in a shopping centre and have the expectation someone who was there to look after people” would not harm them.

Pickering described Al Bayati's actions as extremely audacious and said they could never fully be understood because the people who commit such offences have "a thought process way outside" the rest of society. CCTV played in court showed the girl playing happily on the slides and not seeming concerned about her mother not being present.

What happened next was found to be undoubtedly haunting to the jury "as it was haunting to me", Pickering said. Security vision showed Al Bayati lead the girl by the hand to an area of the shopping centre where cameras were nowhere in sight. “The audacity to commit an act of sexual gratification (was) ... an incredibly risky and extraordinary move," Pickering told the court. 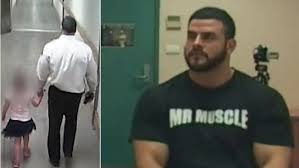 Security guard Mohammad Hassan Al Bayati was on Tuesday sentenced to four-and-a-half years in prison for taking the unsupervised girl from the DFO Homebush playground a week before Christmas in 2016. The Iraqi-born man, who still denies the crimes, was in Australia on a permanent protection visa after seeking asylum in 2011.

But Home Affairs Minister Peter Dutton on Thursday said his visa has been cancelled and he will be deported once his time behind bars ends. "This individual didn't come as a welcome guest - he came by boat when Labor lost control of the borders," Mr Dutton told 2GB radio. "Good riddance to him and people like him."

Prime Minister Scott Morrison said Al Bayati had "no right" to be in Australia and said it should serve as a warning to anyone on a permanent protection visa who breaks the law. "His abuse of the generosity of a country that gave him a new start, it is absolutely appalling," he told the Seven Network on Thursday.

By law, the minister - or delegate - must cancel a person's visa if they have been convicted of a sexual crime involving a child and serving a full-time prison sentence for the crime. Mr Dutton said Al Bayati had the right to appeal the decision in court, but he was confident it would stand up.

Shadow attorney-general Mark Dreyfus agreed there was no place for Al Bayati in Australia, describing his crimes as "abominable". But he hit back at suggestions that Labor was somehow responsible because he arrived in the country under their watch.

"Many thousands of people are in Australia, sitting here on a visa issued by Mr Morrison personally as immigration minister. Is he accepting responsibility for all of their conduct and all of their behaviour for so long as they remain in Australia?" Mr Dreyfus told reporters in Canberra.

Mohammad Al Bayati, who was working as a security guard at the shopping centre, had responded to a report of an unattended and distressed girl at the centre's playground when he took the girl by the hand and walked her towards the fire exit. There, he exposed his penis and touched the girl's underwear during 11 minutes away from surveillance cameras. Police only became involved after the girl told her father later that day the guard showed her his "needle" and "tried to kiss my bum bum".

During Al Bayati's sentencing, the NSW District Court was told he spent years as a child in Iran as an undocumented asylum seeker before being kidnapped by terrorists on his return to Iraq, where he saw a fellow abductee beheaded.

He then made his way to Malaysia and attempted to reach Australia by boat, which ended up sinking in the Indian Ocean, the court was told. He spent time on Christmas Island before eventually being granted a permanent protection visa. Al Bayati will be eligible for parole in mid-2021.

Prime Minister Scott Morrison has weighed in on the case of a convicted child sex offender, saying the Federal Government will "punt" him. On Tuesday, 30-year-old Iraqi-born Mohammad Hassan Al Bayati was sentenced for the sexual assault of a three-year-old girl in December 2016.

He was working as a security guard at the Homebush DFO shopping centre in western Sydney, when he took the girl away from the centre's playground while her mother was Christmas shopping. Security camera vision shows Al Bayati taking the girl into an area without surveillance, where he assaulted her.

The New South Wales District Court sent Al Bayati to jail for four-and-a-half years' jail, with a non-parole period of two-and-a-half years. He came to Australia by boat from Iraq in 2011, and was given a permanent protection visa to stay.

"This bloke has no right being here, he's abused the generosity of a country that gave him a new start, and it was absolutely appalling," Mr Morrison told Channel Seven. "And just because you're on a permanent protection visa, it's a warning to anyone. We'll cancel it, and we'll punt you."

Mr Morrison noted that laws he was responsible for as immigration minister, under then prime minister Tony Abbott, made it mandatory for non-Australian citizens to have their visas cancelled if they were convicted of a crime carrying a punishment of more than a year in jail. The Prime Minister said some 4,000 convicted criminals had been kicked out of the country under the legislation.

Al Bayati will serve his sentence in Australia, before being deported. it is unclear whether there will be any hurdles in deporting Al Bayati back to Iraq, and whether Iraq would accept him back. Previous attempts to kick convicted criminals out of the country have been met with legal challenges through the Administrative Appeals Tribunal (AAT), and subsequent appeals through higher courts.

Shadow Attorney-General Mark Dreyfus said the law was clear that there was no place for someone who had committed such crimes to remain in Australia. But he took exception to any suggestion from the Coalition that Labor was somehow responsible for the situation, given Al Bayati arrived while the party was in government.

PM Scott Morrison stated that previous Labor governments had given away Permanent Protection Visas “Willy-Nilly” to tens of thousands of illegal boat persons (like Mohammad Al Bayati) without any background checks.

"He seems to be implying that immigration ministers have to foresee the future," he said. "And if he is saying that, then he needs to be considering whether he's accepting responsibility for every single one of the thousands of arrivals in Australia, who he as Immigration Minister, issued a visa to."

Prime Minister Scott Morrison has warned refugees in Australia they will be deported if they commit crimes, vowing to "punt" an Iraqi refugee who indecently assaulted a child.

Mr Morrison delivered the strong warning after the government cancelled the permanent protection visa of Sydney security guard Mohammed Hassan Al Bayati under laws that allow the government to kick out foreign criminals.

The 30-year-old, who arrived in Australia by boat in 2011, was sentenced to four and half years' jail on Tuesday who kidnapped and indecently assaulted a three-year-old girl. "This is a sickening crime and this person has no business being in this country," Mr Morrison told the Today show on Thursday morning.

The government has been cracking down on foreign criminals, but it is rare to try to send a refugee back to a country where they face persecution or serious harm.  Mr Morrison said that is no reason not to be deported, suggesting Labor had given out protection visas "willy-nilly" when tens of thousands of asylum seekers arrived by boat.

"Just because you’re on a protection visa, it’s a warning to anyone, we’ll cancel it and we’ll punt you," Mr Morrison told Sunrise. "This bloke has no right being here. He’s abused the generosity of the country that gave him a new start. And it was absolutely appalling."

Al Bayati will serve at least two and a half years in an Australian jail, before being moved to an immigration detention centre ahead of deportation.  The prime minister targeted the Iraqi refugee as the government ramps up efforts to deport more foreign criminals.

Since the character test was tightened in 2014, the government boasts it has kicked out 4,000 visa holders who have committed crimes and been sentenced to at least 12 months jail. The government is now proposing to further strengthen the character test to allow it to deport anyone who commits a crime carrying a sentence with at least two years in prison, regardless of whether any jail time is imposed on the offender.

Al Bayati can appeal the decision, but Home Affairs Minister Peter Dutton was confident he would not be successful. "Good riddance to him and people like him," Mr Dutton said. 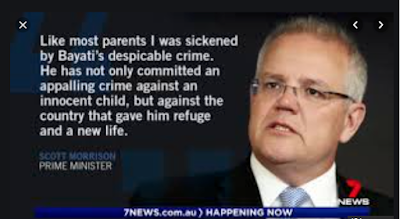