(Based on the PYAE AYE’s posts from his Facebook pages in February-March 2021.) 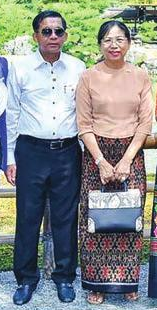 Recent news coming out from the foreign diplomats circle in Rangoon are indicating that Senior General Min Aung Hlaing the military dictator is in the tight grip of severe depression and wavering from the unexpected public resistance against his power grab.

According to some diplomats many senior army divisional commanders have contacted them through confidential channels and conveyed their disappointments and sadness over power-mad Min Aung Hlaing’s foolish February-1 Coup.

They also informed the diplomats that after UNSC’s unanimous decision condemning the Coup Min Aung Hlaing and his senior deputy generals have moved into the North-Korean-built underground tunnel between Nay-pyi-daw and Pindaya and hiding there, but abandoning their families still trapped in their palatial houses in Nay-pyi-daw.

The commanders also agreed to the diplomats that they were willing to provide vital information on the troop strength, location, technologies and arms equipped with a single condition that they would be kept at their current ranks and positions once NLD Government is back in the power.

No wonder the dictator MAH has stopped giving speeches and appearing on the TV. He definitely is depressed and hopelessly wavering. Even his wife Kyu Kyu Hla has posted a public appeal to people of Burma after her businessman son and businesswoman daughter and their businesses were sanctioned by the US Government. And they both have been constantly under attacks from the “Social Punishment” campaign by the people of Burma. 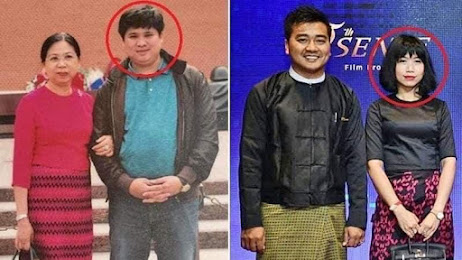 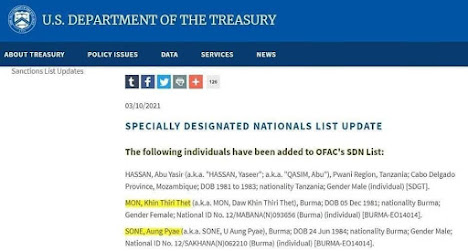 After the United States has sanctioned her two children, Kyu Kyu Hla posted the following appeal, translated from the original post in Burmese, on her Facebook account.

To the dear people of Myanmar,

I am writing this letter not as the wife of the Military-Chief but as a common mother and a former university teacher. Kindly read it to the end, please.

I have recently deactivated my social media accounts during this period of sadness for our people. But I am now writing this letter believing that I have to explain the reason for the actions taken by the military as current situations have been getting worse and worse, day by day.

The violent political confrontations in Myanmar and the loss of so many young lives as the results are causing great sadness in our family. My husband U Min Aung Hlaing is also greatly saddened by these events as he had never expected them like it has turned out so far.

The main problem was the serious matters of voter fraud in last 2020 elections. Tatmadaw (Army) has already openly declared that its actions are not a military coup but just a temporary transfer of state power.

Tatmadaw is already committing to call for a genuine multi-party democratic elections once the voter fraud matters are solved. People of Myanmar should be patiently waiting for the truth to come out and eventually you will see the genuine truth coming out.

What I would also like to say is I am really saddened by the all-sided attacks on my son and daughter who are genuinely innocent and do not involve at all in the present political problems. My eldest son Aung Pyae Sone and youngest daughter Khin Thiri Thet Mon are nothing to do with present political matters.

They are just successfully operating their own businesses with their own skills as many other young men and women would in Myanmar. If people want to hate and curse at them for their successes they should only attack us the parents and we are willing to accept their hatred and curses.

My son and daughter should not be affected by current political problems. People of Myanmar should feel sorry for them as if their own children are being attacked from all sides. My daughter’s tears are burning me badly from inside.

My former teacher colleagues from the days of my teaching service in Yangon University are requested to kindly explain the truth to the youngsters and general public and guide them to do the right things.

Everyone in Myanmar should be patiently waiting for the truth to come out eventually, for right now everyone’s blood is boiling and everyone is acting hotheadedly.

Gods will take care of the truth! 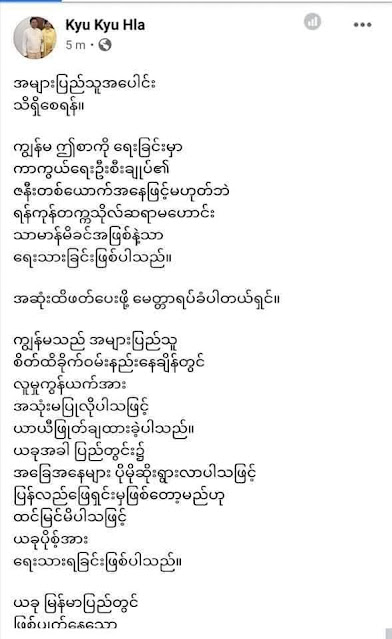 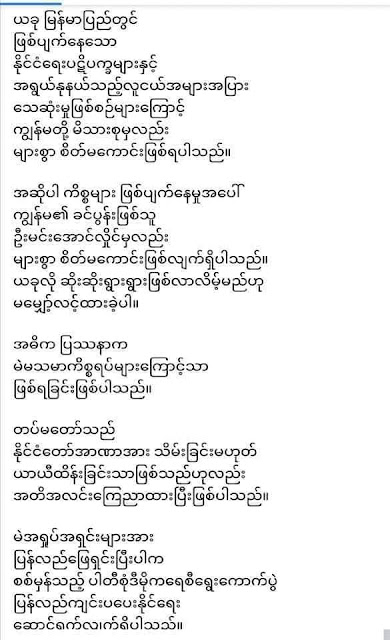 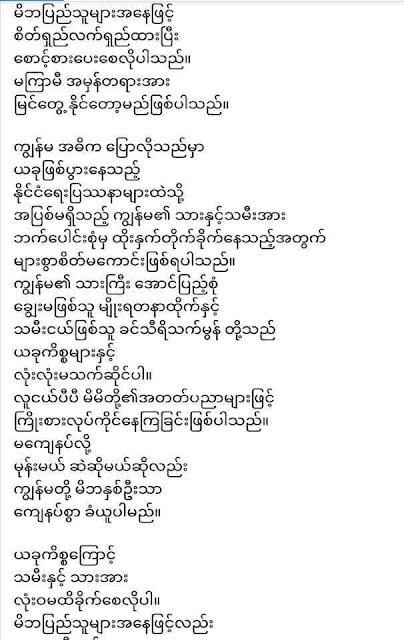 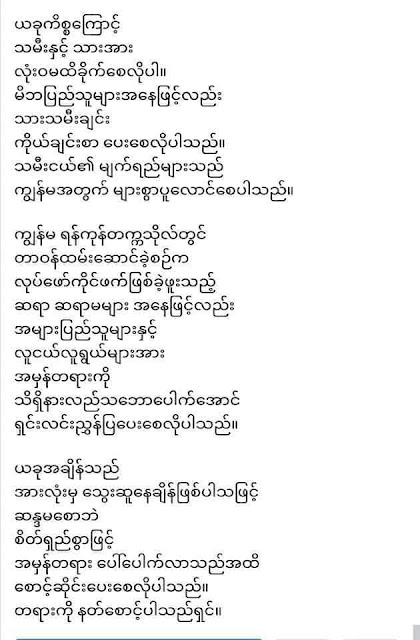 WASHINGTON – Today, the U.S. Department of the Treasury’s Office of Foreign Assets Control (OFAC) sanctioned the two adult children of the commander-in-chief of the Burmese military forces, Min Aung Hlaing, who is the leading actor in the overthrow of Burma’s democratically elected government, as well as six companies of his two adult children.  Treasury took these actions in response to the Burmese military’s coup against the democratically elected civilian government of Burma and its brutal killing of peaceful protesters.  The United States stands in solidarity with the people of Burma, and we remain committed to promoting accountability for those responsible for the coup and ongoing violence.  The United States urges the immediate release of State Counselor Aung San Suu Kyi and President Win Myint, as well as all others unjustly detained since February 1, including members of civil society, journalists, and human rights activists.

“The indiscriminate violence by Burma’s security forces against peaceful protesters is unacceptable,” said Director of the Office of Foreign Assets Control Andrea M. Gacki.  “The United States will continue to work with our international partners to press the Burmese military and police to cease all violence against peaceful protestors and to restore democracy and the rule of law in Burma.”

In today’s action, Treasury is designating Aung Pyae Sone and Khin Thiri Thet Mon pursuant to Executive Order 14014, “Blocking Property With Respect to the Situation in Burma,” for being foreign persons who are spouses or adult children of a person whose property and interests in property are blocked pursuant to E.O. 14014.  Aung Pyae Sone and Khin Thiri Thet Mon are adult children of the commander-in-chief of the Burmese military forces, Min Aung Hlaing, whom OFAC designated on February 11, 2021, for being a leader or official of the military or security forces of Burma.  Aung Pyae Sone and Khin Thiri Thet Mon have a variety of business holdings, which have directly benefitted from their father’s position and malign influence.  Aung Pyae Sone won a 30-year permit in 2013 to lease land for Yangon Restaurant and Yangon Gallery in Rangoon without facing any competing bids.  From 2013 to 2018, Aung Pyae Sone paid less than 1 percent of the rental rate compared with other properties in the same township, with the Rangoon government acknowledging that the national government dictated the low rental rates.  Meanwhile, Khin Thiri Thet Mon owns Seventh Sense, a media production business with an exclusive contract with Nay Toe, an actor who features prominently in marketing for Mytel, the mobile telephone operator established by Min Aung Hlaing.

In addition to the individuals identified above, OFAC is also designating the following six Burmese entities pursuant to E.O. 14014 for being owned or controlled by Aung Pyae Sone or Khin Thiri Thet Mon:

Today’s action follows the Department of Commerce’s Bureau of Industry and Security’s March 4, 2021 implementation of new export control restrictions on Burma and the addition of four Burmese entities to the Entity List:  the Burmese Ministry of Defence, the Burmese Ministry of Home Affairs, the Myanmar Economic Corporation, and the Myanmar Economic Holding Limited.  View the Department of Commerce’s press release on this action here.

As a result of today’s action, all property and interests in property of the individuals and entities named above, and of any entities that are owned, directly or indirectly, 50 percent or more by them, individually or with other blocked persons, that are in the United States or in the possession or control of U.S. persons, are blocked and must be reported to OFAC.  Unless authorized by a general or specific license issued by OFAC or otherwise exempt, OFAC’s regulations generally prohibit all transactions by U.S. persons or within (or transiting) the United States that involve any property or interests in property of designated or otherwise blocked persons. 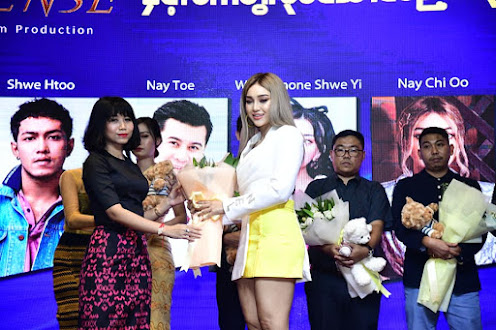 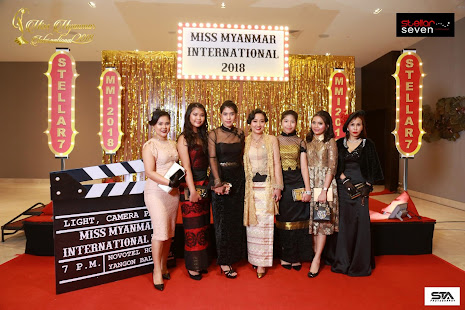 Since he became the army-chief Senior General Min Aung Hlaing regularly attended the Armed-Forces-Day ceremony held in Nay-pyi-daw on every March-27 every year. He normally gave lengthy speeches and then inspected the troops and received their marching salutes.

But people of Burma have been speculating that this year on March-27 he is so scare of assassinations he will not be appearing and even said to have cancelled the whole celebrations. Especially he is rumored to be worrying about the attacks from the suicide drones nowadays seen to be flying regularly  in Nay-pyi-daw's sky.

If he doesn't show up this year he will definitely be labelled a coward by the people including his war-dog soldiers. If he does show up like he used to last years, who knows, he would even be killed by an armed drone. Either Shame Or Death, a loss-loss scenario for our newest military dictator, but a win-win situation for our Burma and her people. 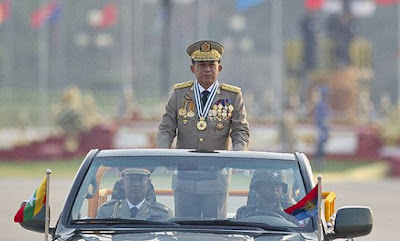 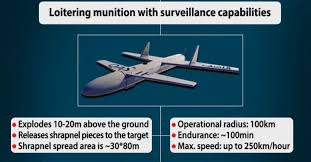