A$3,000 fine for not wearing a facemask, A$5,000 for venturing out of your home beyond 5 km, and jail sentences for violating draconian stay-at-home public health orders! Our Sydney is rapidly becoming a China-like Police State just because the stupid government does not really know what to do with rising COVID cases and associated deaths.

Borrowing from Chinese Communist Party's Playbook they just blindly forcing lockdowns after lockdowns on us and some brave sydneysiders are fighting back. Sydney Freedom-fighter Ronald McLean the 69-year-old anti-lockdown pensioner was lashed by a magistrate after claiming he was just riding past a freedom rally before assaulting a police officer.

“This courtroom has had Covid in it,” Magistrate Jennifer Giles announced as she sat down in the Downing Centre Local Court on Tuesday morning. “I’m told it’s been cleaned, but please, let’s spend as little time in it as possible.”

It was not an auspicious beginning for anyone in courtroom 4.5, but things quickly went from bad to worse for Rally 4 Freedom protester Ronald McLean, who fronted court with none of the aggression he showed at Victoria Park on July 24 when he threw pepper into the face of a riot squad officer.

The 69-year-old pensioner pleaded guilty on Tuesday to assaulting an officer in the execution of duty, taking part in an unauthorised protest in violation of public health orders, and failing to comply with a direction from police.

But the Summer Hill resident, among more than 60 arrested over the notorious anti-lockdown protest, claimed he did not own a smartphone or a computer and had no idea the rally was even happening.

“I didn’t know there was a thing on at that park, I just pulled over to see what was going on,” he told the court. “The rest is history.” A sceptical Ms Giles told him: “You can’t plead guilty and say it was all an accident.” But McLean, dressed in blue jeans, a light green jumper and a blue surgical mask, insisted on his plea. “I was there, that’s all I can say,” he said.

He told the magistrate he had worked at various hospitals and universities as a dishwasher and cleaner – “just any job they’d give me” – before retiring at 65 and taking some trips interstate. He lives off a fortnightly pension of $900 and has no family.

On July 24, whether by accident or design, McLean was at the Rally 4 Freedom at about noon as it kicked off at Victoria Park in Camperdown. There, he yelled in the face of a public order and riot squad officer before throwing pepper on his face, causing a stinging sensation in the senior constable’s mouth and eyes.

Ms Giles described his actions as “disturbing”. “It cannot have escaped even someone like you, Mr McLean, travelling around the country, we are in the midst of a pandemic. It’s a national emergency, and everybody’s got to pull their weight,” she said sharply.

“When people behave like you do, the whole social fabric starts to fall apart. When you attack a police officer at an illegal protest I’m afraid that encourages other people to do so as well. The police are hanging on by their fingernails at this point, so shame on you! You have the condemnation and denunciation of the entirety of the state against you.”

According to the police fact sheet, after his arrest McLean was generally “unapologetic” and told police if he’d had a knife, he would have stabbed them. He also smelled strongly of pepper, police said, but denied throwing it.

Court documents also revealed McLean had tried to ride his motorbike from Sydney to Wollongong earlier in the lockdown but was caught by police and turned back. He was sentenced to five months prison for attending the protest and 12 months for assaulting the officer, both to be served in the community under an intensive corrections order.

The magistrate also slapped him with a fine and a parting remark: “You need to lead a very quiet life and find some better friends.” Outside court, McLean removed his mask and told reporters: “I know nothing.”

“So why did you throw pepper on a police officer then?” a journalist asked. “He might have wanted some salad,” McLean replied, before flipping the bird to the media pack and disappearing down the street. 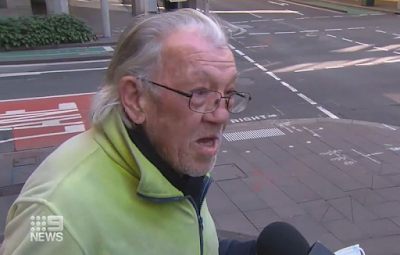 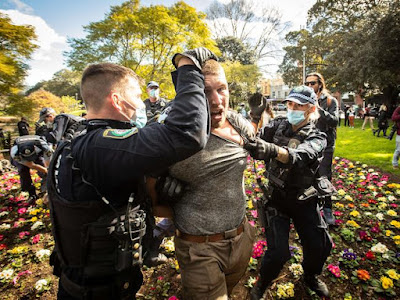 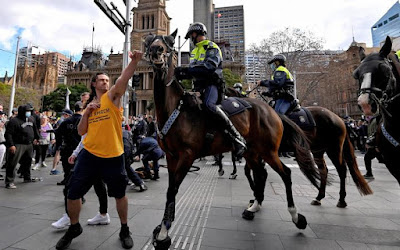 Other people charged over the protest had their matters mentioned in court on Tuesday, including Nikola Dedovic, who appeared on the front page of The Daily Telegraph the day after the rally.

He has been charged with assaulting police, resisting arrest and not complying with a noticed direction. A letter from his lawyer Martin Zanolla was read to the court and said he would be fighting the allegations. The court has previously been told that Mr Dedovic drove from Wollongong to attend the protests despite having no strong political views about the lockdown.

Lawyers for another man, Kupuovenua Sipu, successfully subpoenaed the Council of the City of Sydney for CCTV. According to a letter from Mr Sipu’s lawyers read to the court, his plea will depend on what the vision shows.

Dario Maslic said he would plead not guilty to all charges, including counts of assaulting police and wilfully obstructing an officer. Brothers Edwin and Michael Paz appeared in court and asked that their matters be adjourned to next month so that they could be dealt with alongside another brother Anthony Paz, who was also charged for attending the protests.